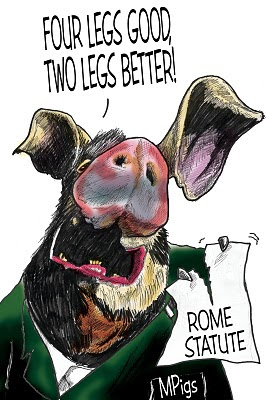 The other day, I got to thinking about the President's New Year message to the nation and especially his rather oblique references to the indictments expected to be handed down by the ICC. While I do not expect that he will do our MPigs bidding and assent to their ludicrous attempt to pull us out of the Rome Statute, I nonetheless still believe that he shares their ultimate goal: to preserve the culture of impunity by protecting the organizers of the post-election violence. The only difference is that he proposes to do it, not through an unconstitutional Act of Parliament, but through a wholly incredible and implausible local tribunal.

Incredible because no one in their right mind actually believes that there exists the political will to actually dispense justice to the coterie of murderers named by the ICC prosecutor, Louis Moreno Ocampo. Otherwise, arrests would have taken place two years ago and by now their cases would be nearing completion.

Implausible because, as the President put it: "We must all take due care to ensure that the process of seeking justice, does not erode the gains we have made in the direction of national healing and reconciliation." So there we have it. The priority for a local tribunal is not to ensure that criminals get their due but rather to preserve the "gains" secured by the reconciliation process, which gains mainly consist of lucrative positions for the masterminds of the violence.

The truth is Kenyans today find themselves in the modern-day Manor Farm, witnessing what appears to be a row in the farmhouse. Mwai Kibaki and Isaac Ruto are each attempting to play an ace of spades simultaneously. Though voices may be raised, they are all alike. No question, now, what has happened. The citizens may look from MPig to President, and from President to MPig, and from MPig to President again; but already it is impossible to say which is which.
Posted by Gathara at 6:31 PM