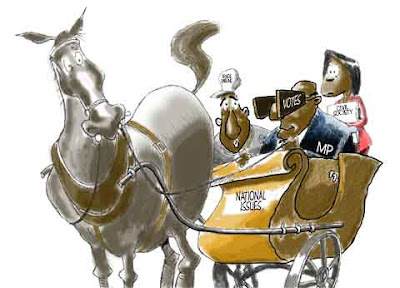 This morning I listened to Raila being interviewed by Patrick Quarco of Kiss FM on his candidature. Interestingly, Raila says that Jua Kali business is a contributor to poverty, that as President he would grant a general amnesty for past economic crimes with only the proviso that those involved own up and return their loot (i.e. no prosecutions), and that an ODM administration would raise the necessary cash to implement free secondary education by stopping theft of public resources while at the same time admitting that free primary education has been an unmitigated failure in the sense that kids are in school but no learning is taking place. On insecurity, Raila seems to believe that all crime is a socio-economic phenomenon that can only be solved through better economic policies and not by better policing.

On the first point, it seems strange that someone campaigning under the banner of redistributing the benefits of economic growth and reducing unemployment should be against a sector of the economy that for the past 2 decades has been the largest source of employment for urban poor. When the economy was languishing under Moi and formal sector companies were either closing shop or downsizing their workforce, it was the Jua Kali businesses that kept Kenya afloat. The vast majority of jobs were created in this sector as has been admitted by the current government and the sector's importance is illustrated by the growing realisation by banks and financial institutions that there's a lot of money to be made by servicing it.

Secondly, Raila faults the Kibaki for not implementing the recommendations of the Goldenberg Commission and for largely turning a blind eye to grand corruption within his administration. The Goldenberg report did not recommend amnesty but rather prosecutions. If a Raila administration was to grant an amnesty, it is unclear to me how this would be a deterrent to future corruption.

On crime, it surely obvious that poverty is no excuse for criminal activity. Better economics would help but, as noted by J. Edgar Hoover, only certain and timely punishment deters crime. Raising police wages would do for that institution what raising parliamentary salaries has done for the House -absolutely nothing. In fact, in the latter case, the wage hikes simply served to whet their appetite for further acquisition. Integrity cannot be bought. Better living conditions will never eradicate crime. To do that we must insist on integrity, better training, professionalism and independence in our law-enforcement officers and not just seek to give them better pay as a reward for their woeful performance.

Finally, instead of fixing the problems created by free primary education, Agwambo proposes to export these woes to secondary education. The lack of facilities and personnel witnessed at the primary level are multiplied when one looks at the secondary school scenario. It is unlikely that in the event of a Raila win that corrupt bureaucrats would suddenly cease their thieving ways in order to provide the resources for free secondary schooling as the candidate seems to hope (an outcome made even more remote by his promise of an amnesty).

I hope that the ODMites here can explain the seeming inconsistencies in their candidate's proposals. It is not enough to point out the Kibaki's many failures. If we want to do better, we must insist that whoever wishes to replace him desists from giving us half-baked-pie-in-the-sky promises and seriously addresses the issues.
Posted by Gathara at 9:32 AM 4 comments: