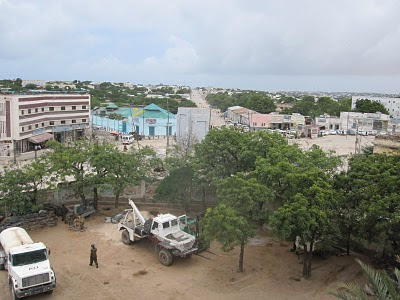 The view from an Amisom position overlooking a busy intersection at Kilometre 4 in Mogadishu. Civilian lfe is slowly returning to normal in areas under the peacekeepers control

The “terminal” Ramadan offensive by Al Shabab, the extremist group fighting to overthrow Somalia’s internationally-recognized Transitional Federal Government and impose an extreme form of Islamic law, seems to have run out of steam. Barely three weeks after declaring they would drive AU peacekeepers out Somalia and erase the TFG presence, the militants top command have reportedly gathered in Baidoa to review their Ramadan operations amid reports of mass desertions and huge complaints from the populace as fighters are returned to their villages scarred, injured or dead. All indications point to complete disarray within the extremists ranks, dwindling public support and an inability to decide on their next course of action.

Unable to dislodge the peacekeepers, the Al Qaida-aligned extremists, under the tutelage of foreign fighters, have turned on the civilian population. On August 24, militants wearing Somali military uniforms stormed Muna hotel in Mogadishu, firing indiscriminately and killing close to 40 people, including six parliamentarians. A day later, a roadside bomb killed 15 people, including several school children. Just last week, a suicide attack on the Aden Ade International Airport claimed the lives of 9.

The militants’ tactics are increasingly alienating them from the local population. A sign of their desperation came this week when a spokesman for the militants reportedly went on radio to appeal for public support, money, food and even blood donations. The call came as reports emerged of a crowd walking out of a Mosque in protest at the Mullah's support for the Shabab. Other reports have pointed to civilians leaving areas under Shabab control and streaming into those under the TFG and AMISOM where they can access medical attention and humanitarian aid. AMISOM already distributes 1.8 million litres of clean drinking water to civilians living near its bases in addition to providing them with free medical services at its hospital and outpatient clinics.

Following the failure of the offensive, sources at AMISOM say, the Shabab are probably at the weakest they have been since 2006, having taken hundreds of casualties while achieving little in terms of strategic gains. However, the AU peacekeepers, hamstrung by a restrictive mandate and a shortage of troops, are unable to capitalize on this to push the extremists out of the city altogether.

The 7000-strong AMISOM force has been in Somalia since 2007 in support of the decade-old peace process and the government generated by it. For most of that time, despite being undermanned and underequipped, they have successfully held of repeated attacks by the Islamist rebels. The troops, drawn from Uganda and Burundi, are only authorized to fire in self-defense and in defense of critical infrastructure and civilians.
During Ramadan, the AU peacekeepers, working closely with Somali government forces, managed to secure key positions and civilian areas in the Somali capital. One company from the Burundi contingent recently deployed to Hoshi, which guards the south-western route into the city, in support of Transitional Federal Government troops there who had come under attack from the Shabab. The location is critical to securing the neighbourhood of Medina, and also serves to extend the defenses of the Mogadishu National University campus where the contingent has its main base.

Col. Aloys Sindayihebura, the Deputy Burundi Contingent Commander, and Col. Agi, a senior TFG commander, accompanied journalists on a tour of the base, which basically comprises two compounds on either side of Kabka road, one of the city’s main arteries and a crucial supply route.

Addressing the reporters, the two officers were candid about the challenges facing the fledgling Somali army and the need for continued AMISOM support. The TFG, said Col. Agi, had problems paying salaries and providing meals to his troops. He acknowledged that this was having an adverse effect on recruitment. “Some of my soldiers have gone nearly 5 months without pay,” he said.

In addition to Hoshi and the University, the Burundi contingent has 4 other bases along Kabka road covering the area between Madina and Gaashandiga, including one at the Siad Barre Military Academy. Burundi soldiers are also deployed in two bases at Al Jazeera, guarding the southern approach to the Aden Ade International Airport, where the main AMISOM Force Headquarters are located.

Kilometre 4, a public square in the city, is now a hive of bustling activity as people go about their business free from the fear of insurgent attack. This followed the opening of a new AMISOM base at Coca Cola village, just a day into the militant’s offensive. Giving journalists a tour of the new position, the commander of the Ugandan contingent, Col. Michael Ondoga, said the base was necessary to reinforce weaker TFG positions and to deny the militants mortar range. Prior to that, al-Shabab attacks had killed 7 people at K4, including 6 at a nearby camp for the displaced.

At another outpost bordering the northern district of Bondere, AMISOM troops are sandwiched between Villa Somalia, the seat of the Transitional Federal Government, and al Shabab positions to the north and east. The hilltop encampment is on territory formerly used by the Shabab to shell the Presidential Palace and surrounding civilian areas. It was taken on July 21 following three days of heavy fighting which cost the lives of 2 AMISOM troops and those of over 70 Shabab fighters.

Posted by Gathara at 4:19 PM No comments: 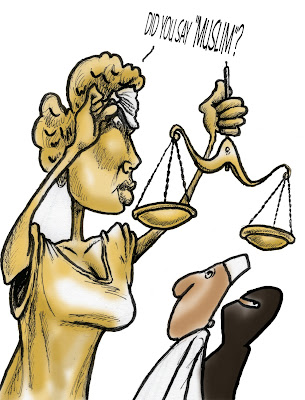 Posted by Gathara at 3:10 AM No comments: 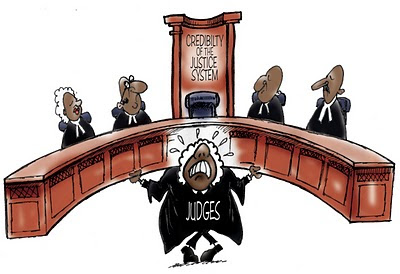 Posted by Gathara at 2:55 AM No comments:

You could say South Africa has a problem with AIDS. And not just because the condition kills 1000 South Africans every day. The nation is still working to correct the damage done by years of "Aids denialism" under the leadership of former president Thabo Mbeki, who delayed the roll out of life-saving anti retro-viral drugs, while his health minister suggested a diet of beetroot and garlic could cure the virus. Now a pastor has at the non-denominational Way of Life church in Khayelitsha, near Cape Town, has hit upon a novel way to change attitudes. He recently caused outrage by preaching a sermon entitled "Jesus was HIV positive". Reverend Xola Skosana, who has lost two sisters to the disease, said his sermon was designed to combat the stigma surrounding HIV and Aids. His approach has been praised by Aids campaigners in the country but condemned by some Christians, who accuse him of portraying Jesus as sexually promiscuous. WWJD?

__________________________________
Ghana on the other hand, has issues with English. Recently the leader of the main opposition National Patriotic Party sparked controversy by calling President Atta Mills "Professor Dolittle". For a week, the full machinery of the state was deployed to counter this. While that controversy raged, an even greater row broke out when the chairman of Mills' National Democratic Congress called for a purge of the judiciary. This in a country where the word "purge" evokes images of nasty medicines for bodily functions. The idea of party officials lining up judges and forcing purgatives down their throats or rectums to empty their stomach contents drove tensions up. Things got worse when he was asked how he intended to do the purging. "There are many ways of killing a cat," declared the NDC chairman, who comes from a region where cats are considered a delicacy. And again, this in a country where independent-minded judges have in the past been abducted and murdered by government goons. Eventually, President Mills calmed the furore by assuring all that he had no intention of interfering with the judiciary and even thanked his opponent for not calling him “Professor Do-nothing”!

Africans in general have a problem with the weather. Not only do thousands perish every year from the results of droughts and floods, but some have also taken to blaming climate change for the seemingly interminable wars on the continent. Last year, a research paper suggested that climate had been a major driver of armed conflict, and that future warming was likely to increase the number of deaths from war. However, recent study suggests that this is not the case and challenges assumptions that environmental disasters, such as drought and prolonged heat waves, had played a part in triggering unrest. The findings, which have been published in the Proceedings of the National Academy of Sciences (PNAS) in the United States, instead blame traditional factors - such as poverty and social tensions - for the outbreak of conflicts. One might also include traditional, melanin-induced, stupidity.

Chimpanzees in the wild don’t take too kindly to snares. And now the primates are learning to outwit their human hunters. Researchers in the rainforests of Guinea are going ape over the discovery that chimps have not only learnt to recognise snares but, astonishingly, intentionally seek the traps out and deactivate them, setting them off without being harmed. The observation was serendipitously made by primatologists Gaku Ohashi and Professor Tetsuro Matsuzawa who were following chimps living in Bossou, Guinea to study the apes' social behaviour. The two, from the Primate Research Institute at Kyoto University, Japan, observed five male chimps, both juvenile and adult, attempting to break and deactivate snares on at least six separate occasions. On two of them, the traps were successfully deactivated. In all cases, the chimps avoided touching the dangerous part of the snare, the wire loop.

__________________________________
Jemaine Jackson, brother of the late pop sensation, Michael, obviously has no problem with torture and repression. In May, the pop star, who was attending the birthday celebrations of Gambia’s President Yahya Jammeh, declared that the dictator, who is famous for a herbal concoction that he claims can cure AIDS on Thursdays, was “doing a wonderful job, and putting a smile on the faces of the people… He's not just a politician; he's a wonderful, genuine person." It’s enough to make one question whether the President’s birthday fell on a Thursday, and whether he shared his concoction with the guests. At the very least, it is a cautionary tale for those who confuse celebrity with intelligence or wisdom.

Posted by Gathara at 2:36 AM No comments:

Email ThisBlogThis!Share to TwitterShare to FacebookShare to Pinterest
Labels: Last Word, The EastAfrican 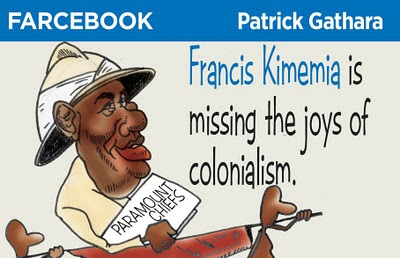 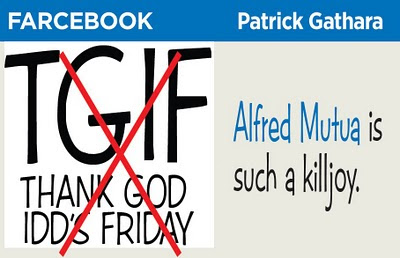 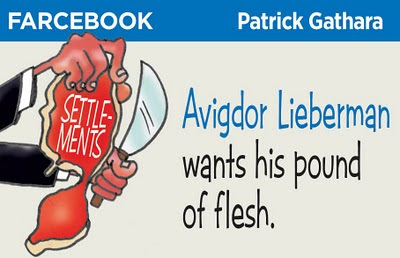 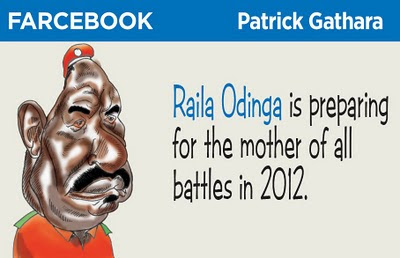 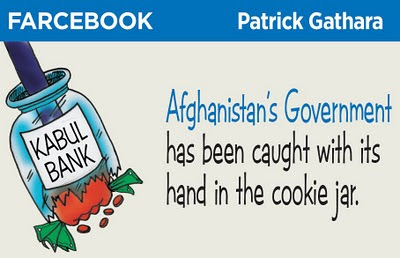 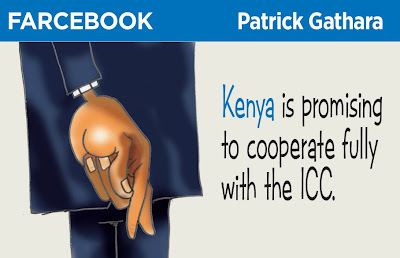 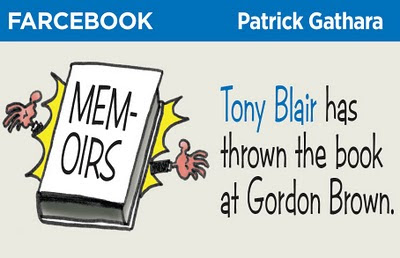 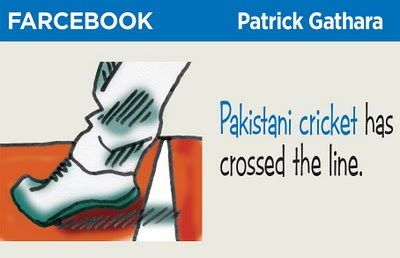 Posted by Gathara at 2:02 AM No comments: