Are Kenyans Ready For The Coming Storm? 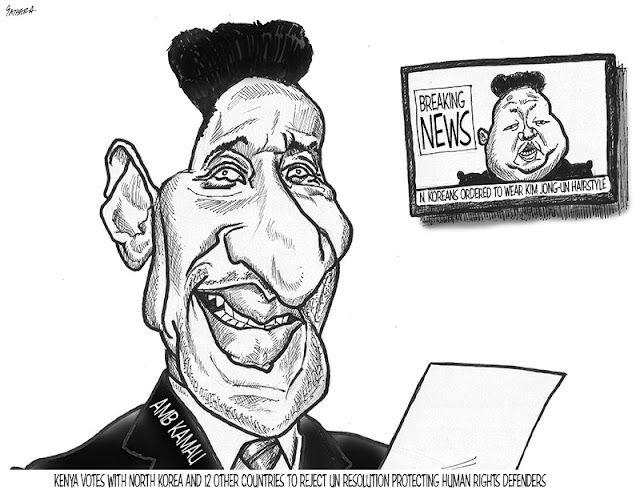 "Show me a man's friends, and I'll tell you who he is," said American essayist, lecturer, and poet Ralph Waldo Emerson. And this week, the Jubilee administration has shown us who its friends are.

“Civil society, media and leaders from across our political social spectrum have come together and made their views known and in the hearts of every Kenyan we know that we must win this war [on corruption]” declared President Uhuru Kenyatta when welcoming Pope Francis on his maiden visit to Africa. At The Hague and in New York, however, his minions were using very different language.

At the former, the government, with the support of the entire political establishment, was engaged in an effort to get the Assembly of Parties to the Rome Statute to dictate to the International Criminal Court how it is to interpret the rules of evidence. The fuss was brought on by the Court’s decision to apply rule 68, which allows for the consideration of recanted testimony, to the cases facing Deputy President William Ruto and journalist Joshua Sang.

Setting aside for a moment the merits of the government’s argument that it was assured this wouldn’t happen (for which there appears some justification) and that the use of recanted testimony is inherently unjust (much more dubious), the fact is that this issue is still under active consideration by the court, the accused having appealed the decision of the Trial Chamber. Like the dictators of Kenya’s past, the government wanted to decree the outcome of that appeal.

Now, Kenya’s famously vocal civil society wasn’t about to let this travesty happen without a fight. So, it too sent a team to make representations to the ASP. They were seemingly quite effective as very soon the government side, which was spending over Ksh 100 million in public money on what President Kenyatta in 2013 assured us was “a personal challenge”, slipped back into its old habits of demonization and delegitimization. Talk of “evil society” and threats to brand legitimate Kenyan NGOs as “foreign agents” suddenly resurfaced.

However, this time the regime went a little further. In what has to be an all-time low for Kenyan diplomacy, at the United Nations General Assembly the government teamed up with the likes of North Korea, Myanmar, Iran and Sudan in an ultimately unsuccessful attempt to shoot down a UN resolution recognising and protecting the role of human rights defenders. Kenya was among only 14 countries, the vast majority of them brutal dictatorships, to vote against the resolution. It was a thinly disguised attempt to scare local human rights activists, and perhaps to punish them for their opposition to the Uhuru administration’s agenda at the ASP.

By rejecting a resolution adopted by two-thirds of Member States and that calls for accountability for attacks on human rights defenders and their families as well as urging states to release defenders who have been arbitrarily detained, the Uhuru regime has once again let its mask of civility slip. The pretense of tolerance, of fidelity to the constitution and the rule of law had already been badly undermined by unending corruption scandals and the government’s own penchant for scapegoating entire communities, dissenters, media and civil society under the guise of fighting terrorism. But its fangs are only truly bared when it comes to the cases before the ICC.

The government has only ever been interested in getting these cases lifted, not injustice. That much is clear to anyone who cares to look. Its indifference to (and likely collusion in) the disappearance, intimidation and bribery of witnesses as well as its sustained campaign to delegitimize the Court proves as much. Anyone who stands in the way is fair game. Thus it is the civil society groups that were at the forefront of the demands for accountability for the 2008 post-election violence have borne the brunt of the government’s assault.

It is to their eternal credit that the likes of Africog’s Gladwell Otieno have refused to be cowed in the face of this onslaught. However, it is undeniable that the space for dissenting opinion is rapidly shrinking. The vote at the UN, coupled with the recent arrest of journalists for daring to report on queries by the Auditor-General into suspicious procurement at the Interior Ministry as well as the President’s assertion that any media reporting on corruption allegations would be required to provide evidence of the same, illustrate the government’s determination and increasingly brazen attempts to roll back the freedoms guaranteed by the 2010 constitution as well as to crush any prospects for accountability, not only for the deaths, injuries, rapes and displacement of 2008, but also for the continuing looting that impoverishes Kenya.

And given the crowd that their government is now running with, Kenyans would be prudent to prepare for the coming storm.

The reaction to the terrible attacks in France and continuing anti-terror operations across Europe will sound familiar to many Kenyans but should make them sit up and listen nonetheless. Across the world, the rhetoric of war, the beefing up of security forces’ presence in our lives,  and the benumbed acquiescence of the citizenry to this governmental power grab have for the last four years almost become the de rigueur response to terror attacks.

From Paris to Nairobi, terrorists are decidedly succeeding in scaring people into abandoning long-cherished notions of liberté, égalité, fraternité and are consequently empowering and emboldening governments to act in ever more undemocratic and unaccountable ways. Democratic constitutions designed to contain the power of states are seeming ever more quaint and anachronistic in an era where regimes have reinvented themselves as protectors rather than oppressors of the people.

Today lockdowns, emergency powers, mass surveillance, armed police on the streets, criminalization of thoughts, expression and even dress are fast becoming an indispensable attributes of a “free society”. The diminution and sacrifice of civil liberties is seen as necessary to earn the favour and protection of temporal potentates.

Back to Paris, which has now suffered a second, high casualty terror incident in the space of less than twelve months. So far, criticism of the French security and intelligence services has been muted, even within France. This is understandable given the outpouring of sympathy the attacks have provoked. However, when a conversation on how men and women could smuggle military-grade weapons and suicide belts into the heart of the city does get under way, it will almost inevitably result in more assaults on liberté. Already, the French Parliament has voted to extend a state of emergency which grants “the police and military greater powers of search and arrest, and local governments the right to ban demonstrations and impose curfews” for another three months.

In Kenya, pro-government types have already begun to latch on to the idea of uniting behind the regime as an example of how we should respond to attacks. “French opposition stands with the govt amidst #ParisAttacks..in kenya theyd be calling on the president to resign” went one tweet. In times of terror, they would have us believe, the government can do no wrong. The warped definitions of patriotism being forced down Kenyans’ throats essentially boil down to “my government, right or wrong”.

Anyone querying the narratives coming out of the Uhuru Kenyatta administration risks being branded a terrorist sympathiser.  National security has become the carpet which covers all ills. When a recent report exposed syndicates within the Kenya Defence Forces smuggling charcoal and sugar in southern Somalia where they are deployed as part of the AU peacekeeping force, the report’s authors were immediately condemned as unpatriotic and malevolent agents. The KDF spokesman went on national TV to announce that the KDF had “quietly” begun investigating them and their sources. Meanwhile, the allegations, which have consistently been made by others including the UN Monitoring Group on Somalia and Eritrea as well as independent journalists, went unanswered.

Similarly, when, a few weeks ago, journalists reported on security procurement queries raised by the Auditor-General, they were immediately summoned and one arrested by police apparently on the orders of Internal Security Minister Joseph Ole Nkaissery, who demanded they reveal their sources. Ironically, they were accused of endangering public safety for reporting that the Auditor-General had specifically stated that the “purchase of second-hand arms and ammunition… from ‘friendly manufacturers’” had “seriously compromis[ed] the operations of the security agencies”. Of course, like with KDF smuggling, little to date has been said about an investigation.

Our ears should thus prick up when President Kenyatta declares corruption a threat to national security. This is not to say that graft does not threaten the very fabric of the nation. It undoubtedly does. However, a glance at the opaque and unconstitutional means the Uhuru administration has adopted to deal with other national security threats, such as terrorism, should give us some pause. They have resulted in laws that, instead of tackling terrorists, have vastly expanded the powers of government and targeted its opponents as well as the media’s ability to report on terror attacks. The above example of Nkaissery’s mendacity demonstrates that the government has few qualms about using “national security” to shield itself from public scrutiny. Therefore, allowing it to frame the struggle against corruption in the language of national security carries significant risks.

The reason Kenyans should keep a wary eye on European reactions is because the administration will almost inevitably seek to legitimize its own bad behaviour and lack of accountability by referring to them. It will argue that the citizens of this “mature” democracy are blazing a trail we should all follow, one of unquestioning loyalty and obedience to the authorities. Just as few in France are today interrogating the retaliatory bombardment of the Islamic State “capital” of Raqqa in Syria, so Kenyans are encouraged to gloss over the reasons for and achievements of the 2011 invasion of Somalia.

Security, we are told, is a prerequisite for liberty. And in our terrorized times, this has translated to a preference for more brawny and less brainy states. However, beefy governments rarely countenance civil liberties. We conveniently forget that throughout history, it has been governments that have been the main agents of terror. And that from Burundi to North Korea, they continue to be the main perpetrators of it. True Al Qaeda, Al Shabaab, ISIS, Boko Haram and their counterparts across the globe horrible savage and vicious collections of mass murderers who need to be determinedly fought. According to the 2015 Global Terrorism Index, last year terror groups were responsible for 32,658 deaths last year, the highest death toll ever recorded.

However, it pales into comparison compared to the deaths caused by governments which US political scientist RJ Rummel estimated to be in the order of 262 million over the last century – an average of  over 2.5 million a year.  Government’s cause death and suffering on an exponential scale. There's even a term for it: democide. Beefing them up so they can supposedly more effectively and efficiently fight terrorists may very well be jumping from the frying pan into the fire.

It is also important to remember another of Rummel’s findings: “Concentrated political power is the most dangerous thing on earth ….The more power a regime has, the more likely people will be killed. This is a major reason for promoting freedom." Democracies which fragment and distribute power are much less of a threat to their citizens than totalitarian regimes where power is concentrated in the executive or in the leader.

Given the above, here’s the really bad news: And, as Canadian MP, Elizabeth May, noted last year: “Once we give up our rights and liberties, it's very hard to get them back.” Rousseau was even gloomier. “Free people remember this maxim: we may acquire liberty, but it is never recovered if it is once lost.”
Posted by Gathara at 11:28 PM No comments: