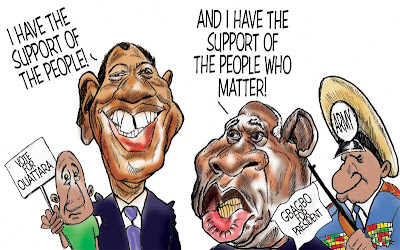 Why doesn't Laurent Gbagbo wake up and smell the cocoa? That is the question on the minds of many watching the unfolding events in the Ivory Coast. However, seen through the prism of recent closely fought elections on the continent, Gbagbo's actions are not only rational, but also sadly predictable.

The script was pioneered right here in Kenya: A relatively free and remarkably violence-free campaign -followed by an equally remarkably peaceful election- give way to a delay in announcing the presidential poll results, sparking a dispute over the count. The incumbent is then declared the winner (despite all evidence to the contrary) and hastily organizes an inauguration. A violent stand-off with the opposition quickly ensues followed by internationally mediated talks resulting in the incumbent retaining his position. The erstwhile "real winner" gets a prime-ministership and a share of the government in return for his acquiescence in the robbery.

That, in brief, is how you rig an election nowadays.

Zimbabwe's Robert Mugabe was quick to cotton on to the benefits of the plan. Now it's Gbagbo's turn. He probably thinks that all he has to do is tough it out for a few more weeks and the West, anxious that the world might run out of chocolate, will cave in and call for a negotiated settlement of the "dispute." This would, of course, mean that Gbagbo would participate in such talks as de facto head of state ala Mwai Kibaki.

Welcome to African Democracy where we are all winners, even when we lose.

excellent article, and now Raila is the Annan there to make it even more interesting