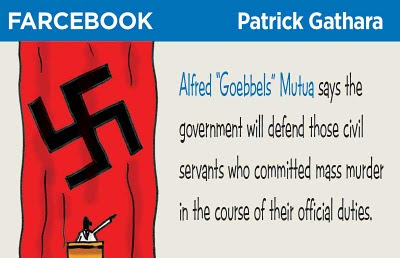 "Do not underestimate the predictability of stupidity," warned Vinnie Jones in the British movie, Snatch. Kenyan politics is a monument to the veracity of that statement.

At the height of post-election violence, our politicians were falling over themselves to present cases to the International Criminal Court. Both ODM and PNU sent teams to The Hague, each arguing the case for prosecution of the other for crimes against humanity.

So convinced were they of the remoteness of the possibility of that ever occuring, that they time and again spurned the opportunity to create a credible (read malleable) local tribunal to provide a veneer of juridical respectability to the impunity with which they killed and murdered.

Now that that remote possibility has become a very real probability, the fools are closing ranks and like dogs to the vomit, reviving talk of local trials. In their panic, they are lashing out at anything and everything. The new constitution, the ICC, party leadership. They are not above looting the national treasury to pay their cronies' legal bills.

None of this should come as a surprise. Anyone who has anything more than a passing acquaintance with our politics understands that the average MP or government mandarin has the intelligence of a fencepost, however many university degrees he/she may hold. Blinded by their greed and stupefied by their seeming invicibility, they cannot identify "national interest" if it bit them in the rear.

However, there is one other group of Kenyans that better fits into Vinnie Jones' description. And that is the Kenyan voter, who time and again offers up his body and treasure to these parasites. Every 5 years, he will predictably rotate out 60-70% of idiots in Parliament replacing them with other fools. Always willing to let bygones be bygones, the Kenyan voter will never scrutinise CVs, never demand proof of integrity. To wipe the slate clean, all he demands is a public and superficial show of religiosity and a defection to whatever party catches his fancy at the moment.

The truth is, our politicians are a reflection of ourselves. Instead of continually beating our breasts at their latest affront to common sense, we should be asking ourselves what part we play in this tragicomedy and trying to be little less predictable. To paraphrase another well known Hollywood line, "stupid is as stupid votes."
Posted by Gathara at 8:10 PM

Haha how true. Rant co-signed. A wise lady used to tell me people get the leaders they deserve and back then young and naive i thought that was utter madness...but lo and behold it is true and will continue to hold true until the average kenyan wants better and can do better for themselves, their community and their children (its not like the future depends on them).Excellent rant.