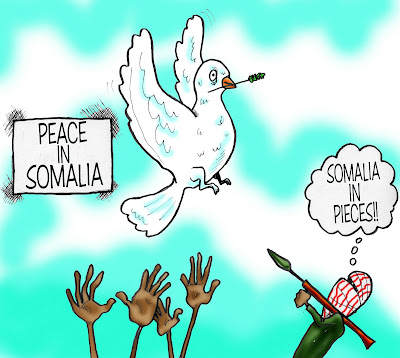 The backbone of the Djibouti Peace Process is a 2008 peace accord signed in neighboring Djibouti between the Transitional Federal Government (TFG) and the Alliance for the Re-liberation of Somalia (ARS) that is meant to pave the way for the cessation of all armed conflict across the country. The 11-point agreement expanded the parliament to include representatives of the opposition alliance and civil society.

The first phase of the Djibouti talks resulted in agreement on the formation of a new Transitional Federal Government in early 2009. This included the expansion of the Parliament from 275 to 550 members, to bring in ARS parliamentarians and an expanded cabinet. It also requested the UN to deploy an international stabilization force from “countries that are friends of Somalia" excluding the neighboring countries, and the withdrawal of Ethiopian troops from Somalia.

The Djibouti process, which has the support of the international community, including the United Nations, the African Union, the European Union, and the United States, is itself just the latest step in the broader process of political settlement and peacemaking in Somalia, which began almost immediately after the outbreak of hostilities. It builds upon the achievements of the earlier efforts. The challenge, as always, is to cement the gains that have been made, and to draw others into a constructive dialogue and out of a cycle of violence.

Following the ouster of Siyad Barre in 1991, the first two international reconciliation meetings aimed at re-establishing a Somali government took place in Djibouti in June and July 1991. Six organizations participated. An agreement endorsing Ali Mahdi as president was immediately rejected by General Muhammad Farah Aidid, and a bloody civil war in Mogadishu and the south ensued.

From November 1996 to January 1997, a conference on national reconciliation was held in Sodere, Ethiopia. It created a 41-member National Salvation Council (NSC) charged with the responsibility of organising a transitional government. The conference was, however, boycotted by Hussein Farrah Aidid, (now leader of his father’s faction following Gen. Aidid’s death) and by the government of Somaliland. A similar conference in Sana'a, Yemen, did not include all the parties of the conflict, and was rejected by those not attending.

A fourth reconciliation meeting in Cairo, Egypt, in December 1997 saw 28 signatories to the ensuing agreement, including both Ali Mahdi and Hussein Farrah Aidid. The "Cairo Declaration" provided for a 13-person Council of Presidents, a prime minister, and a national assembly but left the country without a national leader.

Officially dubbed the Somalia National Peace Conference (SNPC), and sometimes called the Djibouti conference, this was a series of meetings held in Arta, Djibouti, from 20 April – 5 May 2000. In contrast to previous reconciliation meetings, the Arta conference included extensive participation by unarmed civic leaders – intellectuals, clan and religious leaders and members of the business community. It culminated with the Arta Declaration and the formation of the Transitional National Government (TNG), the first Somali government since 1991 to secure a measure of international recognition, enabling Somalia to reoccupy its seat at the UN and in regional bodies. The TNG was opposed by a rival pan-Somali governmental movement, known as the Somalia Reconciliation and Restoration Council (SRRC), made up of warlords from different regions of the country.

In an effort to reconcile the TNG with its SRRC adversaries, Intergovernmental Authority on Development (IGAD) in Eastern Africa launched a fresh national reconciliation process before the TNG mandate had ended. This process eventually developed into a sixth major Somali reconciliation meeting, the Somali National Reconciliation Conference, held in Eldoret, Kenya, in October 2002. It produced a ceasefire agreement signed by 24 faction leaders stipulating the need to create a federal structure, reversing the unitary structure established at Arta.

The 15th Somali National Reconciliation Conference (SNRC) was held in Nairobi, Kenya, in September 2003. The Initiative to convene the conference was endorsed by the IGAD summit of 2003 and supported by the AU, the Arab League and the UN. At the conference, the TNG and the SRRC were reconciled, and a new united movement subsequently developed, dubbed the Transitional Federal Government (TFG). The Conference was successfully concluded with the formal adoption of a Federal Transitional Charter.

Following the defeat of the Islamic Courts Union, more than 3,000 people from all of Somalia's regions and clans as well as the Somali Diaspora participated in a National Reconciliation Conference convened by the TFG in Mogadishu from 15 July - 30 August 2007. Offshoots of the ICU and opposition leaders, however, held a separate meeting in Asmara, Eritrea, where they joined forces to fight the TFG under the banner of the Alliance for the Re-liberation of Somalia (ARS).
Posted by Gathara at 8:07 AM No comments: