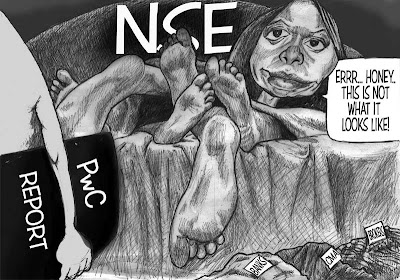 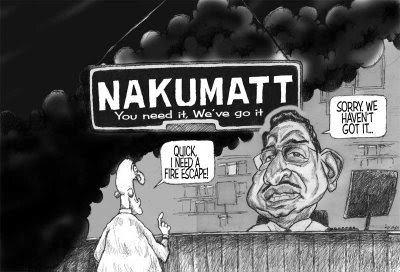 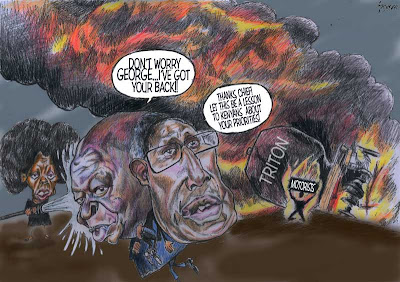 Posted by Gathara at 5:16 PM No comments: 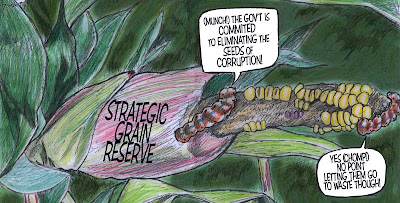 A friend of mine once observed that no nation with a free press ever suffered a famine. He was obviously paraphrasing Amartya Sen's famous declaration that "no famine has ever taken place in the history of the world in a functioning democracy". However this powerful dictum seems lost on our leaders and our people. We still blame Mother Nature's stinginess with rain for the starvation that stalks us with depressing regularity.
Fact is famine is not an act of nature. Famine is always caused by government. It is the result, not of a deficit of food, but of a deficit of democracy. In his Democracy as a Universal Value Sen states:

Famines are easy to prevent if there is a serious effort to do so, and a democratic government, facing elections and criticisms from opposition parties and independent newspapers, cannot help but make such an effort.

And further, in Development as Freedom, he argues that "a free press and an active political opposition constitute the best early-warning system a country threaten by famines can have". And on both counts, Kenya fares extremely poorly.
Ever since the political class blackmailed us into accepting the coalition government as part of a ceasefire to end the carnage of early 2008, we have had no political opposition to speak of. The parties in government together have an overwhelming majority in Parliament and Cabinet ministers and their assistants actually outnumber backbenchers. And while the latter have been vocal in trying to keep the Executive on its toes, the recent reappointment of Amos Kimunya to Cabinet has shown just how little clout they actually have.
Government attacks on media freedom have also become a defining feature of the President Kibaki's tenure. No less the 4 Bills have been crafted and introduced in Parliament seeking to muzzle the Press. Two have passed and one has been signed into law. In addition, arrests of journalists and raids of media houses by hooded police and by the First Lady create an air of intimidation. So much so that even the largest media house in East Africa is afraid to broadcast its own footage of a Cabinet minister apparently confessing to orchestrating the murder of 600 people.
And when we starve we still blame God and the elements, flock to churches to beg for forgiveness for sins we neither admit nor comprehend. It is a sadly typically Kenyan reaction to avoidable disaster: when tens died in a fire less than 500m from the Fire Station, in a building full of combustible material where the fire exits were boarded up and which lacks any discernible automatic fire suppresson equipment; when over a hundred people perish while looting petrol and two days later the same thing is happening 30 km away; when 10 million go hungry because the very politicians proclaiming national emergencies have been busy looting the national granary.
Think about that next time you ask God why these things keep happening to us.
UPDATE
Today KISS FM and their sister radio stations have announced a new initiative to get more food to starving families. It's called 24 hours for Kenya and aims to, in their words, solve the hunger problem in one day so we can get on with other things. While I applaud their intentions, it is exactly this kind of thinking (or non-thinking) that guarantees famines will be with us for the foreseeable future. Not only is it plainly ridiculous to suggest that the crisis can be resolved in a matter of hours by the donation of a few basic food items, the message inherent in their ad for the campaign (every moment spent thinking about the famine costs lives) actually urges us not to concern ourselves with issues like where the maize in the Strategic Grain Reserve went, or who's to blame for the lack of preparation. By demanding that we provide emergency relief (which we should) and ignore the governance reasons that led to this crisis (which we shouldn't), such well-intentioned initiatives end up providing a salve for our national conscience while doing little to alleviate, and in the long term actually guaranteeing, the continued suffering of millions.
Posted by Gathara at 8:40 PM No comments: