A Monument To Exclusion 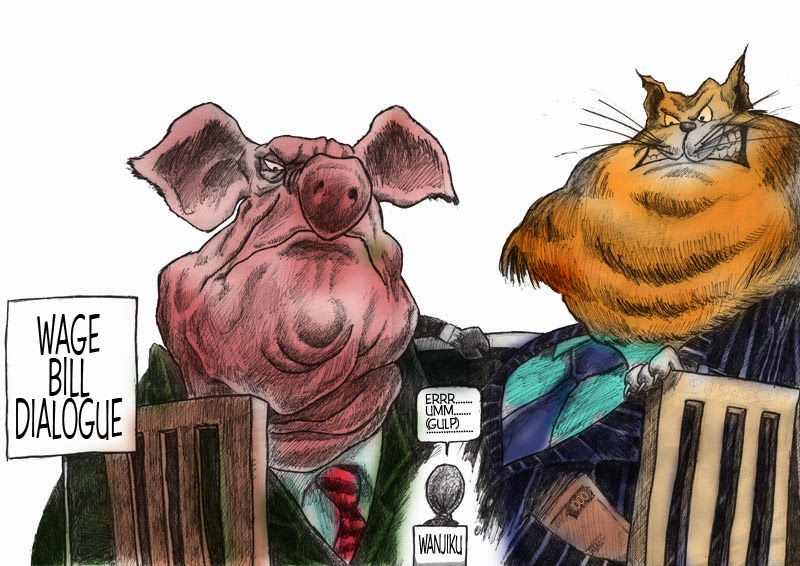 Kenyans love their monuments. A look around Nairobi's central business district will reveal a good number of them, commemorating everything from the first world war, to the fight for independence, to the KANU dictatorship and even the public transport system.

However, there is one curious and inconspicuous piece of unintentional public art that more than any other speaks to the state of Kenya today. Along Mama Ngina Street, one of the city's only two distinct walkways, stands a City Clock whose base the Nairobi County Government has seen fit to decorate with barbed wire. The message is clear. "No idling about. Keep on walking."

Thus even on one of the few streets that have supposedly been set aside for pedestrians, for the people and not the cars, we are encouraged to keep shuffling along. Not to hang about. We are constantly reminded that the city is not ours and that our presence in it is merely tolerated.

It's location, on the street named after the billionaire wife of the first President Kenyatta, a few metres away from the statue and street honouring Dedan Kimathi, whose revolution was stolen by the political elite her husband and son represent, is a wonderful metaphor for the Kenyan public space, which while pretending inclusion, is actually better characterised by the lack of it.

Take for example the ongoing debate on the wage bill. It was kicked off a few weeks ago, with a conference of bigwigs bemoaning the burden that their salaries has imposed on "Wanjiku" -the ordinary Kenyan. At this meeting, Wanjiku herself was afforded a hearing, a token appearance that was as brief as it was forgotten. In being included, she was actually being excluded. This was a debate whose terms would be defined, not by those who carry the burdens, but by those who benefit from the current state of affairs.

As it turns out, it is all  a smokescreen, a very clever piece of political judo which seeks to turn the tables on Wanjiku herself: taking advantage of the outcry against the obscene wages and allowances paid to a few public officials to manufacture a crisis and set the stage for rolling back the political order inaugurated in 2010 which mandated the decentralisation and devolution of power. It is a reminder the political elite's historic antipathy to sharing power. In the run up to Independence, as noted by Professor Daniel Branch in the introduction to his book Kenya, Between Hope and Despair, 1963-2012, the KANU delegation to Lancaster House agreed to accept a constitution it did not want on the understanding that once it had the government, it would change what it considered "a temporary document only."

Four years ago, the elite was once again forced to accept a constitution it didn't want. Now it is set to exploit the discussion on it's own wages to undo that document and reinforce the peculiarly Kenyan approach to democracy where the people are encouraged to turn out in large numbers once every five years to rubber stamp pre-determined electoral choices, and then are expected to essentially keep their opinions to themselves in the intervening periods. The illusion, if not exactly the reality, of participation.

Similar tactics were at play last week. On Thursday, President Uhuru Kenyatta delivered his annual address to a joint session of Parliament. The 46 minute speech mentioned the poor thrice: once while recognising that the expansion of VAT "may have been perceived" as hurting them, which he described "as a painful jab," and, twice when announcing "a social safety net programme ... to transfer [untold billions in] cash to the most vulnerable." Far from a jab, this was a sucker punch from a President who justifies the requisition of the resources of the poor and their concentration in the hands of the rich in the name of "funding development" while at the same time pledging fidelity to "the value of inclusion" defined as offering the poor vague promises of handouts.

(A day later, the President met with what were described representatives of the Kenyan Somali community to urge them to fight "terrorism" even as the police terrorized city districts with a significant population of ethnic Somalis, arresting hundreds, including Kenyan Somalis. Despite the harassment, isolation, demonizing and scapegoating of ethnic Somalis and Somali refugees that has been a characteristic of the Kenyatta administration's response to terror attacks, the President continued to pretend inclusion declaring "Muslims are in the center of my government.")

"Will the elite which has inherited power from the colonialists use that power to bring about the necessary social and economic changes or will they succumb to the lure of wealth, comfort and status and thereby become part of the Old Establishment," asked Mwai Kibaki in 1964. In fact, as the report of the Truth, Justice and Reconciliation Commission confirmed, and every Kenyan knew, the "Old Establishment" was never overthrown. The colonial state endured and the elites, who have always "encouraged Kenyans to think and act politically in a manner informed first and foremost by [tribe]," opted to hype ethnicity to crush demands for redistribution of resources from the centre while paying lip service to the ideal of unity.

Like that City Clock on Mama Ngina street, the wage bill debate is a monument to the deceptive methods that have been utilised by a few to retain power and privilege at the expense of the many. If the rest of us do not come together to call time on such mischief, it will not be long before we wake up to find that the clock has been turned back to a darker era.
Posted by Gathara at 2:14 PM No comments:

From Russia With Love: Lessons For Kenya From The Ukraine Crisis

This week, Kenya will mark the first anniversary of the controversial elections that brought the Jubilee government into power. To many, those elections, and the manner  in which the country's affairs have been managed since, left a bitter taste in the mouth, and were a betrayal of the 2010 constitution and the more than two-decade long fight for political and economic justice.

On the other side of the world, in the Ukraine, a thieving tyrant has just been been deposed and a mobilization for war is under way. The events happening thousands of kilometers away in a part of the world few of us know about and even fewer have actually visited, carry important consequences and lessons for us here.

A very brief outline of events: Ukraine has seen off and on political crises and revolutions for close to a decade with the main sticking point being whether it will remain in Russia's sphere of influence or move westward.The country is ethnically divided and split down the middle on the issue. The current crisis was sparked by President Viktor Yanukovich's decision to abandon a trade agreement with the EU, and seek closer ties with Moscow. This precipitated three months of demonstrations in the capital, draconian anti-protest laws, occupation of government buildings and street clashes in which over a hundred demonstrators died. At the end of it all, Yanukovich had been stripped of the Presidency and had fled to Russian, a new pro-Western government had been formed and Russian troops had invaded the province of Crimea amid talk of, and mobilization for, war.

Predictably, the West has reacted with howls of outrage at Moscow's actions, cancelled a meeting with Moscow and done little else. If it came to a fight with Russia, it is abundantly clear that the Ukraine would be on its own. There may be talk of economic sanctions, perhaps asset freezes and visa bans, but the  fact is Russia will probably escape with little more than a pat of the hand courtesy of it's nukes and the West's hypocritical "morality of the hedge-fund."

What does this mean for us? The main lesson that our elites will undoubtedly draw is one of Western hypocrisy and weakness. This will reinforce the idea that despite its rhetoric, the West is not much more than a paper tiger and, when push comes to shove, will quickly abandon hifalutin principles and allies. Above all, realpolitik rules.

It has not been a good year for Western prestige, having been forced to swallow its words on the consequences of Kenyans electing indictees of the International Criminal Court to the highest office in the land as well as having to back down on the issue of presidential impunity. A crackdown on homosexual rights across the continent is also being painted as a thumbing of the nose to the Occidentals.

On the other hand, the Easterners, particularly the Russians and the Chinese, are increasingly being seen as viable patrons, powerful, flush with cash, if not exactly moneyed populations, and who will not ask too many uncomfortable questions about the uses to which their money is actually put. Since no one really believes in communism anymore, least of all the self proclaimed communists, there's little danger of ideology intruding into relations.

For the rest of  us, a resurgence of East-West rivalry will also mean that they all once again needs allies. As was the case with the war on terrorism, countries that were on the brink of becoming irrelevant are once again becoming "strategic." That was the designation craved by elites but that meant doom for many African countries during the Cold War, that turned them into arenas of perpetual misery and conflict as unaccountable elites essentially were let loose to loot, murder and maim in the service of either side. Words like transparency and accountability and democracy were emptied of all meaning. Today's do-gooder West was not only providing safe havens for ill-gotten wealth but financing coups against legitimately elected governments, propping up genocidal dictatorships and kleptocracies.

Thus the stage is set for a return to the heady days of independence when African rulers faced few international constraints in their dealings with their populations. In Kenya, we have already seen moves towards consolidation of state power and silencing of dissent. Laws clamping down on media independence and threatening the viability of civil society organisations have already been mooted and the former actually passed. Government propaganda rules the airwaves, courts are routinely ignored and corruption and the theft of public resources are once again a way of life.

As in the 60s, we are today urged to sing the praises of our government and its leaders; to stay silent; to keep the rot hidden; that dissent is somehow unpatriotic; to forget how the dreams of "development" and social justice floundered on the rocks of sycophancy and a wilful ignorance. We are being lulled into a false sense of security.

Yet,, as we cast our eyes at Ukraine,  it is important we realize that no one will come riding to our rescue. Like them, we will ultimately be alone in the fight against the oppressions and predations of the big brother in State House. And, therefore, we need to mobilize. We need to form alliances and create platforms and forums where the dangers can be articulated to the society.

Like the Ukraine, Kenya has seen a political revolution betrayed by greedy elites. If we do not stand up to them today, if we do not insist on accountability, then their promises of "development" tomorrow will be so much ash in our mouths. We've rid ourselves of a thieving tyrant once before and we can do it again. The question we really need to ask ourselves is whether we are truly ready to play our part in demanding that Kenya is run for the benefit of all Kenyans, not just for those who can afford to steal elections.
Posted by Gathara at 6:13 PM 4 comments: