El Adde Shows How Not To Fight Al Shabaab 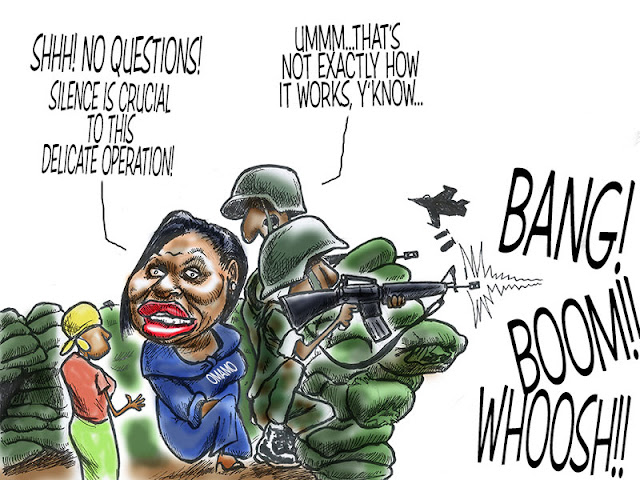 In the wake of the Al Shabaab attack on a base manned by the Kenyan contingent of the African Union Mission in Somalia (AMISOM) in the south Somalia town of El Adde, many of our returning soldiers, as well as the many who died, are being hailed as heroes. On social and mainstream media it has become de rigueur to declare love for the Kenya Defence Forces, to hail their bravery and martyrdom. Questioning the details of the incident only invites appeals to national mourning or accusations of spitting on their sacrifice.

Yet the questions must be asked. If, as seems likely, reports of tens, perhaps over a hundred killed turn out to be true, it would be the highest one-day toll both the KDF and AMISOM have suffered in their history. It would also demonstrate that reports of Al Shabaab’s imminent demise may be greatly exaggerated. The immediate as well as wider reasons for both the catastrophe and for Al Shabaab’s ability to inflict such pain must be explored if we wish to prevent similar disasters in the future.

The facts of what happened at El Adde should give us all pause for thought. Newly deployed and inexperienced troops came under attack, their camp was overrun, their commander captured and the soldiers scattered to the wind in disarray. Many died, others fled to the bush or requested shelter from local civilians, from where we are now trying to recover them. This is not how we should be fighting our wars.

Especially worrisome is the fact this attack did not come out of the blue.
The troops in El Adde had only been there for two weeks, many coming fresh from their base in Eldoret. Al Shabaab have been known to attack AMISOM positions immediately after troop rotations, knowing that AMISOM’s practice of replacing units of experienced soldiers with entirely fresh soldiers guarantees they would face inexperienced opposition.

Further, despite losing much of the territory it once controlled across Southern Somalia, the Al Qaeda-affiliated terror group has shown time and again that it remains capable of mounting devastating attacks across the country.  Of late, the group has developed an appetite for taking on AMISOM’s Forward Operating Bases.

The El Adde attack was the third such attack in the last seven months. Over 50 Burundian AMISOM soldiers were reported to have been killed when the group overran their base at Leego, 62 miles north-west of Mogadishu. Then four months ago, they sacked the Ugandan contingent’s base in Janale, again killing at least 19 soldiers, though media quoted a briefing note sent to diplomats by Western military officials claiming that around 100 soldiers were "unaccounted for" after the attack.
The tactics Al Shabaab has employed across the last two assaults are also remarkably similar to those used in the El Adde attack, both coming immediately after troop rotations and involving use of suicide car bombs and large swarms of fighters to overwhelm resistance.

Even more damning are the reports that the El Adde attack was widely anticipated and that locals had left their homes in advance of it. It is curious that little has been said about the Somali National Army troops that were co-located with the AMISOM troops. They appear to have not taken part in the fighting which probably means that they too had evacuated the area in advance of the attack. The reports indicate that this information may even have been shared with the Kenyans!

Further, the obviously poor state of relations and distrust between the Kenyan contingent and local people is another source of concern. Somalia’s fractious clan divides are a dangerous minefield that would be peacekeepers must navigate carefully. The KDF’ support for Ahmed Madobe in Kismayo has inevitably earned Kenya the suspicion, if not hostility, of clans rivalling the Ogadeni, including the Marehan who dominate El Adde.

All this is most troubling. There is a clear and massive failure of leadership which left our troops at the mercy of our enemies and that should not be swept under the carpet of a jingoistic patriotism. Once the current search and rescue operations are done, we must set up an inquiry, learn lessons and hold senior officers to account. We failed to do this following similar KDF failures at Westgate and at the Garissa University and are once again paying the price for it in blood.

The above also invites a serious debate about Kenya’s and AMISOM’s objectives in Somalia and what it will actually take to achieve them.

Kenya’s invasion of Somalia in October 2011 was in response to a spate of kidnappings for ransom by Somalia-based bandit gangs which threatened the lucrative tourist industry. Although the goals of Operation Linda Nchi were not well articulated at the time, at the very least it was meant to make the country safe for tourism. By that measure, the invasion was a spectacular failure. In the time since the invasion, attacks by Al Shabaab (which by the way had denied responsibility for the kidnappings but was targeted by the KDF anyway) on the Kenyan homeland multiplied exponentially, almost obliterating the tourism Linda Nchi was meant to save.

Today, little is heard about this. This is because Linda Nchi was hurriedly would up and the Kenya forces in Somalia rehatted as AMISOM less than a year later. They thus acquired a different set of objectives. AMISOM is a peace support mission mandated to help restore the Somalia National Security Forces, fight Al Shabaab and help extend the writ of the government in Mogadishu. It does not exist to secure Kenya.

However, it is true that a stable Somalia would be a boon for security across the region and there is no doubt Kenya would be a major beneficiary. It is important then, as a contributor to AMISOM, that Kenyans examine how that effort is doing.

On the surface, there is reason for hope. Since 2011, as noted above, Al Shabaab has been pushed out of nearly all of Somalia’s major towns including all the ports it once controlled. But while the terror group has been degraded, the authority of the Federal Government does not extend much outside the towns and Al Shabaab is still able to operate freely in much of rural south Somalia. Further, as the El Adde attack demonstrates, the Somali forces are far from ready to take on Al Shabaab.

This has critical implications for AMISOM. Its exit strategy is predicated not just on sufficiently degrading Al Shabaab, but also on training up effective Somali troops. The latter’s continued weakness is a double blow to AMISOM. Firstly, it delays the date of an eventual AMISOM exit. Secondly, one of the reasons for the UN Security Council authorising relatively low troop numbers for AMISOM was the expectation that the SNA would fill the gap. The UN Operation in Somalia II (UNOSOM II) – the second phase of the initial UN intervention, from March 1993 to March 1995 – had a similar mandate to AMISOM and had 30,000 troops. AMISOM has just over 22,000 and for much of its time Somalia has had much less.

The Mission also lacks crucial equipment and support enablers. Although belatedly authorised by the Security Council in 2012, helicopters are yet to arrive in the Mission area. Thus despite the successes it has achieved, there remain serious questions as to whether AMISOM, as currently constituted, can fully deliver on its mandate.

These and other issues should form the basis of an informed public debate on the wisdom and objectives of the KDF deployment in Somalia.  There is an opportunity today for Kenya to begin to seriously examine the options it has in Somalia and for the Kenyan public to finally have an informed say on what course to follow.
Posted by Gathara at 12:14 PM

I suspect that AMISOM is drifting into Kenya's 'Vietnam' and if the apparent mission drift is not arrested soon we could end up not achieving anything, or even leaving the situation worse than we found it.

What proof is there that the troops who were attacked were inexperienced? How do you know this was their first rotation into Somalia? From a basic understanding of deployments cycles and force rotations in a long war, as well as knowing the size of the Kenyan infantry forces, I would guess that every infantry battalion in the KDF has rotated into Somalia at least once and possibly many more times over the last four years since 'Linda Nchi' commenced. The two Kenyan guys who were ostensibly captured by HSM and interviewed on Radio Andalus were not rookies. If we are to believe what they said, Kamau has served for 7years and Balewa is 50years old hence both have considerable experience. Sorry to tear into your postulate but I think we are just running away from reality. Complacency and bad leadership was the cause of this disaster. Further, my personal view is that this war, as many other asymmetric conflicts around the world over the last two decades have shown is unwinnable. We are wasting precious resources for a very tenuous outcome. Our pride will not allow us to let go, but the cost will be very heavy in the end.


Hello, sir. I sought your indulgence over the possibility of having an online questionnaire sent to you in regard to my project study. Kindly reply. (wycliffevictor@gmail.com)

So interesting with this post
So enjoy to reading that, thanks for sharing!

that was a lesson painfully learnt by kenyans. If not, then they will never learn

Hello my loved one! I want to say that this post is awesome, nice written and include almost all important information. I would like to peer more posts like this. I’ll right away grab your rss feed as I situs togel terpercaya can’t to find your email subscription hyperlink or e-newsletter service. Do you’ve any? Kindly allow me recognise so that I may subscribe.Thanks.

thankyou for this article hopefully cools visit my website
http://www.subzerotyler.com/UserProfile/tabid/61/userId/336607/Default.aspx

Superbly written article. if only all bloggers offered the same content as you. the internet would be a far better place..
IDN Poker

This is very helpful and interested post. I am looking forward to reading more of your posts. Thanks for sharing this amazing post with us
Bonus Blog Casino
Free Blog Casino
My Blog Casino
We Blog Casino
Info Judi Terbaik