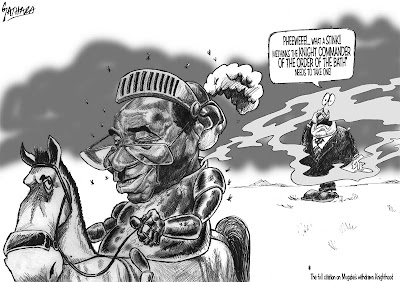 Finally, the British have done the right thing and stripped this abomination of his knighthood. Robert Mugabe has blackened the name of Africans everywhere. And finally, they are starting to speak up. Yesterday, Nelson Mandela issued an admittedly timid condemnation of the dictator and Kenya has taken the lead in calling for international intervention. The sooner we see the back of this idiot, the better.
Posted by Gathara at 4:55 PM 1 comment: 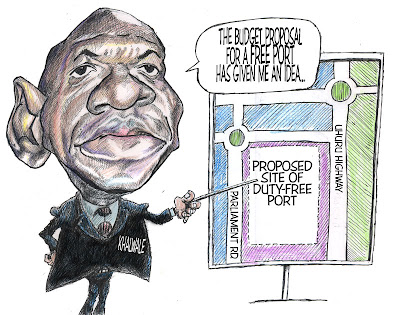 Posted by Gathara at 8:51 AM No comments:

Looking out for (Agenda Item) No.1

Whatever happened to the Serena talks? Agenda Item No. 4, which was to deal with the root causes of the post-poll violence, has yet to be finalised but you wouldn't know it looking at our politicians. It seems once they got their cabinet positions, they assumed all was well. This not only proves the hypocrisy of both the self-proclaimed "People's President" and the electoral thief currently residing in State House, it is also an indictment of the entire Kenyan society. We have chosen to behave as if the violence never happened. Never before have so many given up so much for the stupid ambitions of so few.
Posted by Gathara at 8:55 PM 1 comment: 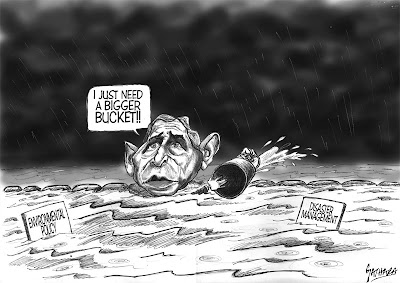 Posted by Gathara at 1:10 PM No comments: 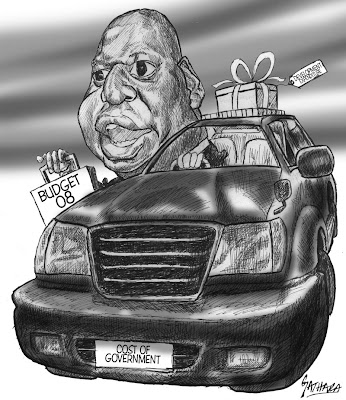 During his budget speech yesterday, wasn't it amazing to hear Finance Minister Amos Kimuya thanking the international community for intervening in the post-election crisis to save Kenya from self-destruction? After all, this is the same guy who at the time proclaimed that there was no crisis and that Koffi Annan was only here for "a cup of tea". Talk of eating crow!

Anyway, I thought there was a lot to take comfort from in the speech, primarily the introduction of taxes on MPs allowances. While not going as far as I would have liked (i.e. taxing their bloated salaries as well), it is a good first step and opens the door to further taxation in the future as the reluctant foot-thumping and embarrased laughter from the legislators illustrated. The zero-rating of VAT on bread and rice was also welcome (though the latter's price on the world market has been steadily declining) as was his resisting the temptation to up the rate of VAT.

I applaud his attempt to crack the whip on renegade stockbrokers through a ten-fold increase in the paid up capital requirement. Also welcome is his doubling of the road infrastructure budget as well as his proposal to establish a Contractor's Registration Board with powers to deregister and blacklist the so-called cowboy contractors.

There was, though, also a lot I found puzzling such as the Kshs. 210 million he set aside for a constituency-based national football competition. Who will administer this cash? The very MPs whose record on CDF is less than stellar? Also, his silence on the sky-rocketing cost of fuel was surprising considering that half the pump price consists of government levies. How he hopes to tame the runaway inflation without a reduction in these is something of a mystery.

Finally, it did not escape notice that the budget is heavy on recurrent expenditure and comparatively light on development and investment. I think the ratio is in the range of 3:1 in favour of recurrent expenditure. I think we urgently need to find a way of reducing the public sector bill (a theme totally absent from the speech) if we are ever going to achieve the goal of becoming a middle-income country by 2030.
Posted by Gathara at 9:17 AM No comments: 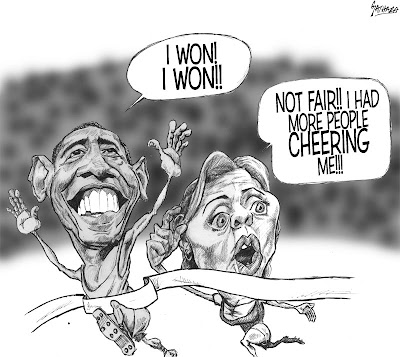 Just what does Hillary Clinton hope to achieve by refusing to concede a Barrack Obama win in the race for the US Democratic Party Presidential nomination? I heard she's been pushing the argument that she won the popular vote, perhaps in hopes of overturning her deficit in delegates. Methinks she's trying, and may very well succeed, in pulling an Al Gore circa 2000. As the latter painfully learnt, the popular vote is immaterial. Delegates rule!
Posted by Gathara at 5:37 PM No comments: 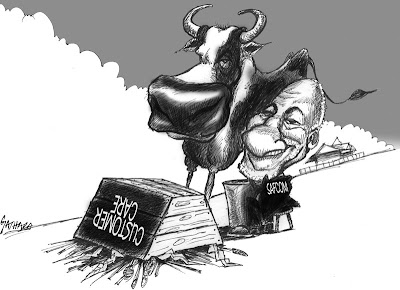 Safaricom should be able to afford better customer service...

Who is not tired of waiting over 10 minutes for someone to pick up your call at customer service? And this is on the chargeable line!

The toll free lines are a complete joke!

I think with all the profits the company is making, they should take all those young people wearing green tshirts off the streets and actually provide the services they advertise.

Ksh. 20 billion profit and they can't afford a decent customer care service? And they think we have peculiar calling habits! Since we all know that the media is in Michael Joseph's pocket, it would be interesting to see how they might react if we made such a stink on Facebook that they could on longer ignore it. So I suggest that we all join (and invite all our friends to join) this group and share their Safaricom horror stories. In this way we might just cause them enough embarrassment to effect a little change.