In Defence of the Middle Class 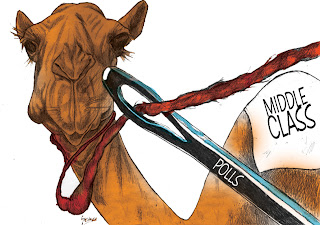 Nowadays, it has become fashionable to bash the Kenyan middle-class. We are excoriated for our perceived propensity to sit in front of computer screens whinging about electoral results that we were too lazy to try and influence by our vote. In fact, much of this is a form of self-flagellation, as very middle-class (we'll get into definitions in a minute) journalists and political analysts beat themselves up over their unwillingness to endure long queues in the hot sun at polling stations and blame themselves for the fact that the likes of Ferdinand Waititu will be running the country. “If only we had voted,” they wail while ignoring the blatantly obvious truth: it wouldn’t have made an iota of difference.

It would be first of all helpful to define who we are referring to when we say “middle class.” Last year, the African Development Bank released a report that defined the African middle class as anyone who can afford to spend $2 and $20 per day. By that measure, nearly half the Kenyan population is “middle class.” According to one account, measured by wage distribution the middle class would mathematically constitute anyone earning between Kshs 8,000 and Kshs 25,000 per month.

However, it is clear that these are not the people our political pundits are moaning about. The middle class they have in mind is totally different from the middle class that actually exists. They are probably thinking of people who have achieved earning and lifestyle levels similar to the stereotypical fictions of US sitcoms, those whom The Economist calls part of the global middle class “with an income between the average Brazilian and Italian, and whose members have as much in common with each other as with the poor in their own countries.” They probably have a tertiary education, a well-paying job that allows them a reasonable amount of discretionary income. They can afford a car or two and take their kids to private schools. They are professional urbanites, have good access to the internet and flaunt the latest hi-tech gadgets, are no strangers to international travel and can take out a mortgage.

Here’s the rub. However you cut it, this is an exceedingly small number of voters. The Economist estimates that in the developing world as a whole, they are less than 10 percent of the population. Duncan Clarke of the management advisory group Global Pacific told the BBC last year that "the actual real middle class in Africa that sits in a global middle-class income level is less than 5% - that would be about 50 million people spread in different countries across the continent, concentrated largely in some high-income countries such as South Africa and Nigeria."

So at best we are talking of 1 in 20 Kenyans. So when Caroline Mutoko bemoans the fact that many of these do not bother to vote and suggests that this is the reason politicians do not hold rallies in Kileleshwa or Karen, she fails to grasp that politicians can do math. 19 votes in Kibera or a single one in Langata? It’s a no brainer!

It is also disingenuous to claim that this class of Kenyans is indifferent to politics and hides behind social media. Democracy is about more than a queue outside a polling booth. The fulminations one reads on Facebook and Twitter do not suggest apathy. The arguments are engaged, opinionated and, sometimes, knowledgeable. Their influence is evidenced by the fact that politicians have also taken to social media. It is this middle class that conceptualized and delivered the much-lauded presidential debate. It is this class that mobilized the mass-action movement of the 90s; that through their activism and argument on the streets and in the media and, yes, on Facebook and Twitter, sets the agenda for the nation and highlights issues. They are an army of writers and journalists, activists and cartoonists, bloggers and musicians. Boniface Mwangi, Mwalimu Mati, Gado, Mutuma Mathiu, Eric Wainana, Julie Gichuru and many others, even perhaps, Caroline Mutoko herself are part of this and their contribution to our national political life is not any less valid or valuable if they choose not to cast a ballot.

By all means go out and vote. However, do so with the understanding that, given their relatively scant numbers, the greater value of our corner of the global middle class lies in their ability to articulate issues, influence the national agenda and mobilize the masses of the poor, those 90% of Kenyans whose vote is actually the one that counts. It is only by empowering that most numerous class of Kenyans to understand and appreciate the difference between a Waititu and a Jimnah Mbaru that the middle class will affect the outcome of elections. Not by standing in line.

Posted by Gathara at 1:07 PM No comments: