More Victories in War on Crime

The Daily Nation is reporting that police have tear-gassed activists protesting against the recent proposed MPs pay-hike and have arrested 5 NGO officials among them Mwalimu Mati, Cyprian Nyamwamu and Anne Njogu (Click here to download a video of the protesting thugs courtesy of Mars Group Kenya). Now, Kenyans can rest safe in the knowledge that MPs can now go about the business of fleecing the nation undisturbed by those pesky activists and their demonstrations. Little annoyances (such as the constitutional rights to free expression, liberty and peacefully to assemble to petition the government for a redress of grievances) will not be allowed to stand in the way of safe-guarding the interests of the 200 or so individuals whom we have the dubious honour of calling our leaders. Way to go Commissioner Ali!

In another imminent victory, the Government plans to effect ("within 100 days") on-the-spot fines for such heinous offenders as drivers "dropping and picking up passengers at non-designated areas, driving vehicles emitting smoke or visible vapour, driving on footpaths and . . . . not wearing seat belts." However, perpetrators of the relatively minor transgression of shoddy and late road construction simply got off with a stern warning from Roads Assistant minister Joshua Toro. No word on when the warning is expected to take effect.
Posted by Gathara at 7:31 PM No comments: 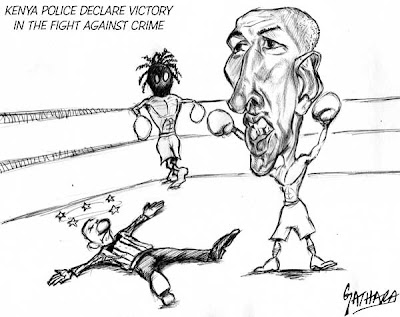 Yesterday's Daily Nation reports that barely 30 days after one of the bloodiest months in recent Kenyan history (112 dead in gang related violence and police shootings), the Commissioner of Police Major-General Hussein Ali is declaring victory in the war on crime. He is also dismissing press reports linking police to executions of suspected criminals during the month. Apparently believing that reports of the victims' deaths were highly exaggerated, the COP accused human rights agencies of "seeking media coverage in connection with claims that officers were executing a shoot-to-kill policy while pursuing Mungiki followers". If this is winning, I'd hate to see what losing looks like.
Posted by Gathara at 10:05 PM No comments:

There's A Hole in the Budget, Dear Kimunya... 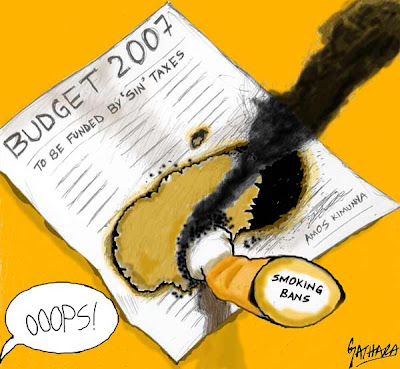 Has anyone given thought to the effect the multiple city-wide public smoking bans are having on Amos Kimunya's spending plans? Wasn't he categorical that a significant part of his recently read budget would be funded by so-called "sin" taxes on alcohol and cigarettes? His anticipated windfall may soon be going up in smoke.
Posted by Gathara at 2:43 PM 3 comments: