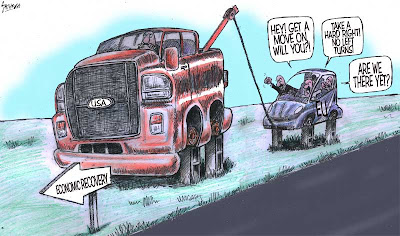 The EU has a population of close to 500 million and, taken as a single economy, is the largest in the world with a GDP of $19 trillion. It is also the largest exporter of goods, the second largest importer, and the biggest trading partner to several large countries such as India, and China. Given all that, it is surprising that it's major contribution to resolving the current global economic downturn consists chiefly of criticising US policy.
Last week Mirek Topolanek, who is running the EU presidency despite the collapse of his government in the Czech Republic, described Barack Obama's spending proposals as the "road to hell." Now, I am no lover of President Obama's pork-laden, anti-trade, nationalisation in the guise of stimulus packages and bailouts. Our own experience in Kenya amply demonstrates that the heavy hand of government rarely inspires innovation and accountability.
However, it does occur to me that the EU has fared little better in this regard and has failed to step up to the plate. It still choses to hitch its wagon to the moribund US economy instead of using its economic muscle to chart a new course, one where the rest of the world doesn't head to the ICU when the US catches a case of the sniffles.
Posted by Gathara at 4:51 PM No comments:

We Kenyans like to think that we are the most developed and sophisticated people in our corner of the planet. We consider other countries in the neighbourhood to be backwater shagsmodos. I must confess that till recently I broadly shared these sentiments. However, such smugness is sadly misplaced.
Take Malawi as an example. The last four years have witnessed an average annual economic growth rate of 7%. Over the period, the tiny landlocked country has doubled it's agricultural production every year. According to Wikipaedia,

in 2006, in response to disastrously low agricultural harvests, Malawi began a program of fertilizer subsidies that were designed to re-energize the land and boost crop production. It has been reported that this program, championed by the country's president, is radically improving Malawi's agriculture, and causing Malawi to become a net exporter of food to nearby countries.

While Kenya starves and produces a paltry 1.4 tonnes per hectare, Malawi is now producing 5 tonnes per hectare. Our production at independence was 1.2 tonnes per hectare, which goes to illustrate just how little we have improved in 45 years.
(Staying on matters agricultural, I was shocked to learn that Kenya produces nearly 1.5 times more milk than South Africa but earns 5 times less from that production. In 2006, according to the EA Report On Manufacturers & Commercial News, Kenya earned Kshs 64 billion from 3.5 billion litres of milk compared with SA's Kshs 220 billion from 2.6 billion litres which translates to revenue per litre of just Kshs 29 for Kenya and a whopping Kshs 96 for SA. With a dairy herd six times as small, the average SA dairy farmer produces ten times as much milk as his Kenyan counterpart.)
Back to Malawi. While our own fight against corruption continues to be mired in the morass that is our politics, Malawi last month re-arrested (note the re-) former president Bakili Muluzi on charges of stealing millions of dollars given to the country by international donors. And as we struggle with the aftermath of the 2008 post-election violence, it is instructive to note that Malawi has had two peaceful transfers of power.
Who's the backwater now?
Posted by Gathara at 8:51 AM 2 comments: 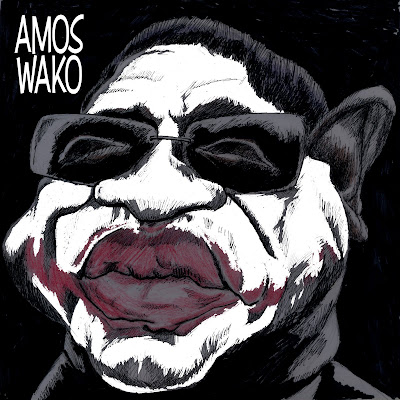 Best Supporting Actor (Corruption)
Posted by Gathara at 6:39 AM 2 comments: 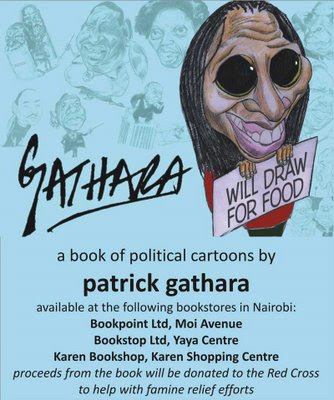 Just launched a book of my cartoons, "Gathara Will Draw For Food". It is now available at leading bookshops in Nairobi and I am working on making it available for online purchase. It retails for Kshs. 800/- and part of the proceeds will be donated to the Red Cross to help with famine relief efforts.
That is why I have not posted any new cartoons in a while but normal service will resume soon. Thanks to all my readers for your continued support.
Posted by Gathara at 8:01 AM 7 comments: