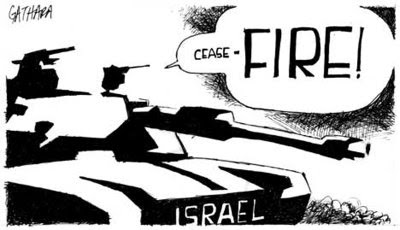 It is often said that truth is the first casualty of war. Take the reasons offered for the ongoing bombardment and invasion of Gaza by the Israeli Defence Force. The right of national self defense is the oft-repeated mantra, the reasoning being that no nation can abide continued rocket attacks on its civilian population.
To support their claim, the Israelis have been issuing figures of up to 11,000 rockets lobbed either by Hamas or with its blessing into Southern Israel from Gaza, and have accused the group of refusing to respect and renew the current ceasefire while at the same time taking advantage of the lull to replenish its weapons stocks.
Well, regarding the just ended ceasefire, a report by the Intelligence and Terrorism Information Center (ITIC) which is part of the Israel Intelligence Heritage & Commemoration Center (IICC), an NGO dedicated to the memory of the fallen of the Israeli Intelligence Community says

"As of June 19 [when the ceasefire took effect], there was a marked reduction in the extent of attacks on the western Negev population. The lull was sporadically violated by rocket and mortar shell fire, carried out by rogue terrorist organizations, in some instance in defiance of Hamas (especially by Fatah and Al-Qaeda supporters). Hamas was careful to maintain the ceasefire."

The report goes on to show that between June 19 and November 4 (when the truce was broken by an Israeli incursion into Gaza -more on that later)only 20 rockets (three of which fell inside the Gaza Strip) and 18 mortar shells (five of which fell inside the Gaza Strip) were fired at Israel. Compare this with the average of 380 rockets and mortars a month in the six months preceding the ceasefire.
In fact, the Jeruasalem Post reported that on Sunday, 21 December, less than a week before Israel launched her attack on Gaza, Shin Bet (Israel Security Agency) head Yuval Diskin told the cabinet that Hamas was interested in renewing the relative calm with Israel and wanted to improve the cease-fire conditions.

"Diskin listed Hamas' conditions as cancelling the blockade of the Gaza Strip, obtaining a commitment that Israel won't attack, and expanding the cease-fire to the West Bank."

In fact, historically it is Israel itself that has been reluctant to accede to truces and ceasefire.
Given then that Hamas was committed to maintaining the June 19 tahadiyeh (lull), how and why then did it collapse?
The ceasefire was based on unwritten understandings and there was ambiguity as to how long it would hold. According to the ITIC report quoted earlier, " Israel 's position was that the lull had no time limit. The position of Hamas and the other Palestinian terrorist organizations was that it would remain in force for six months and they then expected it to be extended to Judea and Samaria . Spokesmen of Hamas and other terrorist organizations later stated that it would end on Friday morning, December 19." However fighting broke out on the evening of November 4 when, according to the BBC, Israeli tanks and a bulldozer moved 250m into the central part of the coastal enclave, backed by military aircraft.
The Israelis claim their intention was to destroy a tunnel dug by militants to abduct its troops. In the ensuing violence, 6 Hamas fighters were killed and the group responded by lobbing over 35 rockets and mortars into southern Israel. The ITIC report shows that by December 17, a further 330 rockets and mortars had been fired from Gaza into Israel by Hamas and other Palestinian groups while Israel responded with air strikes and by "closing the [border] crossings for longer periods leading to shortages of basic goods in the Gaza Strip and disruptions in the supply of fuel." And while the ITIC report claimed that "electrical power was not cut off, since the plant in Ashqelon , which supplies 65% of the Gaza Strip's electricity, provided an uninterrupted flow of power", TimesOnline quoted UN figures showing that half of Gaza City’s residents received water only once a week for a few hours and homes were without electricity for up to 16 hours a day.
By December 18, with one day left to go in what was by then a largely fictitious ceasefire, Hamas was declaring, in the words of MP Mushir al-Masri "the truce with Israel is finished .... and there is no possibility of it being renewed." Another Hamas official, Ayman Taha, explained that the lull was dead "because the enemy did not abide by its obligations."
Explaining the group's logic, Israeli author Arthur Nelsen wrote in Haaretz:

"Breaking the siege that has crippled normal Gazan life is the central challenge facing Hamas, both because it has decimated the lives of its electoral base, and because it is a litmus test of the group's alternative policy for statehood through resistance as well as talks.
If the tahadiyeh (lull) had succeeded in opening Gaza's borders to aid, trade and free passage for Gazans - especially work-related passage - it would have been political madness for Hamas to break it. As things were, the Gaza closure pushed the organization's popular support down to 16 percent in November, according to one opinion poll, and it must have concluded it no longer had anything to gain by holding fire. "

It therefore seems clear that, contrary to Israeli government  assertions, Hamas largely abided by the tahadiyeh and would have preferred to extend and renew it even after the hostilities provoked on November 4 provided the Israeli blockade of Gaza was lifted, as Shin Bet's Diskin confirmed. It is thus the siege and the reasoning behind it, namely the toppling of Hamas and reversal of the 2006 election result, that is the real issue.
On this, there is broad agreement across the Israeli political spectrum, despite recent statements to the contrary. On December 21, the same day Diskin gave his cabinet briefing, the top candidates to become Israel's next Prime Minister, Kadima's Tzipi Livni and Likud's Benjamin Netanyahu vowed to topple Hamas in Gaza. Livni said her government's "strategic objective" would be to "topple the Hamas regime" using military, economic and diplomatic means. Netanyahu called for a more "active policy of attack", accusing the current government of being too "passive". "In the long-term, we will have to topple the Hamas regime. Ephraim Sneh, former Deputy Defense Minister and chairman of the Strong Israel Party, argued in the Washington Post on New Year's Day that Israel's strategic aim is not to stop rockets falling on Sderot, but to topple the Hamas government in Gaza. More directly, Deputy Prime Minister Haim Ramon in televised comments last week said: "The goal of the [current] operation is to topple Hamas."
But even the uprooting and destruction of Hamas would be but a step on the way to Israel's ultimate goal, an imposed peace. The idea that Palestinian quiet would be met with Israeli concessions has been effectively demolished in the West Bank. There, where no rockets or mortars are being fired and where a moderate Fatah government of Mohammud Abbas holds sway, Israel has increased its checkpoints, expanded its settlements and continued to build its illegal "separation barrier" on Palestinian land. Even the much touted pullout from Gaza was described by a senior adviser to then Prime Minister Ariel Sharon, Dov Weisglass, as "formaldehyde." It supplies the amount of formaldehyde that is necessary so that there will not be a political process with the Palestinians... this whole package that is called the Palestinian state has been removed from our agenda indefinitely."
A final word on Hamas rockets and the targetting of civilians. Arthur Nelsen writes concerning the former:

"Rocket attacks may be criminal and ineffective - as well as self-defeating in the destructive response they elicit from Israel. But they also meet a very human need to maintain both honor under fire and the spirit of resistance....As Hamas spokesman Fawzi Barhoum put it, 'Because the occupation decided to use every shade of punishment to destroy Hamas - collective punishment, deporting, arresting and killing - we need military resistance to force it to stop.'"

And the targetting of civilians is a tactic that has been adopted by both sides. In January 2008, Israeli Prime Minister Ehud Olmert said concerning those his government now claims are held hostage by Hamas: "As far as I'm concerned Gaza residents will walk, without gas for their cars, because they have a murderous, terrorist regime that doesn't let people in southern Israel live in peace." Once the principle has been established that Gazans can be punished for Hamas' rockets, it is a small leap from blockading and siege to bombing and death.
Posted by Gathara at 1:20 PM

The world is ignoring this holocaust. Only this time the visctims are muslims and Israel the creul.

Both sides have their own public supporting their actions. I think it's a shame that people have to be killed for votes, or, by votes.

great analysis...but what would you give for a solution???? particularly with religious zealots on either side who believe it is ordained that they shall fight to the very end?????
am curious to really hear this!

Anon,
I believe the outlines of an eventual comprehensive settlement of the Arab-Israeli conflict have been clear at least since 1972 with Syria's grudging acceptance of US Security Council Resolution 242 acceptance, and also formed the basis of the 2003 Arab League peace proposal which Hamas has accepted and Israel has rejected. They include a full withdrawal by Israel to 1967 borders and a just settlement of the refugee problem in return for a total peace diplomatic recognition of Israel by all 22 Arab League members. While Hamas is not prepared to go as far as a de jure recognition of Israel, it has offered a de facto recognition and an indefinite "hudna". All that remains is for Israel to live up to its obligations under 242.