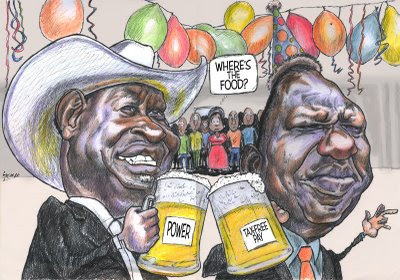 Recently the residents of Africa's largest slum, Kibera, had an opportunity to celebrate the election of Raila Odinga as their MP. But they apparently had more pressing matters on their minds. The PM's triumphal "homecoming" was marred by shouts of "Unga!" as his constituents sought to know what he and his guests (who included the Minister for Agriculture) were doing about the escalating cost of maize flour, a staple for most Kenyan families. Their welfare is, after all, supposedly one of the reasons he is enjoying his over-inflated, tax-free pay package.

The Waheshimiwas reaction to all the commotion would have been laughable if it wasn't so tragic. The Prime Minister blamed his Agriculture Minister, William Ruto, who returned the compliment by pointing out that Mr. Odinga chairs the Cabinet sub-committee on agriculture. No less than 9 Cabinet Ministers blamed something called "The Government" for the situation! They threatened "dire consequences" should the issue not be resolved post-haste with one of them (Prof. Anyang' Nyong'o, Minister for Medical Services) vowing to lead public demonstrations.

I remember a quote from Prof. Nyong'o during his days in opposition. He used to speak of people who were "incompetent to govern", referring to the Mo1 regime. It now seems very like a case of the pot calling the kettle black.
Posted by Gathara at 6:23 PM