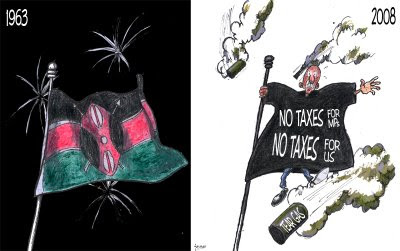 In the run up to last year's election, I argued (to vociferous protest from some of my readers) that not only was the Mwai Kibaki administration a beneficiary, and not the instigator, of democratic reform, but was (and still is) engaged in the process of rolling back our hard won freedoms. After at least four attempts to muzzle the media (and now civil society) through brute force and legislation, countless unresolved corruption scandals and a stolen election, I wonder how many still think the President is interested in democracy.
Posted by Gathara at 8:05 PM

I would extend that to the entire western world...after all Kibaki is not entirely his own man.

You only have to look at Zimbabwe, Somalia, Congo, not to mention the Iraq, Afghanistan and the Gaza strip, to see how Kenya dodged a bullet.

Its called the Kanu inheritance. None of the peep who've gone thru Kanu know the meaning of democracy

On one hand, we have successive governments whose greed is continuously pulling on the fragile seams of democracy. Now, we have a population that has recently tasted the power of sedition, overwhelming law enforcement. Smart politicians would give the people what they want, but Kibaki insists on starving democracy. I fear that the beast has had a taste of blood, and will be coming back for more.

kenyans have to now go beyond "elective democracy" to "service / substantive" democracy where checks and balances discipline the "use and service" of democracy. for as long as amos wako and kibaki are around....and for as long as rent seeking is so high in our politics we are wasting our time. its no wonder all our political "angels" fall so hard even b4 a single flight!!!