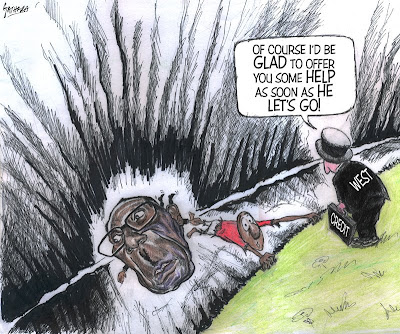 The similarities are uncanny. Two nations, both led by megalomaniacal demagogues with delusions of grandeur, both involved in costly (and ultimately failed) foreign adventures, both considered international pariahs and both subject to debilitating international sanctions. And if Prime Minister Raila Odinga has his way, Robert Mugabe's Zimbawe may soon have something else in common with Saddam Hussein's Iraq: US-style regime change this time delivered by African Union troops.
The proposal, which has received Archbishop Desmond Tutu's blessing, is unlikely to succeed on two counts. First, it is unclear whether the famously spineless AU is up to the task. Its record and that of its predecessor the Organisation of African Unity (OAU) hardly inspires confidence. The deployment of an under-resourced and undrmanned AU peacekeeping force in Darfur in 2004 did little to quell the violence there and the peacekeepers frequently became targets themselves. Even faced with Zimababwe's unpaid and unmotivated army (which resembles its DRC counterpart by the day), it is by no means certain whether the AU could muster enough troops and resources to get the job done.
Secondly, while Zimbabwe's economic problems have undoubtedly been exacerbated by the undeclared sanctions imposed upon it by the US, it is also accurate to say that it is Mugabe's myopia and greed that led to the crisis in the first place (the economy was in free-fall way before the enactment of the Zimbabwe Democracy and Economic Recovery Act in December 2001, through which "Zimbabwe’s access to finance and credit facilities was effectively incinerated"). Many of the African countries that would be contributing troops to unseat Mugabe are similarly affleicted, even though the symptoms of economic malaise have not been demonstrated in as dramatic a fashion. It is unlikely that the likes of Meles Zenawi, Yoweri Museveni and Mwai Kibaki (to name but a few) would have anything constructive to add to a discussion on restoration of democracy in Zimbabwe.
Perhaps Africa's rulers should first remove the straw from their own eyes before tackling the log in Mugabe's?
In the meantime, I think the continued denial of international finance and credit facilities to Zimbabwe is abominable. Just like the 12-year Iraqi sanction regime, it hurts the people while doing little to dislodge the regime. While I support continued international pressure to oust Mugabe or at the very least secure a transitional power-sharing agreement, inducing a full-scale collapse of the country's economy is beyond the pale.
Posted by Gathara at 3:13 AM

Nice post as always. Zimbabwe needs some very serious intervention. God must be in a dilemma too. I need to catch up on ur blog. Hope u r well though.

Unyc,
I'm doing fine. Thanks for dropping by.

if you seem to suggest no holding of aid from Bob (mugabe)...and no military intervention...what do you have in mind?

Anon,
No sanctions regime has ever dislodged any tyrant from power. All it does is impoverish the people and further weaken their ability to effect change from within.

Military intervention raises some disturbing issues. Why start with Zimbabwe? Why not Somalia which is in as bad, if not worse, situation? What about other dictators and election thieves on the continent.
Why Mugabe and not Gabon's Omar Bongo, Ethiopia's Meles Zenawi, Uganda's Yoweri Museveni, Kenya's Mwai Kibaki, Sudan's Omar Bashir?

That also creates another hurdle. Do African nations have the requisite political will (let alone military prowess, resources and technology) to successfully prosecute the war? After all, they might be next.

Are they willing to work together in this endeavour? (Remember the so-called African World War in Congo?)

What of securing the post-war order and reconstruction. Poverty-stricken African countries can hardly be expected to shoulder that.

are you suggesting that if 10 other cases deserving of intervention exist, or of double stds can be listed...that therefore legitimacy and rightness of military intervention in Zim is critically diminished? from a legal standpoint, mugabe regime can be pronounced illegal. from international doctrines eg "UN's right to protection"...legitimacy and legality and need for intervention DOES exist. i believe the right thing be done in Zimbabwe without extraneous baggage to foggy the course of action. AID is other peoples's tax money...so they can put it where they wish...and Bob has no right of recourse to AID money from other countries. The AU/SDAC must look at the statutes, international, AU & SADC...and find tons of legitimate legal reasons for military intervention. what excuse do you have for the Zim in diapers, surely awaiting death because of gava failures, yet it is the gava's responsibility under oath?????

You are actually right. sanctions have never helped the common guy. But Zimbabweans must also rise up and take charge of their own lives by changing bad leaders. its foolish to continue supporting such a tyrant and on the other side cry to the world about these issues.

Anon,
I have argued nothing of the sort. I was just pointing out the inconsistency of ignoring genocide in Rwanda, 5 million deaths in Congo and stolen elections all over the place while at the same time setting up Mugabe as a "special" case.

And if, indeed, you wish to see an invasion of Zimbabwe, I hope you are giving thought to the ability of the AU to not only do so successfully, but to police and midwife a better political and economic order. The major question would be this: If the majority of AU members are unable to do this at home, what makes you think they would manage it elsewhere?

Gathara,
sorry for the lapse in answering back! anyways, the major question that you pose is in fact wrong and misses the point. one, every of these cases in africa is indeed SPECIAL and URGENT!! two, the UN could do it; and, precedent has already been set eg in sierra leone. nothing will stop the kibakis and mugabes from making easy mockery of democracy and constitutional rule....unless at pain of an external military force - which can swiftly swing into action. the details of how...believe you me...IS NOT the constraint! when you rationalize poverty and cost as a constraint...you inadvertently expose us all to the potential million mugabes who in other places are well restrained by the fervent recognition that they DO NOT HAVE A MONOPOLY OF FORCE! by fear, u make the fundamentals and inalienable values of humankind subservient to the expediencies of kibaki and mugabe (+ yours truly most presidents at SADC and AU!!!) . Bob's army is only 32,000 strong ..for starters; and some have gumboots! (Tsk!)

Anon,
To argue that we need not be too concerned with the details of post-invasion planning is to ignore the lessons of Iraq. It would be worse than irresponsible.

I am all for getting rid of Mugabe and his fellow dictators, but we must do so intelligently.

gathara,
why state say the obvious??????? its like the Kenyan ruling gava and the the new constitution thing. they just dont want a new ONE! all these rationalizations are mere stories....as in zim case. to do things intelligently is an obvious remark that goes without saying. ama?

Anon,
It was so obvious to the Americans in 2003. Assuming that we are agreed that Comrade Bob has to go, the question becomes one of means. If you favour military action, then you must decide who is to do it. This is not "extraneous baggage". It is fundamental to the enterprise. If, for example, AU members can't foster democracy at home, why would you think them capable of imposing it abroad? Can they afford to? Do they even want to open that door?

If not the AU, then who? SADC? SA's 90s military intervention in Lesotho doesn't inspire much confidence. Similarly depressing is Jacob Zuma's statement that SA will not topple Mugabe. He is due to ascend to the presidency later this year.

The UN? Highly unlikely considering the inability to do anything in Sudan. Even the Sierra Leone operation had to be rescued by the British.

I wish the reality were different and that we truly had the courage and will to be our brothers' keepers. However, I have seen the folly of embarking on military adventures with half-baked and wooly notions of final outcomes.

gathara,
we are merely internalizing and rationalizing inability to get things done. our guys just DONT WANT TO DO IT. otherwise toppling bob would not be much of a brainer, especially if the Africans want it done. africa is merely missing out on growing up and engineering legacies that will make our children encumbered with worldly enjoyments and freedoms that others take for granted. the bold steps MUST be taken.