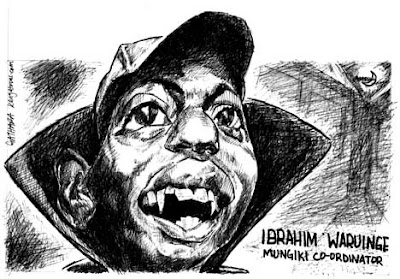 What does it say about our government when a self-confessed former leader of one of the most notoriously violent gangs, one that is responsible for the murder of tens of innocents, holds a press conference and declares that he is "capable of using full force to counter both police and ODM-Kenya"?

"I am going to stop at nothing until I make sure I express my feelings. I was peaceful until provoked and now I want to let Raila know that fire shall be returned with fire and I will make sure that I stop all the ODM rallies that will take place in Nairobi until I am given a chance to hold my rally....I told Raila to choose the plate he wants to use and from today all the sympathisers of ODM and LDP, who include police officers should know that I am capable of using similar force. This is just the beginning of a long battle."

Declaring that he no longer intends to comply with regulations requiring him to seek permits from the police for his rallies, he continues: "I will go there directly, I was testing the waters and now that I have come across provocative Raila youths soon I will show them what I am best at."

Truly, we all know what he's best at. Just ask the victims of the Kariobangi Massacre about the feelings this man wishes to express. It is a mystery to me why this guy is still a free man after the chaos and death his hoodlums have wreaked. He, along with his fellow "Men of God" Gilbert Deya and Paul Khamlesh Pattni deserve a special place in the filthiest dungeon the Kenyan justice system can come up with. However, I don't expect that President Kibaki (or anyone in his administration) will soon sprout a backbone and do the needful.

Update:
According to the Daily Nation, Ndura Waruinge has been arrested in connection with the Kibera violence in which 3 people lost their lives. No word of government intentions to prosecute him for his past crimes.
Posted by Gathara at 8:55 PM

I doubt we need any reminder that when violence replaces decent talk as the tool for political mobilization, the road to a failed state becomes very short indeed. But seems some folks still think we can toy with violence and proceed with biz as ussual.

M,
You win. It didn't even take till noon today. The bugger was free and addressing the press by 7.00 pm on Monday. Talk of impunity!

M,
I spoke too soon. Apparently he was not released as the Standard had reported. The police allowed him to address the Press while still in custody, a favour accorded to no one else. He has now been move to the Machakos Police station and from thence to an undisclosed, secure location. I'll take your money now.