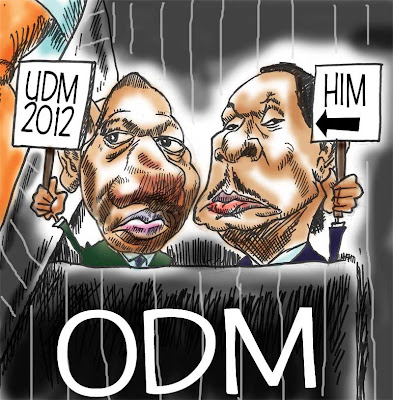 In my honest opinion, our legislators are just proving the truth of Millie Odhiambo's claim that 15 per cent of her colleagues are gay. I mean, what do you expect when MPs have the integrity of Kamiti inmates and the law happens to be ass? In fact, 15% is probably a gross underestimation.
Posted by Gathara at 8:18 PM

So who's fault is it the regstrar of political parties has no guts?

Not the Registrar. I think the law should be revisited and changed.

We need to be more serious when crafting laws as well as disciplined in enforcing them, otherwise even laws that mean good are useless

But what use are these laws? We need to work on more than just the party-hopping laws, we need to ask are political parties anything more than fiefdoms for particular politicians?

Think about it this way, if MPs are mere representatives of their constituents, what good are laws that do not allow them to change their positions as the positions of their party bosses change. Do you think Ruto and Co could freely influence events inside of ODM?

Any fair laws must address these issues (the causes of MPs' disloyalty to their parties) just as much as it addresses the need to stick to party policies as advertised at elections.

In essence your comment seems to suggest that lower order MPs may not treat parties like their personal playthings, but the first order, where the likes of the PM, VP, Martha Karua are, may do so.

Many countries do not have these regulations we insist on here. Indeed in many European democracies one can defect without losing one's seat in parliament.

Also, I really do not get the gay comments at the end of the article. They are in bad taste.

I have nowhere suggested that MPs should not be allowed to differ with their party policies. What I find unpalatable is the fact that parties, while devoid of any ideological content, still continue to be the foundations of our political order. If we are serious about this, then we must not only encourage intra-party democracy but also fidelity to a set of principles.

It is frankly ridiculous that the leader of UDM is in Parliament on the ticket of a party he has "informally" left. Many European countries do not suffer these problems (with the possible exception of Russia.)

I'm sorry that my rather crude attempt at humour bummed.