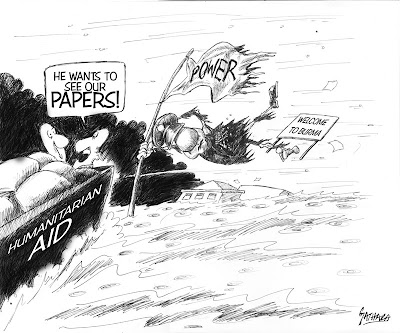 Can you believe the idiots running Burma (or Myanmar)? Possibly 100,000 people killed and over 1.5M displaced by cyclone Nargis and all the military rulers can think of is how to hang on to power! This is very reminiscent of the Kenyan situation in the first few months of this year when, confronted with over 1000 deaths and hundreds of thousands displaced, our politicians could only think of ways of exploiting the situation to their advantage. In Burma, the government actually went ahead with its sham referendum on the Constitution (which seeks to entrench the ruling junta in perpetual government and to deny Nobel Laureate Ang Sang Suu Kyi, the only person to have been validly elected to run the country, any chance of doing so) despite pleas from all concerned to postpone it in the light of the calamity. The Burmese dictators, already notorious for the scant attention they pay to the welfare of their people (having presided over the decay of the country from one of the wealthiest to the poorest in the region), are plumbing new depths of inhumanity by refusing to issue visas to humanitarian workers and seizing the few relief supplies that have been flown in. If this is not a crime against humanity, then I don't know what is. I hope the generals will soon be the subjects of an investigation and prosecution by the International Criminal Court.
Posted by Gathara at 12:03 PM