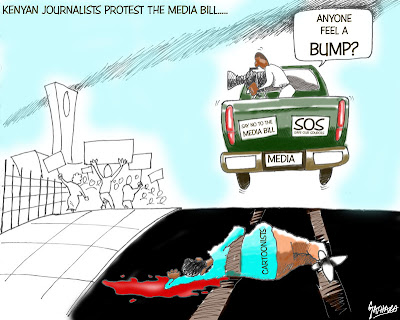 let me show my ignorance... what's the beef?

The beef is the media is largely silent about the provisions contained in the Media Bill. Information and Communications Minister Hon. Mutahi Kagwe said that when Kibaki returns the Media Bill to Parliament, the only clause that will be amended or deleted is the one on media sources. Yet there are number of clauses that are troublesome.

Parliament's Order Paper for the afternoon of Thursday 26th July contains a notice by Kagwe to move the following amendment to Clause 2 of the Media Bill:

(c) in the definition of the term "journalist" by inserting the words "holds a diploma or a degree in mass communication from a recognized institution of higher learning and is recognized as such by the Council, or any other person who was practicing as a journalist immediately before the commencement of this Act, or who holds such other qualifications as are recognized by the Council, and" immediately after the word "who" appearing in the first line:

A further amendment to Clause 5 of the Media Bill empowers the Media Council to:

(k) compile and maintain a register of journalists, media enterprises and such other related registers as it may deem fit;

The effect of the first amendment to the term "journalist" would be to deny many future cartoonists, correspondents and photojournalists legal recognition on the pretext that they do not possess the requisite academic qualifications. If this definition had been in force decades ago, the late Mohammed Amin would not be considered a journalist and neither would GADO, MADD and almost the entire gamut of Kenyan cartoonists. Many self-published individuals such as bloggers are also to be denied similar recognition. All would lose any privileges and protections extended to mainstream "journalists" under the Bill.

Read with the first, the second amendment seems to require that journalists register with the Media Council of Kenya. The effect would be to expose journalists to de-registration and consequent loss of employment based on the edict of a Council whose officials are appointed by the executive arm of government. This represents a grave conflict of interest on the part of the Media Council considering that the primary role of a free press is to be a critic of government.

The entire document is totally unacceptable. Why should the government keep a record of journalists, or choose who should become a journalist?

One clause defines a journalist as "any individual who habitually engages in journalism." That includes we bloggers and writers of Letters to the Editor . In other words, any Kenyan who publishes his/her personal opinion.

Should Kibaki sign the bill, media operators, journalists, LSK and other groupings should refuse to nominate media council members. That could be their last chance of showing seriousness of the matter.

What is going on in Mutahi's head?

We should not wonder why our nation is classified as a failed state.