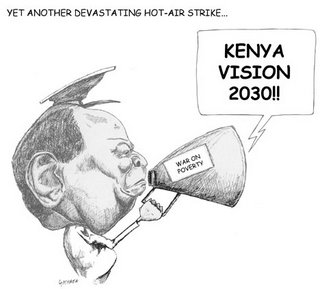 Any illusions we might have had that the Kenya Vision 2030 programme, which was launched by President Kibaki yesterday, had nothing to do with next year's elections were firmly dispelled by El Presidente himself. According to the Daily Nation:

"Although President Kibaki said he was optimistic that the development goal would be achieved, it will depend on how the country manages its affairs in the next five years."

The next five years? Could it be mere coincidence that that would cover most of a second term? Sounds very like a plug for reelection. Gone is "A Working Nation", from now till he renews his lease at State House it'll be "Kenya Vision 2030". And then I predict a deafening silence regarding implementation.
Posted by Gathara at 8:13 PM

Kibaki-Growing all sectors of the kenyan economy.
Raila -breathing on all microphones abroad and around kenya!

first term and he's acting lame duck!... more of the same, you're right.

Όstalgia do you know what a lame duck president is?Lame duck is when the president is unable to pass pro government bills in parliament or execute government plans-

as far as we have seen so far kibaki is no lame duck president -just last week narc-kenya passed through its list of east african mps despite opposition, the current budget proposed by the minister of finance for all ministries was also passed just last week including monies that the opposition was against . that my dear good sir is no lame duck presidency -dont repeat thing you hear on tv without knowing what they mean it makes you look very stupid

Amazing that we have all these lofty goals and we couldnt even achieve earlier goals like power and water for all by was it the year 2000 or something like that and the Industrialisation by 2010 or sumthin like that. This is just another clarion call that will go nowhere!

His rallying call has remained 4 years down the road after his election ? a working nation, as he amplified it recently at Uhuru Park, Nairobi during Kenyatta Day celebrations.

This year economic growth hit a record 5.8 per cent, up from 4.9 per cent last year and the highest for more than a decade. There are predictions that next year will even be better.

Last year’s performance would have been even higher had it not been for the serious draught and famine that hit the country. Thirty seven out of seventy two districts were affected, with those in the northern part being hit the worst.

There had been fears of water and power rationing since water levels had reduced so much but fortunately, the government has taken enough precaution and the effects have been largely absorbed without much economic causalities.

The economy withstood the challenge. The government’s election promise of creating more than half a million jobs per year has almost achieved. More than four hundred thousand jobs were created last year. Most of these, however, were in the informal sector.

Tourism marked the highest growth of more than 13 per cent. Enormous campaign to market Kenya in the west takes credit for this. Impact of travel ban to East Africa by USA and Britain has finally fizzled out and the sector has recovered tremendously.

Others include communication 8.3 per cent, building and construction 7.2 per cent, and agriculture and forestry 6.7 per cent .Wholesale and retail trade grew with 6.4 per cent while manufacturing hit a 5 per cent increase.

Mobile telephony and road transport was among the leading employment sector. There was also a significant growth in jua kali sector.

In education, more than 200, 000 students enrolled at schools and colleges but teacher numbers decreased by 7300 owing to resignation, sacking or retirement. There has not been sufficient replacement of teachers when they leave the profession.

Community policing, a joint police and public engagement to eradicate criminals, saw a decline in crime in the past year. The ministry of health was involved in a successful children immunization programme.

Cost of retro-viral drugs went down and free malaria drugs were availed in government hospitals. Trade with East African countries has also increased, taking more than a half of all the exports to Africa.
The government reduced borrowing from public.

This availed more cash to the people since banks could afford loans to more people. Banking and insurance got a boost from this.

The Kenya revenue authority has been very aggressive in tax collection, gathering more money than ever before.

This years government budget, is 95 per cent funded by local taxes, and the government will only need 5 per cent supplementary aid from the donors. Taxes for cigarettes have risen, following the ban of tobacco smoking.

The government prohibited smoking in all public places, including hospitals, learning institutions and public transport.

The ban has temporarily been put on hold by the High Court, following application by tobacco manufacturing companies.

They claimed there was no adequate notice given and if the law came to force they would incur huge loses. They asked to be allowed to first dispose off the stock already in their warehouses.

With the ongoing rains agriculture is bound to do far better this year. Kenya meat commission will be operational this month, with slaughter capacity of more than a thousand cattle a day.

This is certainly going to provide meat market for cattle keepers who have suffered immensely since its collapse more than fifteen years ago. Revival of Kenya Creameries Co-operative, the giant milk market, lifted the earnings and economy of dairy farmers immensely.

Prospects of finding oil in the north coastal town of lamu, and the business opportunities that Southern Sudan region provides will attract more investors in the country

Kenyans 4 Truth,
How about this set of statistics:

Washington Post Foreign Service
Sunday, February 13, 2005; Page A21:
International donors estimate that up to $1 billion has disappeared since 2002, nearly a fifth of the nation's budget for 2004. The result can be seen in everyday life. The roads are crumbling, and if they are repaired, jobless men begging for change do the work, filling potholes with dirt. Squalid hospitals are drastically under funded, with cancer patients forced to wait months for chemotherapy.

From Transparency International:
Between January 2003 and September 2004, the NARC government spent about Kshs. 878 million on cars that were mostly for the personal use of senior government officials. This substantially exceeded what the government spent over the 2003/04 financial year on controlling malaria, "the leading cause of morbidity and mortality in Kenya.

From the East African:
n an unprecedented act of generosity, the government in April gave the state-owned China National Offshore Oil Company Ltd (CNOOC) exclusive rights over a total of six out of 11 available blocks, including the hotly contested Blocks 9 and 10A in the Mandera area. So dominant has China become in the oil exploration scene in Kenya that CNOOC alone now controls 28 per cent of the total exploration acreage in Kenya.

2.From Transparency International:
Between January 2003 and September 2004,


as for From the East African:
n an unprecedented act of generosity, the government in April gave the state-owned China National Offshore Oil Company Ltd (CNOOC) exclusive rights over a total of six out of 11 available blocks, including the hotly contested Blocks 9 and 10A in the Mandera area. So dominant has China become in the oil exploration scene in Kenya that CNOOC alone now controls 28 per cent of the total exploration acreage in Kenya.-if anything this show increaded investment in kenya by foreign interests

kenyans 4 truth,
Kibaki was elected for a five year term. He is accountable to the Kenyan people for anything he does (or mostly, doesn't do) during that period.
5.8% growth in the economy is not nearly enough (Kibaki himself agrees that we need a sustained growth rate of 10% for 25 years if we're to catch up with the Asian tigers). More importantly, it is significantly less than what he promised during his 2002 campaign.

And frankly, it is ridiculous to blame the rains for this failure when his administration has stolen the equivalent of a fifth of our GDP in three years.

Now that you raise the issue of the power-hungry, according to the late Kijana Wamalwa, Kibaki had promised not to run for a second term. But it now seems he doesn't think his people have "eaten" enough and has all but declared that he will seek re-election in 2007.

Kibaki is working.
Opposition is also doing their work which is to oppose anything the Government utters or suggests- good or bad.
You, as a Kenyan, should observe, let them be, work hard and vote wisely.
These snide comments and hatin' never really helps anyone.

TI? WAshington Post? What is it with you people and the MEDIA?
Please stop taking the media as if they were Gospel Truth. Those humans just want to sell the papers and no matter what they say, no one is impartial.
Tell you what, I went upcountry the other day and asked about this whole presidency debate and stuff.
And they said, "Kibaki ameleta shule za bure, hospitals,na barabara zinajengwa. Kazi ingine tunataka ni gani?"
And I doubt you could find a reply.

Anon,
If I'm to vote wisely, on what basis do you propose that I make my decision? The government's or oppositions propaganda? I prefer to get my info from the Press and from organisations tasked with monitoring the government's performance. They may not be perfect but they are the best I've got.

As for your survey, I have two issues. Firstly I imagine the same question asked in Nyanza would generate different answers.
Secondly, as for "Kazi ingine tunataka ni gani?", how about better security for goods and persons? How about prosecuting those who pocket our hard-earned tax shillings? How about spending less on cars and MPs privileges and more on the things that really matter? How about making it easier to start a small business? How about countering the threat posed by the Islamic courts in Somalia? How about making electricity cheaper and connecting more Kenyans to the grid? How about stopping the interference in the telecoms industry tenders? how about not clamping down on Press freedoms? In fact, how about doing the job they were elected to do?

objectively the current government has achieved but its no where near kenyans aspirations, it falls short to the most fundamental factors that would maximise and trickle down the ecomonic growth to the masses. i.e. constitution, tribalism, devolution, poverty, wealth declaration, health care.
What has been achieved is economic recovery not growth.
N.B; pakistan/sudan economies have been growing at about 9% for the last 8 years, do you think this has been beneficial to the masses?
the current colonial resibliant government should be removed