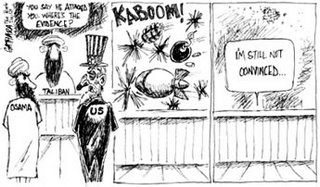 The rise of the Union of Islamic Courts in Somalia mirrors the rise of the Taliban in Afghanistan a decade earlier. Both groups emerged from the ashes of failed states and in two years established themselves as the most potent fighting forces in their respective countries. The Islamic Courts, like the Taliban before them, command great support from a populace traumatized by decades of incessant civil war and willing to accept any group that would bring an end to the fighting. Both groups espouse a radical and intolerant form of Islam and both are sympathetic to Al Qaida. The Courts' chairman, Sharif Sheikh Ahmed, considered by some to be a moderate, has sought to assure Somalis and the international community that the Islamic Courts were no threat and only wanted order. However, a leading cleric in Mogadishu, Shykh Muhamed Abdulle, was quoted as saying the Courts will “work hand in hand with Al Qaida to defeat the enemies of Islam in Somalia”. He also referred to Osama bin Laden as a “friend of the oppressed people of Greater Somalia”. Nairobi security consultant Jackson Mbuvi has described the Courts as “extremists hiding in the cloak of Islamic courts”.

Many people, fatigued by the continual chaos that is Somalia, have greeted the rise of Islamic Courts with a cautious enthusiasm. Yahoo! News, after acknowledging fears of an emerging Taliban-style regime and US accusations of harboring al-Qaida leaders responsible for the 1998 bombings, declares that the Courts “have brought a remarkable amount of control to a country that has seen little but chaos since 1991.” BBC’s Yusuf Garaad reports that despite protests from human rights bodies, Mogadishu residents were pleased to enjoy law and order. Even veteran journalist Salim Lone writing in the Daily Nation suggests that Kenya needs to “reassess our support for the transitional government of Somalia that has little domestic support” and implies that we should instead be engaging with the Courts which according to Garaard, are the most popular political force in the country.

The Taliban, though, amply demonstrated the folly of a policy of peace at any price. They were initially welcomed by many for eliminating the payments that warlords demanded from business people, reducing factional fighting and poppy production, and establishing relative stability by imposing a set of norms on a chaotic society. Many chose to ignore their extreme theology, their oppression of women and their connection to terrorism. Soon we had the August 7, 1998 “bomb blasts” and 3 years later 9/11.

Kenya, which has suffered two terrorist attacks in the last decade, seems to be oblivious of the threat posed by having such a group on its borders. Kenya needs to adopt a more aggressive policy to counter the rise of the Islamic Courts. Support for the Transitional National Government of President Abdillahi Yusuf is rightly the lynchpin of our present policy. However, two years after it was formed with the help of the UN, the government wields little authority outside the town of Baidoa. It has no military and relies on Yusuf’s personal militia. And now Prime Minister Ali Mohammed Ghedi’s crumbling and ineffectual Cabinet has been dissolved. The ship needs to be steadied. We must provide military and political support for the TNG. Ethiopia has already taken the lead in this. We should back the AU's call for a lifting of the 1992 arms embargo to allow for peacekeepers to be sent to the country and to enable the TNG form an effective national army. We must also convince Eritrea and Saudi Arabia to stop arming the Courts.

We also need to encourage talks with the more moderate elements of the Courts to work out a power-sharing arrangement and isolate the extremists. Finally, Kenya has to do more to focus international attention on this issue and to highlight the need for sorting out and rebuilding Somalia. We must emphasize that its continuing instability, and consequent poverty, is providing fertile ground for Islamic extremism and is a threat to world peace. The fact of the matter is we ignore Somalia at our peril.
Posted by Gathara at 6:20 PM

I don't think there is an instant connection with Islamic Courts and extremism.It is like saying that the rise of Courts based on Judae-christian law are behind christian fundamentalism.It isnt the courts per se that are the problem but the tolerance of the extremist element that use them as a vessel to spread extremism.Saudi Arabia and other Middle Eastern countries have islamic courts and they havent been taken over because they make an effort to deal with the extremist element there.
The fact is on the other hand that "democracy" is Afghanistan, Iraq and Somalia has given the people very little.Democracy isnt a panacea, what needs to be done is to work within these idigenous systems to make them work not scrap them and leave a vacuum!

The comparison to the taliban is wrong. For an African you seem to have latched on to the western perception of anything Islamic must be al-qaeda. Somalia is not Afganistan and the UIC is not Taliban. Somalis were fed up with the terror of the warlords and rose up. The courts are nothing but a reflection of people power and Islam is one thing that unites Somalis. Please learn more about what is happening in areas under the UIC control and compare with the recent past. Then make an informed judgement of your own. I am a Somali and I must tell you that I find it offensive when I hear this comparison.

It is not me who is making the connection to Al Qaida. It is members of the Courts themselves who say Osama is the friend of the Somalis.

The Islamic Courts in Somalia are very unlike the courts of the Western and Westernised world. First, the term "courts" is a misnomer in their case (pardon the pun). They may have started off as courts of justice but now they are a full militia in the same way that the Taliban started off as students and became fighters and governors but still retained the "student" title. Secondly, while western court systems are based on Judeo-Christian precepts, I do not think it is correct to say religion is the ultimate guide as is the case with Sharia.

I appreciate that the Courts have brought a semblance of order to the areas under their control. What concerns me is their agenda. They have stated that they want to implement their particular brand of Islamic law. This, taken in conjunction with their statements on Al Qaida, makes me very nervous. I do not mean to cause offence but I am of the firm opinion that religion is and should be an individual thing, not something the state imposes.I have no problem with those who wish to be Muslims. Just don't try to force it down my throat.

I strongly disagree with Acolyte's characterisation of Saudi Arabia. The Wahabbis of that country are at the forefront of formenting extremism and exporting it to the rest of the world. These are people who would rather let their girls die in a burning building rather than escape unveiled as happened a few years ago. The vast majority of the 9/11 suicide bombers were from Saudi Arabia as is Osama himself. This is hardly a country of moderates.

Acolyte
To quote Winston Churchill, "it has been said that democracy is the worst form of government except all the others that have been tried." The "indigenous" systems in the 3 countries you mentioned don't seem to have worked very well. Why not try a little freedom?

its a cas e of willing mbuyer willing seller. the somali people have been provided with several options in govt. the TNG of Abdulahhi Yusuf, the segmented rule by the warlords and lately the UIC. Clearly they have a made a decision of prefernce to the UIC. One has to recognize their right to determine the way they wish to be governed. If they choose the extremists, who are we to lecture them? Democracy is a funny thing. The Palestinians elected Hamas to goverment. The US and the west shuned the govt and cut their funding. Deos it mean democary isnt ok when elements not popular with us are elected. With this one incidence the west ahs lost all credibility to preach freedom and freewill

Gathinga,
As I stated in another post democracy is more than just elections. I agree that it was a mistake for the West to ignore the Hamas victory but we should not equate the election with the dawn of democracy in Palestine. It is a big step but not a sufficient one.
The people of Somalia do have right to choose their desired form of government. However, this is not an absolute right. For more than a decade they have chosen or endured anrchy and this has had repercussions here in Kenya. If now we accept that extremists who adore Osama bin Laden can be allowed to set up camp on our borders, do you think this will bring us greater security?