The Greater The Lie... 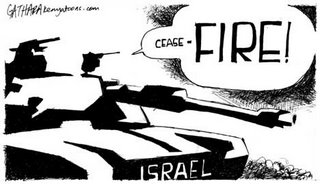 The greater the lie, the more people will believe it.
Israel maintains and perpetrates several fictions to keep the world blind to its aggressive behaviour.
As for the way forward, I think the Lebanese proposals provide a framework for a final settlement. They call for an immediate cessation of hostilities, prisoner exchange, Israeli withdrawal from the occupied Shaaba farms, an international force to police the border
with Israel, the deployment of the Lebanese army to the south and the gradual integration of Hizbollah into it.
According to CNN, Israel is open to all these save for the first. It has even stopped calling for the dissolution and disarming of Hizbollah as a precondition to a ceasefire and now admits that it cannot disarm the militants -evidence that its military campaign has failed. So why continue the bombing?
Gathara
Posted by Gathara at 2:58 PM