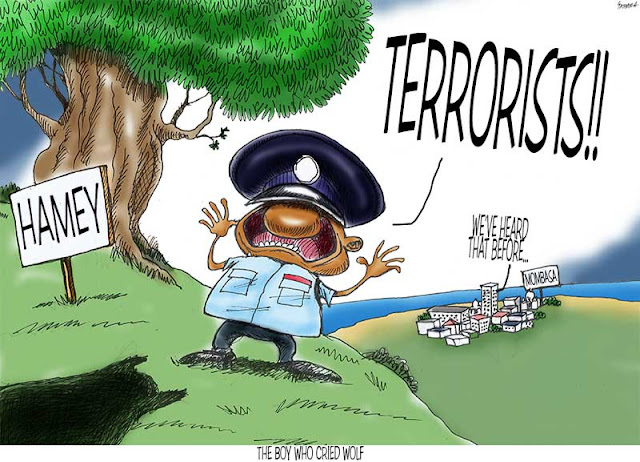 It was a strange incident by any description. According to the police, on the 15th anniversary of the 9/11 attacks in the US, three women entered the Mombasa Central police station pretending to  report a stolen mobile phone. The police say one jumped over the counter and assaulted officers with a knife before dousing herself in petrol and setting herself alight. The others, one of whom was said to have a suicide vest, threw petrol bombs. All three were shot at killed at the scene and within a few hours, three other women, all refugees from Somalia apparently staying at the house of one of the terrorists, had been arrested for links to the attack.

Nine days later, a human rights group accused the police of manufacturing the incident and murdering three innocent women. Coming on the eve of the anniversary of the attack on an upmarket mall in Nairobi in which at least 67 people died, the accusation struck a chord.

Like with the Mombasa incident, much of what exactly happened inside the Westgate Mall three years ago continues to be shrouded in mystery. An award-winning reconstruction of events by Tristan McConnell,  a foreign correspondent based in Nairobi, concluded that “far from a dramatic three-day standoff, the assault on the Mall lasted only a few hours, almost all of it taking place before Kenyan security forces even entered the building.” Much of the information issued by the authorities both during and immediately after the attack turned out to be misleading and blatantly false.

From claims of 10 to 15 attackers led by the famed “White Widow”, Samantha Lewthwaite and armed with belt-fed machine guns that had been secretly placed in the mall a few days prior, to allegations of hostages being held and subsequently freed by heroic security agencies, to the much-ridiculed accusation of the terrorists setting mattresses on fire to distract the advancing forces, much of the government tale turned out to be untrue.

When shop owners returned to find their stores empty and vandalized, and pictures of rows of empty beer bottles in the mall’s bars as well as CCTV footage of Kenya Defence Forces soldiers carrying laden plastic bags out of the Nakumatt supermarket- where most victims perished- emerged, there was little doubt that the “siege” had been a cover for massive looting by the very teams supposedly deployed to save them. A promised public inquiry into the attack never materialized and a report prepared by a joint parliamentary committee, which purported to clear the KDF of involvement in the looting, was tossed out for being “incompetent”. The rub of it is that three years later, there is still no official account of what transpired.

A similar darkness envelopes the Al Shabaab attack in January this year on an AMISOM military base manned by KDF soldiers in which an estimated 200 troops were killed. As with the Westgate incident, again much of the information the government and the KDF put out was later revealed to be false. An Al Shabaab propaganda video of the attack showed no indication of the three truck bombs, “each [with] a force equivalent to the terrorist attack on the US embassy in Nairobi in 1998” as well as “truckloads of suicide bombers” as claimed by the Chief Of Defence Forces, Gen Samson Mwathethe. Further, his promise to answer lingering questions once a Board of Inquiry had carried out a full investigation remains unfulfilled eight months later.

There is thus good reason for scepticism about official accounts of alleged terror incidents, which mostly seem geared to cover up the incompetence and culpability of senior officials and officers. The fact that the police have been unable to produce the suicide vest supposedly worn by one of the alleged attackers in Mombasa as well as the emergence of a video apparently showing two of the women being shot outside the station, even as one of them appeared to have her hands raised in surrender, give credence to such doubts.

This is not to say that there was no attack. Rather it is incumbent upon all of us to be much more critical of the overnment's offerings on terror and to demand independent and public investigation of the attacks that have occurred in the past five years. We must insist that all officials and officers found either negligent or complicit in the commission and cover up of crimes are held to account. Only by doing so, can we ensure that government learns the lessons it needs to learn in order to do a better job of keeping us all safe.