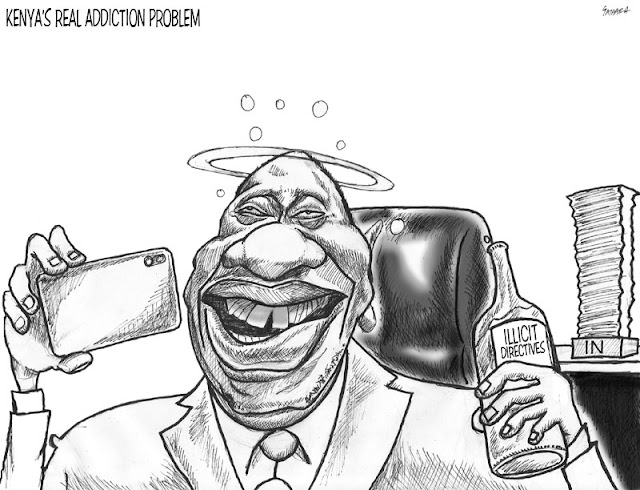 Does Kenya have an alcoholism problem? Going by media reports, one would be forgiven for believing that the country is caught in the throes of drinking crisis fuelled by the availability of cheap, illicit alcohol. Almost daily we are treated to dire warnings of an entire generation being lost to booze. The situation, particularly in the former Central Province is said to be so bad that President Uhuru Kenyatta issued directives to Members of Parliament and the citizenry “to move from door to door closing all outlets selling the illicit drinks.”

The result has been widespread destruction and looting of business premises by rampaging mobs under the guise of implementing the directive. And though the President has attempted to walk back his fierce talk by urging that property is respected, the damage has already been done. And impunity for those involved is the order of the day, with at least one MP -the infamous Moses Kuria, who else?- saying on national television that Mr Kenyatta’s directive had provided “the leeway to go out there and use our own formula,” adding  he had no regrets to make for the razing down of at least two factories in his constituency.

The dubious legality of the President’s actions aside, Kenyans appear to be preaching wine and drinking water. There is little publicly accessible data to support the idea of a widespread crisis of intoxication among the country's young men. According to the WHO’s Global Status Report on Alcohol and Health 2014 which cites data from 2010, nearly 8 in 10 Kenyans aged 15 and above had not had a drink in the previous 12 months. This figure includes the half of all similarly aged males who were lifetime abstainers and another sixth who appear to have given it up. In all, nearly seven in ten males and nine in ten females over 15 were teetotal.

In fact, Kenya would be the East Africa Community’s designated driver, given that between 40% and 45% of Tanzanians, Rwandans, Burundians and Ugandans are boozers.

Among those Kenyans who partook, only 7.4 percent had taken more than 60 grams or more of pure alcohol (roughly the equivalent of three bottles of Tusker) on at least one occasion in the previous 30 days. These figures do not show young Kenyans drinking themselves into an early grave. If anything, since the 70s, per capita alcohol consumption has actually halved.

Also in 2010, the country’s National Authority for Campaign against Alcohol and Drug Abuse conducted a study of alcohol consumption in the central region. It found that more than two-thirds of those surveyed were lifetime abstainers. The prevalence rate measured by use in the past 30 days, was higher than the national average, but not by much (about 5 percent). However, compared to 2007, the prevalence rate among men aged 15-64 had shot up by 11.5 percent. Clearly, more men had taken to drinking. However, when broken down into the several districts, the data revealed that consumption in some was much higher than in others, indicating localized problems, especially in Muranga.

Sure there are localized pockets of crapulence in the country and the folks there require help. However, it does not seem accurate to assert a generalized or nationwide epidemic of alcoholism. Neithwr is it illegal to be an alcoholic. We should not treat such people, and the legitimate enterprises that are licensed to sell booze, as if they were criminals.

Illicit brew presents an entirely different problem. It is important that we define what is illicit. It certainly does not appear that the trade in the much maligned second-generation alcohol is actually illegal. When the Kenya Bureau of Standards suspended 385 brands, it also acknowledged that they were legal, with its Managing Director saying the concern was with counterfeiters.

Undoubtedly, adulterated and bootleg hooch has caused many deaths over the years. But even here, things are not as straightforward as they seem. Chang’aa, a major target of the current crackdown. But across the country, it takes many forms and is not always illegal or dangerous. In a recent article in the Star, John Githongo avers that chang’aa brewed in a western Kenya pot is much safer and of much better quality than its central Kenya counterpart. It is also consumed much more widely consumed with little of the ill-effects. It also bears reminding that though most chang’aa is made illegally, its production and sale can be a legitimate enterprise. The 2010 Alcoholic Drinks Control Act repealed the Chang’aa Prohibition Act, which made it illegal to produce or consume traditional liquors.

The fact that all chang’a, along with the nebulous category of second generation booze, appears to be treated as if it were dangerous and illicit bespeaks both of the confusion at the heart of the current clampdown, which is compounding, not solving, the problem.

Simply put, the government must recognize that Kenya does not have a drinking problem. It has a policy and regulation problem. It is the policy regime that creates perverse incentives for the adulteration of drinks, that is killing many. This will only be cured by an enlightened, rational, evidence-based approach that prioritizes, not prohibition, but affordable, legal and safe booze for the poor. In short, the best way to deal with Kenya’s alcohol problem is for the government to sober up.
This is an abridged version of an article appearing in the August issue of The Platform magazine
Posted by Gathara at 10:45 PM

Hi, please share source of statistics. I suppose NACADA could do much more research to ensure that we have frequent statistics so that this information is a reality.

My friends and I all take Detoxicated on our nights out. It hasn’t failed us yet. I love waking up the morning after feeling great and well-rested.