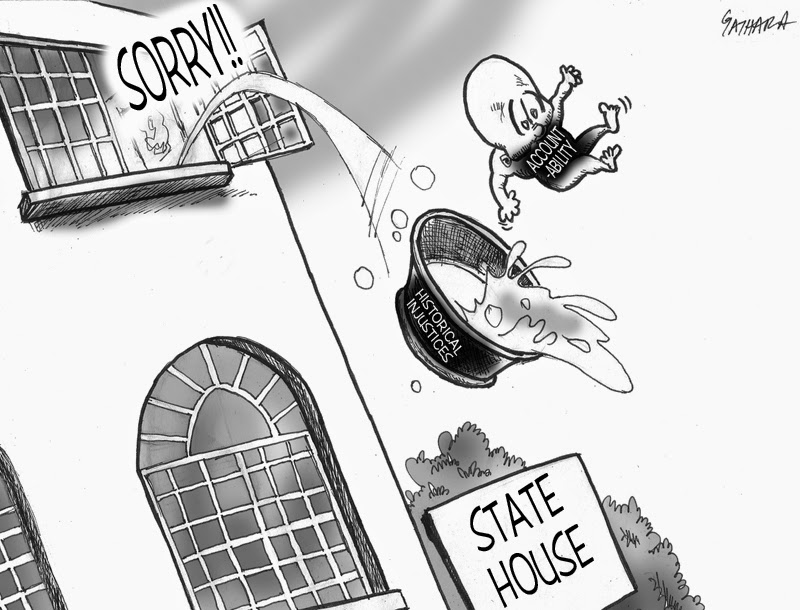 “Kenya is not a nation if we can’t properly memorialize each and every citizen we lose” writes renowned Kenyan writer, Binyavanga Wainaina. In the aftermath of the terrorist attack on Garissa University College which killed at least 148 people, there have been calls for Kenyans to name and remember those who have died, not just in this incident, but also in previous attacks and at the hands of the state.

The hashtag #147NotJustANumber has sprung up and is being widely used by Kenya’s active online community to commemorate the individual lives lost. It is a worthy and commendable effort, one that deserves the full support of all Kenyans. It is one that seeks to buck a long-standing tradition of official amnesia, especially when it comes to victims of state violence and neglect. In a very real sense, it is about ensuring that those in power are not allowed to play down or dismiss the consequences of their malfeasance.

Nearly two weeks ago, President Uhuru Kenyatta addressed a joint session of the country’s Parliament and delivered an apology for his and previous administrations’ wrongs against Kenyan over the past half century. He also announced the setting up of a Ksh 10 billion fund to compensate victims. With that, he declared he had drawn a line under a shared painful past. He repeated this statement following the Garissa attack, adding that there was a false narrative “being propagated that Kenyan Somalis and Muslims are victims of marginalisation and oppression.”

As even a cursory reading of history -or a visit to Garissa- will demonstrate, the President was being disingenuous. The Truth, Justice and Reconciliation Commission found that there had been deliberate oppression and marginalisation of populations especially in the North-Eastern region of Kenya. And while the apology and fund were recommended by the TJRC report, which today languishes in Parliament, so was the memorialisation of victims as well as the prosecution of perpetrators.

It appears that by “drawing a line under a shared painful past” the President is attempting an erasure of sorts; to present a past with neither consequence nor culpability. While asserting the presence of victims who need to be compensated and assisted, he nonetheless denies their victimisation, that their circumstances are the result of that victimisation. He refuses to see them as individuals, to acknowledge their individual pain, to name them.

He does not, for example, see Hussein Farah Wachu, a survivor of the infamous November, 1980 Bulla Karatasi Massacre in which over 3000 nameless citizens in Garissa were killled by security forces in. Mr Wachu’s wife was subsequently murdered by an off-duty policeman in 1994, an incident for which he still waits for justice two decades later. Similarly, the President has said nothing about repealing the 1970 Indemnity Act, which illegally gave retroactive blanket immunity to all government personnel for crimes committed during the Shifta war, in which the lives of up to 7000 Kenyans were snuffed out, and during which the government herded the North Eastern population into concentration camps.

The President appears to imagine that some compensation will serve as a substitute for justice. And worse, that it will remove the need to confront this history, to acknowledge the many lives ruined and to punish those responsible.

By insisting on memorialising these victims, on uttering their names, Kenyans on Twitter are refusing to be railroaded into a superficial closure that leaves wounds festering underneath. They are insisting on seeing the victims as full human beings, not just as units to be bought off with the promise of compensation. They demand that the full horror of what happened is acknowledged, not just instrumentalized by a government looking to score some PR points. And this idea goes beyond naming just those who died. The myriads today living with the consequences of our history need to be seen and acknowledged as well.

Last week’s events in Garissa need to be understood as part of a history where the residents have been primary victims, not just of terrorists taking advantage of governmental neglect, but also of security forces responding to such attacks. We cannot wish away the fact that they, like many of their counterparts across the country, still have to endure the legacy of the last 50 years and beyond. Naming them, and seeing them, is the first step towards acknowledging and finally confronting this history. It will also be the first step in the process of cleaning out the foundations of our nationhood and establishing them on firmer ground.