Whose Welfare Are Police Reforms Improving? 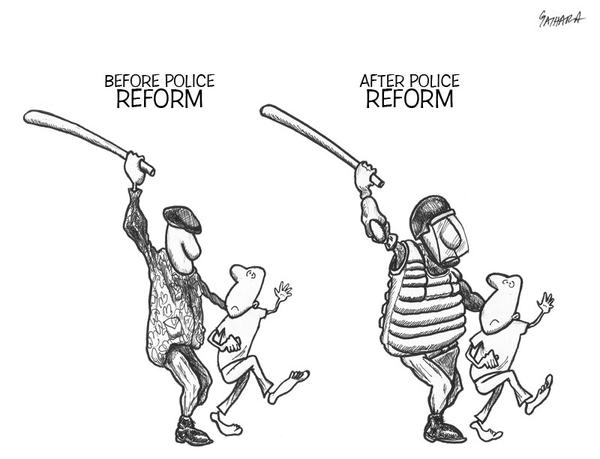 It is a routine many of us engage in everyday. We wake up, take a shower, dress, have some breakfast, shove the laptop into a bag and head off to work. We probably never imagine that this might actually land us in jail. Yet this is exactly what happened to Julio Otieno, who heads Sauti Ya Mtaa, a journalism hub based in Nairobi’s Kariobangi South. As he strolled to his office, Julio was accosted by policemen and required to produce a receipt for the laptop he was carrying. After failing to do so, he was arrested and locked up for handling suspected stolen goods. When his colleagues heard about it, they headed to the Kariobangi South Police post to try and secure his release.

They refused to pay the Kshs 5,000 cash bail demanded by the police and one of them, Willis Adika, contacted the well-known activist, Boniface Mwangi, who is also the team leader at Pawa 254, under which Sauti Ya Mtaa operates. When the police caught wind of the fact that Boniface had put out a tweet about the affair, they arrested Willis. Last Wednesday, after spending a night in jail, both were arraigned in the Makadara law courts, one charged with handling stolen property and the other with misuse of licensed telecommunications equipment.

These are far from isolated events. The Kariobangi police post is housed in a single tin shack half of which is partitioned into a holding cell. Julio and Willis were held there with 11 other men, many of whom had little idea why they had been arrested. When I visited there the night of the arrests, the police openly admitted that they were overwhelmed by crime in the area and had resorted to arbitrarily arresting any young men they came across and booking them as muggers. I would wager that much the same thing is happening in police stations across the country.

Many will remember the illegal and arbitrary detentions and deportations carried out last April primarily targeting members of the Somali community in the Eastleigh surburb of the capital. “The operation was not conducted in compliance with the law, respect for the rule of law, democracy, human rights and fundamental freedoms,” declared the Independent Policing Oversight Authority.

In July of 2013, the case of, “Liz” in Busia sparked global outrage after three men suspected of being part of a group that brutally gang raped the 16-year-old and dumped her, unconscious and battered, down a pit latrine, were ordered to cut grass outside the Tingolo Administration Police Camp as punishment. Though one has since been re-arrested and is currently on trial, it is indicative that little has been heard regarding the culpability of the police officers.

The above are just snippets of how far divorced Kenya police are from the interests of the people they are supposed to protect and the laws they are meant to uphold. The fact is, our police operate more as agents of illegal extraction of revenue than defenders of justice and order.

Yet when Kenyans speak of police reforms, it is rarely with the objective of overhauling the entire system and its raison d’etre which is little changed from the colonial days. The government in particular appears incapable of conceiving reform as going beyond providing better amenities and benefits as well as more money and equipment to police officers.

Take police housing, for example. Every so often, we are inundated by media stories of the incredibly atrocious living conditions our policemen and their families are forced to endure. Every so often, government promises to build more and better housing for them. But few ask why we are barracking police in the first place. During colonial times, it made sense for an illegitimate administration to keep its local agents separate from the community they regarded as an enemy. According to the 2009 Report of the National Task Force On Police Reforms, better known as the Ransley Report, “serving primarily as a tool of the colonialists’ right from the start, the early Kenya Police force has been described as 'a punitive citizen containment squad'”. So why does the practice continue more than half a century after independence?

The answer to that question lies in the report of the Truth, Justice and Reconciliation Commission which observed that Kenya had not fundamentally reformed the colonial state. It, and its rationale endure to today. The state is parasitic and extractive, the government focused, like its colonial counterpart, on protecting the interests of a wealthy and influential elite by subjugating those of the natives. As the Ransley Report, many of whose recommendations remain unimplemented, notes: “As Kenya moved to self-rule, it had the same police units, the same police structures and many of the same police officers in place. This made it inevitable that the culture of supporting the regime in power would be perpetuated and carried over into the new post–independence era.”

So our police don’t care about justice because they, like their colonial counterparts, were not set up to deliver it. They care about protecting the wenyenchi not the wananchi. It is why they see no contradiction in the idea of fighting crime by prosecuting a journalist for stealing his own laptop.

If we aspire towards a police service that responds to the needs of citizens, we must first dismantle the thinking which set it up in the first place. It is not simply about tinkering at the administrative edges, and the much needed improvements in officers' salaries and benefits as the government is doing, but also, more importantly, fundamentally uprooting the existing ethos of the organisation, the belief that it exists to serve the few and police the many.

Reforms should be about more than helping the police service do its job better. They should also be about changing what police officers understand that job to be. They should target the welfare, not just of policemen and policewomen, but also that of the civilians they are sworn to serve. They must seek to move the police away from the embrace of the powerful and towards that of people like Julio and Willis.

It is said that during their training, the police are indoctrinated into viewing themselves as being different from civilians (raiya) and seeing citizens as their enemies. This perpetuates the colonial philosophy of the police being used to protect the government from the people. Until the police and the rest of the people become friends and understand how useful they are to each other, there won't be true reforms.