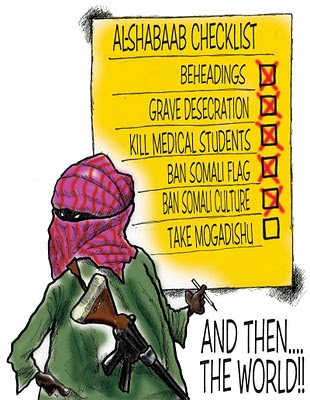 The group is opposed to the decade-long Somali peace process which produced the TFG and other transitional federal institutions. This process has the backing of the majority of Somalis and the international community, including the United Nations, the European Union and the African Union. It is in support of this process, undertaken by the Somalis themselves, that the AU deployed peacekeepers to Mogadishu in 2007.

Records of its formation are scanty, but it is widely believed that their former commander Aden Hashi Ayro played an integral part. According to a report by the Singapore-based International Centre for Political Violence and Terrorism Research, Al Shabaab was created as a youth militia of the ICU in the years leading up to 2006. Ayrow wished to wage a violent Jihad against the West and was disappointed by the limited nationalistic goals espoused by some in the ICU, especially the now President Sheikh Sharif Sheikh Ahmed of the Somali Transitional Federal Government.

According to an Al Shabaab propaganda magazine, “Shaykh Sharif, former chairman of the executive committee of the Islamic Courts… is nothing more than a Somali nationalist, pure and simple. The global jihad means nothing to him — he just wants Somalia to be a democratic Muslim state.” In fact, as the ICU sought to present a more positive international face, a tense relationship developed with Shabaab’s more radical elements. On occasion, the ICU even apologised for the group’s Taliban-like activities.

In May 2007, Ayrow was killed in a US air strike on a house in his central Somalia home town of Dusamareb. A few months later, in December, Al Shabaab named Sheikh Mukhtar Abdirahman (Abu Zubeyr), who hails from the relatively peaceful enclave of Somaliland, as its new leader.
Following the Islamists’ defeat by Somali Transitional Federal Government troops backed by Ethiopian forces, the ICU splintered, with some of the more radical elements, including Al Shabaab, regrouping at the Kenyan border to mount an insurgency. When Ethiopia withdrew its troops, Al Shabaab and their Islamist allies retook much of the former ICU territory but have been unable to topple the TFG in Mogadishu, thanks largely to African Union Peacekeepers from Uganda and Burundi.

According to a report by the Critical Threats Projects of the American Enterprises Institute, Al Shabaab, which has acted independently of the now-defunct ICU since early 2007, currently controls much of southern and central Somalia, including large portions of the capital, Mogadishu.
According to Abdisaid M. Ali, a former Cabinet secretary in the TFG, now an independent consultant, Al Shabaab does not have a written or declared programme apart from creating and imposing strictly Islamic Wahhabi doctrine in Somalia, and eventually spreading it to the rest of the African continent. It refers to the territory that it governs as the “Islamic Provinces,” which is one step short of declaring an Islamic state or a Caliphate. In an April 2008 announcement, the group itself declared that “the concept of jihad... does not recognise fanciful boundaries or so-called international legitimacy.”

Like many Islamist movements across the globe, Al Shabaab seeks to sustain jihad by continuously expanding its local community infrastructure and support. It has filled a vacuum in the country by providing the population with essential services and welfare — clearing of roadblocks, repairing roads, organising markets, and re-establishing order and a justice system through the use of Sharia courts — similar to the way the Islamic Courts acted in 2006.

However, these limited gains to the populace are more than offset by the group’s ruthless and uncompromising application of its particularly harsh version of Sharia. In October 2008, in the southern port city of Kismayo, the group condemned 13-year-old Aisha Ibrahim Duhulow to death by stoning for the crime of adultery after she was gang-raped by three men. None of men she accused of rape were arrested.

Since capturing large swathes of southern Somalia, the radical Islamists have been undertaking a programme of destroying mosques and the graves of revered religious leaders from the Sufi branch of Islam, to which most Somalis belong. They have also banned the playing of music on radio and the hiring of women by broadcasting stations.

Prior to the attacks in Kampala, the group banned the playing of football and screening of soccer matches in the areas it controls in Somalia, describing the sport as ''a satanic act'' that corrupts Muslims. In 2006, two people, including a young girl, were killed in Mogadishu when Shabaab gunmen fired their weapons directly into a crowd of demonstrators protesting their attempts to forcibly shut down a cinema theatre screening a World Cup semi-final.

Al Shabaab has loosely co-ordinated levels of leadership that revolve around local villages and religious leaders who rely on radical scholars for interpretations of the meaning of the jihad and the Koran as well as guidance in the armed conflict against the Transitional Federal Government and the African Union peacekeeping troops in Mogadishu. In the past, they used to be in conflict with traditional religious leaders but the radicals seem to have overpowered them through intimidation and assassination.

Though the group is nominally led by Sheikh Mukhtar Abdirahman (Abu Zubeyr), experts say a core group of senior leaders guide its actions. According to a situation report titled Somalia: Understanding Al Shabaab written by Paula Cristina Roque for the Institute for Security Studies, Zubeyr is assisted by a 10-member council, or Shura. In accordance with the general structure of jihadist organisations, this consultative council is comprised of sub-emirs in charge of different areas — military, theology, political information and external relations.

The militia is divided into three geographical units: Bay and Bokool regions, led by Mukhtar Roobow "Abu Mansur," the group's former spokesman; south-central Somalia and Mogadishu; and Puntland and Somaliland. A fourth unit, which controls the Juba Valley, is led by Hassan Abdillahi Hersi "Turki," who is not considered to be a member of Al Shabaab, but is closely aligned with it. These regional units "appear to operate independently of one another, and there is often evidence of friction between them," says a December 2008 UN Monitoring Group report.

Roque writes: “The Shura council and operational autonomy of different cells allows each commander to pursue his own military strategy and administer the areas conquered independently, but this decentralisation also makes the group difficult to monitor and oppose, as the removal of the top leadership would not render the organisation inoperative.”
To further complicate matters, the organisation also has two branches, or sub-units, the military branch Jaysh Al-Usra (the army of hardship), and the branch that maintains law and order, Jaysh Al-Hesbah (the army of morality).

Much of the Shabaab leadership hails from Somaliland and Puntland. While rank and file fighters are recruited from inside and outside Somalia, many come from the southern regions of Kismayo and Baidowa. According to Abdisaid Ali, Shabaab members tend to be men aged between 20 and 30 years, mostly uneducated. There however have been reports of boys as young as 14. After a review of all publicly available ranges, the International Centre for Political Violence and Terrorism Research estimates Al Shabaab's strength at approximately 4,000 individuals. The Economist magazine believes 3000 may be closer to the mark. However, as Stephanie Hanson notes in a report for the Council on Foreign Relations, “The number of rank-and-file members is less important than the number of hardcore ideological believers.”

According to Andre le Sage, a senior research fellow for Africa in the Institute for National Strategic Studies at the National Defence University of the US, the most hardline and ideologically motivated Al Shabab militias remain those run by Abu Zubeyr and Fu’ad Shongole (originally from Puntland but holds Swedish citizenship) around Mogadishu, and Ibrahim Haji Jama “al-Afghani” around Kismayo. These individuals are seen as the primary leaders of Al Shabaab’s foreign fighters, the strategists driving Shabaab’s support for global jihadi agendas rather than a narrower focus on controlling Somalia, and those with the deepest ties to Al Qaida.

UN Security Council documents estimate the number of dedicated foreign fighters at about 300, mainly from Afghanistan, Eritrea, Pakistan and Yemen. According to the New York Daily News, scores of U.S.-born Somali-Americans have flocked to their ancestral homeland to take up arms with the group. The several hundred Kenyan fighters are not considered particularly dedicated and frequently defect owing to the strict rules against smoking, alcohol, chewing khat and having extra-marital relation with women.

Abdisaid Ali fingers Saudi Arabia and other Gulf states as significant sources of external funds flowing to Al Shabaab and other radical Islamist movements in the Horn of Africa through Dubai. He however believes that terror financing in East Africa “is mainly a ‘local loop’, community based grass-roots support structure that help these elements to prevail… Local mosques, local religious leaders, and local community networks provide the bulk of long term financial support for logistical and operational needs.” Other analysts have disputed this, saying Al Shabaab thrives on taxes imposed on the local population, and especially the trade in charcoal and khat. This may partly account for the group’s about-face on the banning of chewing khat in areas it controls.

Man, this a great brief on this maddness...