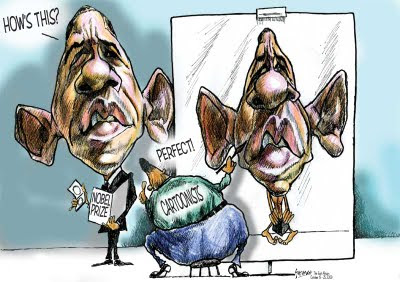 Knife-edged and salient, there is no simpler or more effective form of journalism than the editorial or political cartoon. The message – usually critical – is instantaneous, and often funny. For over half a millenium cartoonists have exposed abuses of power, the corruption of government and the hypocrisy of society. Their works provide a running commentary on events, people, attitudes and preoccupations, and reflect momentary shifts in public sentiment.

But even earlier than that, in fact from the very dawn of his existence, man was using images to tell his story. The rocks of Africa, for example, are host to millions of images, some of which date back to 10,000 B.C. What makes the connection between these and later cartooning is occasional similarity between the way people are caricatured on the rocks and some of the cartoons that appear, for instance, in the Karonga Kronikal, a humour magazine created for and by troops fighting in the East African campaign during World War 1.

The word “cartoon” is drawn (no pun intended) from cartone, the Italian word for “pasteboard.” The Italian masters used pasteboard for rough sketches (cartoni), which were especially useful in preparing frescoes and tapestries. The word did not come to mean “an amusing sketch” until the 1840s when Prince Albert, who wanted to decorate the walls of the new Houses of Parliament in London with frescoes, opened a competition for their design. The cartoons for the frescoes, some of them absurd in their attempts to appear heroic, were exhibited in 1843 and parodied shortly thereafter in the English magazine Punch, thus earning the word its present meaning.

Political cartoons are for the most part composed of two elements: caricature, which parodies the individual, and allusion, which creates the situation or context into which the individual is placed. While caricature originated around the Mediterranean, with Leonardo da Vinci’s artistic explorations of “the ideal type of deformity” which he used to better understand the concept of ideal beauty, cartoons of a more editorial nature developed further north. During the Protestant Reformation, Martin Luther condensed his message into simple broadsheet posters or illustrated pamphlets which were the distributed throughout population centres. It proved to be an effective strategy because the images would reach a large amount of people and, in an age of widespread illiteracy, enjoy the greatest possible amount of comprehension. As Barry Burden, assistant professor of government at Harvard University, puts it, “Satire was once the way for illiterate people to make sense of what was going on in politics.”

According to Ray Morris of York University, cartooning depends on the political system. In totalitarian regimes the artist is forced to praise the system and denounce its enemies. In authoritarian regimes some dissent is allowed, and when the regimes become brittle cartoonists mercilessly expose their rigid foolishness. In a Western (style) democracy during peace-time, cartoonists are watchdogs, keeping power-holders honest and accountable. “One might then generalize that cartoonists focus on office-holders and aspirants whom the public can hope to defeat in an election or a popular uprising. Cartoons focus overwhelmingly on the leaders of the party in power. Other government and business figures are in the minority.”

Cynthia Bailey Lee states in ‘A Semiotic Analysis of Political Cartoons’, a study of the visual images of presidential candidates portrayed in the editorial cartoons in the 2000 US presidential election campaign, “political cartoons are...successful in helping society to understand and make judgments about the extremely complex interactions at work in political systems.”

Over the years, the power of cartoons has been illustrated time and again. As Western culture diversified from its original religious foundation, new subjects became available for ridicule and the appeal and influence of cartoons on public life grew in proportion. In 1764, a series of four copperplate images inflamed tempers during the 1764 elections and ultimately cost Benjamin Franklin his seat in the Pennsylvania Assembly, the only election he was ever to lose. In 18th Century Europe, the cartoonists of England, Russia, Germany, Spain, and the United States generally declared satirical war on Napoleon, and so effective were they that Napoleon sent notes to the government of England requesting their suppression, equating them with murderers.

By the mid-19th century, editorial cartoons had become regular features in American newspapers. The continuing effect of political cartoons on public opinion was amply demonstrated with the demise of William Tweed, a New York politician in the 1870s, largely caused by the attention paid to him by cartoonist Thomas Nast. Tweed’s exasperated response speaks to the power of Nast’s cartoons. He demanded of his henchmen,“Stop them damned pictures. I don’t care what the papers write about me. My constituents can’t read. But, damn it, they can see pictures!”

In the tumultuous first half of the 20th Century, cartoons continued to be used to motivate soldiers and the citizenry. Cartoons in the Karonga Kronikal helped define the enemy, by depicting German soldiers comically, such as in positions impersonating African women or as cowards hiding behind African men. According to Melvin E. Page, in an article titled “With Jannie in the Jungle: European Humour in an East African Campaign” published in The International Journal of African Historical Studies in 1981, “the enemy in Europe was frequently painted in horrific terms, a Teutonic barbarian cruelly smashing the innocent and righteous.” By the WW2, the influence of cartoons was such that Hitler and Stalin surrounded themselves with large groups of “pocket” cartoonists who praised them extravagantly. They also destroyed or exiled cartoonists critical of them. During the “Battle for Britain” Englishman David Low, considered the century’s greatest cartoonist, was put on Hitler’s “death list.”

In modern times, political cartoonists, especially in the West, have fallen on hard times. Newspapers across the US, for example, are under pressure as readership declines along with advertising revenue, while more and more Americans get their information online. The dramatic decline in advertising dollars in a brutal economy has forced newspapers to cut costs by firing cartoonists, and turning to marketing syndicates for cheap cartoons. As a result, over the past three decades, the number of editorial cartoonists working in America's newsrooms has been cut in half. Prominent newspapers, such as the Wall Street Journal and the New York Times do not employ a staff cartoonist.

In East Africa, the situation is reversed. The number of working cartoonists in Kenya, for example, has more than doubled in a decade and newspapers are increasing in number, not decreasing. However this may be short lived as internet use spreads. Many cartoonists are paradoxically turning to the web for salvation. The opportunity to reach a wider audience and practice their art unfettered by the fears and inclinations of editors might yet prove to be a blessing.

However if the tradition of irreverent political cartooning was to disappear, the world would be the poorer for it. Editorial cartoonists are valuable to democracy because, as Pulitzer-Prize winning cartoonist Clay Bennet puts it, “democracy needs hecklers.”

“Let's face it, most people are just plain nice… reluctant to impose their comments or observations on others when those views are either unkind or unsolicited. Most folks will sit quietly in a theater (no matter how bad the performance) and clap politely… But in every audience there's a heckler—someone who's either fearless or foolhardy enough to publicly ridicule the flaws in a performance… Columnists and editorial writers are more like theater critics —studiously observing, then methodically reviewing the show with deserving praise or criticism. Editorial cartoonists, however, would be the hecklers—blurting out their complaints for all to hear, receiving scorn from some and approving nods from others in the audience. Although the critic and heckler basically serve the same purpose, the latter is much less concerned with the prospect of embarrassing others... or himself.”

Another famous cartoonist, the late Herb Block, who coined the term “Mc-Carthyism” and attacked the infamous anti-communist investigations of that era notes in his essay, “The Cartoon”: “Cartooning is an irreverent form of expression...If the prime role of a free press is to serve as critic of government, cartooning is often the cutting edge of that criticism.”
Posted by Gathara at 8:38 AM