Not On His Watch? 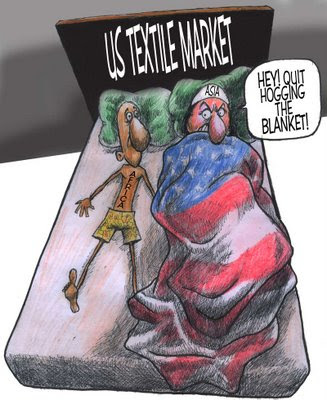 This from Rosa Whitaker, former Assistant US Trade Representative to Africa, serving under Presidents Bill Clinton and George W. Bush and now President and CEO of The Whitaker Group (TWG), a Washington, DC-based consultancy specializing in trade and investment in Africa. As the trade advisor to Congressman Charles Rangel, she was a prime architect of the African Growth and Opportunity Act (AGOA) and continues to play a lead role in advocating for its enhancement and continued relevance. (Hat Tip: The East African)

As the Obama Administration develops its Africa and trade policies, it is critical that it resists pressure from some special interests and members of Congress to support legislation that extends the duty-free access to the US market enjoyed by African nations under the African Growth and Opportunity Act (AGOA) to all Least Developed Countries (LDCs).
While the sentiment is commendable, the result of such a broad-brush trade policy would be disastrous for Africa, particularly those countries that have used AGOA to grow their apparel and textile industries and, in so doing, created more than 300,000 jobs across the continent. In 2008, apparel constituted Kenya’s top export sector to the United States, accounting for $247 million in export earnings.
Last year, the 48 countries of sub-Saharan Africa represented only 1.2% of the $95 billion US apparel import market. Bangladesh alone captured 3.8% – more than triple the trade of AGOA’s African beneficiary countries combined - and Cambodia accounted for 2.5% of the US apparel market, exporting over twice as much as African exports.
Yes, Bangladesh and Cambodia both suffer the scourge of poverty, but the difference is one of economic trajectory and divergence. Africa continues to be the only region of the world getting poorer and not converging with developed economies. AGOA offers hope and has demonstrated progress in reversing these trends. Apparel has been the entry point into manufacturing for all countries including the US and China. To cut Africa off as it is entering this labor-intensive sector is homicidal for the region.
Extending AGOA benefits to other LDCs, like Bangladesh and Cambodia, would almost certainly be the death knell for Africa’s very promising, but still nascent, apparel sector. Already, the continent’s clothing exporters, faced with the global recession as well as super-competitive, low wage producers in Asia, are under severe stress.
Last year, apparel exports from Africa to the US dropped by over 10%, a decline over three times greater than the contraction in the overall US textile and apparel market. When you consider countries like Bangladesh, whose apparel and textile exports in 2008 grew by 11% to about $3.5 billion; or Cambodia, which exported over $2 billion in apparel and textiles to the US, it is easy to understand the necessity of maintaining AGOA’s special benefits for African countries.
As Paul Collier points out in his "Bottom Billion" book, Bangladesh and Cambodia have created hypercompetitive garment industries and trade preferences are clearly not needed for the "hypercompetitive" but for the most vulnerable and fragile. If one believes trade policies should have a developmental impact, as I do, then trade preferences have to be targeted.
When Asia broke into these markets it did not have to compete with established low-cost producers, because it was the first on the block," Collier writes. "For [Africa] to break into these markets they need temporary protection from Asia."
With a new Administration and a new Congress in Washington, it is a good time to open up the discussion of how the US can develop a trade policy that serves our both economic and development objectives. It is critical that we don't succumb to superficial, feel-good policies that could have devastating consequences for the very people we mean to help.
AGOA was enacted by President Bill Clinton and enhanced three times under President Bush with consistently strong bi-partisan support. This key pillar of US policy towards Africa—which was endorsed by all 48 sub-Saharan African countries and the Africa Union must not be diluted or destroyed under the Administration of America's first African-American President.
I have always believed in and worked for more certainty and clarity in our trade preferences programs. Certainly there is room for improvement in our trade relationship with all LDCs, but as Washington's retail interests try to dilute AGOA's apparel benefits under the banner of lifting all of the world's poor to prosperity – and in the process sacrificing 300,000 African workers and their families – I hope that President Obama will simply reply: "Not on my watch."

An American adviser to the NRM government on trade and investment has lost a preliminary appeal in a U.S. court to dismiss a fraud case filed against her by her Ugandan housemaid.

Ms Zirintusa alleges in court papers that Ms Whitaker entered into a three-year oral employment contract with her promising four times the wage she earned in Uganda, full tuition at an American college, food, and shelter.

It is further alleged that Ms Whitaker promised Ms Zirintusa to make separate payments to support her family in Uganda.

In the pleadings, a copy of which Daily Monitor has obtained, Ms Zirintusa further says that Ms Whitaker violated various provisions of the US Fair Labour Standards Act, D.C. Payment and Collection of Wages Law, and D.C. Minimum Wage Act by failing to pay her the minimum wage and overtime fee to which she was entitled for the domestic services she provided Ms Whitaker and her friend Ms Pauline Harris.

Ms Whitaker worked as the assistant U.S. trade representative for Africa under President Bill Clinton, and during the early years of Mr George W. Bush's presidency.

In that job, she "developed and implemented the African Growth and Opportunity Act and other bilateral and multilateral trade policy initiatives towards Africa".

The Whitaker Group officials were recently in Uganda pushing for increased production of organic cotton to make apparel for the American market.

In her defence, Ms Whitaker argues that Ms Zirintusa could not sustain her claims because she was not legally permitted to work in the United States.

She also argues that her accuser is not entitled to overtime pay under either federal or Washington D.C. law because Ms Zirintusa lived in her employer's home - in this case Ms Whitaker's home.

Ms Whitaker bases her defence in part on the Immigration Reform and Control Act (IRCA) which makes it illegal for aliens to sue for breach of contract. In its ruling, however, the judge allowed Ms Zirintusa to proceed with the suit.

The court stated that nothing in IRCA prohibits undocumented workers from asserting their labour rights under the US Fair Labor Standards Act.

The court also ruled that Ms Whitaker acted fraudulently when she "made material misstatements of fact" in January 2003, September 2003, and July 2004.

The court found that Ms Whitaker falsely promised Ms Zirintusa that if she accepted her offer of employment, the American lobbyist would provide payments for the care and support of the accuser's family in Uganda.

According to the court's ruling, Ms Whitaker made these representations knowing they were false and Ms Zirintusa reasonably relied on the misstatements to sell her possessions at a significant loss and leave her family in Uganda to work for Ms Whitaker in the United States.

"The Court finds that these facts are sufficient to overcome a motion for judgment on the pleadings," reads part of the January 3, 2007 ruling.

Ms Zirintusa, who once worked as a catering officer at State House Nakasero, arrived in the United States on August 18, 2004 on a student visa.

On the issue of unjust enrichment, the court held that Ms Zirintusa proved that Ms Harris had received a benefit at Ms Zirintusa's expense by accepting domestic services without paying for those services.

Ms Zirintusa, who still lives in the United States, is now demanding full compensation for the value of the services rendered.

The court is yet to set a date to hear the Ugandan's compensation claims against Ms Whitaker. Efforts to reach both women for further comment were unsuccessful.

President Museveni's press secretary said he was not aware of the case. "If it is true that there was an employment agreement," Mr Tamale Mirundi said, "then that lady has a right to sue."