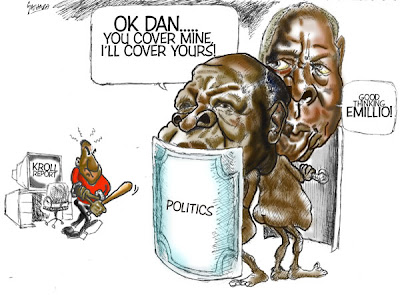 The leaking of the Kroll report has just highlighted many of the reasons why we remain in the doldrums. First, the government which has long maintained that it is doing all it can to trace our looted wealth has been shown to be less than diligent. Having sat on the report for 3 years, ignored offers of help from the UK government and actually abetted in the theft of our Safaricom shares through its silence on the ownership of the shadowy Mobitelea Ventures Ltd, all the Kibaki administration could do was engage in elaborate ass-covering manoeuvres. The government's dismissal of a report it itself commissioned is proof that there is no appetite for punishing past wrongs.

The opposition fares no better in this regard. I am amazed by the silence of those who are tasked with the function of oversight. Where are the calls for impeachment, resignations and prosecutions? Where are the votes of no confidence? (And wasn't that Chrysanthus Okemo I spotted at the ODM delegates conference? He is named in the report as one of the shareholders in "a business in the name of the Government of Kenya" along with Moi, Saitoti and Biwott.)

Finally our press seems more interested in using their freedom (won at our expense) to indulge the political class. It is surely inconceivable that none of our investigative journalists was aware of the existence of this report. That we had to wait 3 years for an anonymous leak on the internet is an indictment of the laxity with which the Kenyan media approaches its function of keeping the citizenry informed. It is illustrative too that over the weekend, more space and resources were devoted to covering the ODM convention than on discussing the implications of a government abdicating its responsibility to its citizens and choosing to side with the enemy.

It is at times like this that I truly feel ashamed to be called a Kenyan.
Posted by Gathara at 9:27 PM

[B][U]Kenyan MPs have passed a law which may make it impossible to prosecute corrupt politicians implicated in big scandals.[/U][/B]

The law limits Kenya's Anti-Corruption Commission to investigate alleged crimes committed only after 2003.Two notorious cases predate this - the Goldenberg and Anglo Leasing scams when huge sums were diverted from the Kenyan exchequer into officials' back pocketsPresident Mwai Kibaki won polls in 2002 on an anti-graft platform he has yet to fulfil. He faces re-election this year. Observers say the move may have been timed to ensure no politicians face damaging legal proceedings ahead of the polls.

[B][COLOR="Red"]After a heated debate, opposition MPs surprised the government by winning a vote on the controversial amendment, which deletes key sections of the 2003 Anti-Corruption and Economic Crimes Act.Justice Minister Martha Karua argued against the change, saying the sections were the core of the Act and their deletion would strip the KACC of powers essential to carrying out its remit.Speaking in parliament she said: "Past economic crimes have not been successfully investigated and this amendment would give the KACC a deadly blow."[/COLOR][/B]

The head of the Kenya National Human Rights Commission, Maina Kiai, has described the law as an affront to the people of Kenya.

"The politicians are spitting in our faces," he said.

Mrs Karua told parliament that the architect of the amendment, Paul Muite had an interest in sabotaging the KACC investigation.

"Hon Muite's interest is obvious and this amendment is mischievous", she said.

Back in 2003 when the KACC was set up, Mr Muite told Kenya's Daily Nation he was looking forward to "defending himself against allegations that he received 20 million Kenyan shillings" from a businessman implicated in the Goldenberg scandal.

It is alleged that a company called Goldenberg International colluded with government officials to make a claim for a 35% compensation for the export of minerals, in spite of Kenya having no diamond reserves and producing little gold of its own.

At least $80m was paid in export compensation, but some estimates suggest that Kenya's overall losses amounted to around $600m - the equivalent of more than 10% of the country's annual GDP.

Then under President Kibaki, officials sought to order a replacement for Kenya's passport printing system.

Without a proper competitive tender, the contract was instead awarded for five times the price to a company registered in the UK, the Anglo-Leasing and Finance Company Limited, whose plan was to sub-contract Oberthur to do the work.

It was subsequently revealed that Anglo Leasing's agent was a Liverpool-based firm, Saagar Associates.

The company records showed Saagar Associates was owned by Mrs Sudhan Ruparell, a daughter of Chamanlal Kamani, the 72-year-old multi-millionaire patriarch of a business family which enjoyed close links with senior officials in the Moi regime.