Return of the Muck 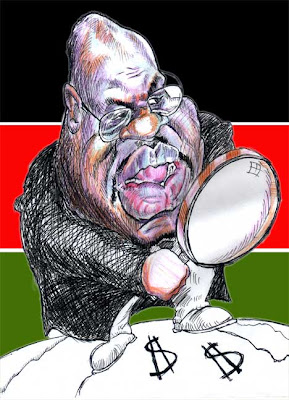 The latest revelations by our very own Taped Crusader have put the spotlight firmly on Attorney-General Amos Wako and the Director of the Kenya Anti-Corruption Commission Justice Aaron Ringera. Coming just days after they rubbished his allegations and evidence of a conspiracy to conceal the Anglo Leasing affair, John Githongo’s new release clearly demonstrates Wako’s and Ringera ‘s complicity in the scheme. They have been caught red-handed attempting to subvert the course of justice and mislead the Kenyan people. The tapes we were told were unintelligible and incoherent turn out to be clearly understandable and on the face of it confirm the allegations of a plot.

Last week’s muted reaction to Githongo’s threats to reveal more damning information indicates that the government was aware of the coming storm. NARC-K politicians who would normally race to outdo one another in issuing condemnations of his treachery were conspicuously silent. The attention-loving government spokesman refused to comment on the matter and the AG himself ducked a scheduled press conference on Monday, preferring instead to fax a statement to newsrooms.

Never in independent Kenya’s history have we had a government as compromised as this one. Even during Kanu’s 40 year looting spree, direct evidence of malfeasance was difficult to come by. But now we have two tapes purporting to show two senior Cabinet Ministers interfering with and attempting to shut down an active investigation. The recordings implicate the Head of State and the agencies charged with investigating and prosecuting these cases, which have themselves been caught in the act of perpetrating a second cover-up.

It is imperative that the government moves fast to reconstruct anew the people’s shattered trust in their institutions. A minimum condition for this to happen is a full and public accounting of the Anglo-Leasing saga and the subsequent cover-up, quickly followed by the prosecution of all those involved. This though has to be preceded by the resignations of not only the concerned Cabinet Ministers, but more importantly those of Wako and Ringera, their credibility having been blown to bits. In fact, the two should be subjects of investigation and prosecution over their attempts to shield the politicians from the law.

If resignations are not forthcoming, then President Kibaki will have the opportunity to salvage whatever is left of his moral authority and legacy by removing the suspects from his Cabinet and initiating the process of firing his both AG and Justice Ringera (they enjoy security of tenure). Failure to do this will be tantamount to an admission of guilt on his part in which case the challenge will come to his employers, the people of Kenya, to rise up and eject him and his foul administration from office. We must not allow this case to go the way of Goldenberg. Once and for all, we must eradicate the culture of executive impunity and in the process reclaim our country and our revolution.
Posted by Gathara at 5:44 PM

Action is the last thing i expect from this absurd regime

i have this feeling that soon githongo will release the ultimate tape! the one where Kibaki himself is telling him to "... wacha hiyo maneno tuu. hii pesa kidogo jameni, wacha watu wakule tuuu ..."

we must act during elections.so that the next crop in jan 08 will know kenyans are no nonsense.we are tired