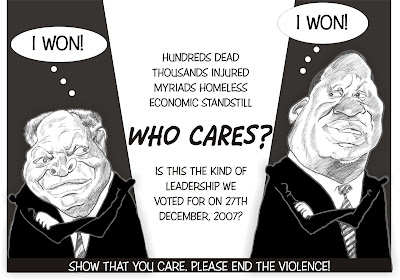 Q: What happens when an unstoppable demagogue meets with an immovable election thief?
A: Kenyans die!
Posted by Gathara at 10:32 AM

Sad, really sad..I blogged on this even before ECK started tallying the results, and I can only say my prediction was more accurate! (http://kingaru.blogspot.com/2007/12/kenyas-election-2007-cry-my-beloved.html)
What annoys you more, is the fact that there's no fundamental difference between these two men; big egos, ex-moi scholars, selfish, visionless. It's just 'our time'; period!

Sad indeed -the hypocrisy of our democracy! I am glad I did not dignify any of these two "honorable men" (I use the term in the sense of Mark Anthony) with my vote. My heart is in the coffin there with Kenya, And I must pause till it come back to me.

Could not have been put across better. It is truly sad. Someone on a radio station suggested that we need to take back our life and country from the big-ego politicians and their likes. I am Waiting to hear suggestions on how, otherwise it becomes empty, nice to hear, chestthumping rhetoric.

let me play the devil's advocate here. assume kalonzo or raila steals the elections a la obaks in 2016. the same dirty trick will have been played on you a second time. what do you do? are there long lasting lessons that you could have taught on the "first one" to banish the thought of a repeat? is it more strategic and in ALL kenyan's interest to have pushed out obaks, that to preach "peace at all costs", only to fall into the same hole further down? could the effort to keep raila from office, inadvertntly, be scuttling the very fundamental lessons that kenya want?

Anon,
I am not for peace without justice. I think we should employ peaceful and legal means to redress the wrong Kibaki has perpetrated. We cannot defend democracy by undermining it. We cannot uphold the rule of law by rejecting it.

I truly believe that this is a wake up call for Kenya. We went to sleep after 2002 and assumed that the work of securing our democracy was done. The last two weeks prove just how wrong we were.

all free nations today, got their independence by "disobeying" laws that were legal, but not in their just interest. ALL. you are subverting natural justice, by asking me to "uphold laws that do not work in my just interest". i am a strict proponent of rules, and peacefulness. but kenyans are caught between disobeying the law, to some extent, and "being peaceful and following legality". i maintain that we ignore "police bans" and show the power of the people, till we get our justice, BUT peacefully; as happened yesterday in Eldoret till the police unjustifiably dispersed them. otherwise, we are just setting ourselves up to be fckd by kalonzo and raila. with obaks in power, i doubt you will get those "constitutional and legislative reviews" that you seem to have a lexicographic preference for.

here is an article for you to read:

Peace fine, but justice holds the key to future stability

Story by OKIYA OMTATA
Publication Date: 1/16/2008
What exactly are all those discordant voices in our midst that are crying out for the much desired peace calling for? Are they pursuing yet another ceasefire or working for durable peace this time around?
I posit that those calling for peace without demanding that justice be done are in reality calling for a ceasefire. That is why they are not sincerely, truthfully and frankly confronting the grievances that led to the flare-up.
That is why they are paying scant or no attention to the need for economic, social, and political justice.
By confusing a ceasefire for peace, they seem to be saying that they want a cessation of hostilities as an end in itself, and not as a prelude to the search for justice.
THAT’S HOW WE LOST THE PROMISE of our so called political independence. We settled for a ceasefire that failed to address the grievances of the masses to institute national peace.
That’s not to say that it is not absolutely necessary and urgent that we stop hostilities. Both PNU and ODM must step back so that those working for justice don’t work in a poisoned atmosphere. But the cessation of hostilities must be seen in its widest form. Violence is not just physical; it can be verbal, psychological, emotional, and spiritual.
It is wrong to define peace in terms of what is missing rather than what is present.
According to the Norwegian peace scholar Johan Galtung, negative peace is the narrow understanding of peace as the absence of war or of “direct” violence, as the end of war, or as interludes between wars.
Under this kind of peace, many forms of “structural” violence (indirect, institutionalised violence) such as economic exploitation, the impunity of the powerful, ethnicity, and corruption still exist. Injustice implies ongoing structural violence against certain peoples or groups.
But peace is not a world without conflict, pain, suffering, and struggle. Peace includes, rather than precludes, conflict. Conflict is a basic fact of life; thus, a world at peace will be full of conflict.
What distinguishes a peaceful world, among other qualities, is the extent to which unnecessary conflict is prevented and all other conflict is managed in non-violent ways.
Conflict and violence are not synonymous terms: Conflict can be violent, but it also can be non-violent; it can be destructive and painful, but it also can be constructive and useful.
Further, we must distinguish the way out of the current crisis from the way forward. The way out is a ceasefire anchored on resolving the disputed presidential elections. But that will only take us back to the standoff days before the flare-up, where we howled and growled at each other but never went for each others’ throats on this scale.
The way forward will be the deliberate search for justice, leading to positive peace, which is not only the absence of all violence but also the presence of justice.
And this requires prediction rather than explanation that simply makes the best sense of what has happened as institutional failure. It requires seeing that Kenya can only be saved through the crafting of a democratic constitution.
And indeed some experts on constitution making have argued in no uncertain terms that for us to get the much craved after democratic constitutional dispensation, we require a profoundly defining and redefining constitutional moment.
That the brief and rare constitutional episode, restricted to foundational issues, is what will afford us a short period of “constitutional” politics (pre-occupied by polity-generative questions) clearly distinguishable from “ordinary” politics (preoccupied with policy-programme issues) which precede and succeed the moment in question.
Just like the bungled presidential elections, a constitutional moment alters the framework within which ordinary politics unfolds. It ensures that the two phases of ordinary politics — before and after — are sharply distinct from each other.
THE CONSTITUTIONAL MOMENT IS thus marked both by discontinuity and by transformation. Because it is discontinuous with and transformative of ordinary politics, the constitutional moment is not constitutionally trivial. It has considerable and lasting constitutional significance. But while its effects are lasting, the constitutional moment is not.
The inconclusive 2007 presidential elections present us with a constitutional moment that literally marks the end of Kenya’s First Republic and beckons the birth of the second one.
If we don’t seize the moment to usher in a democratic constitutional dispensation, the crisis will morph into a monster that will consume all of us.