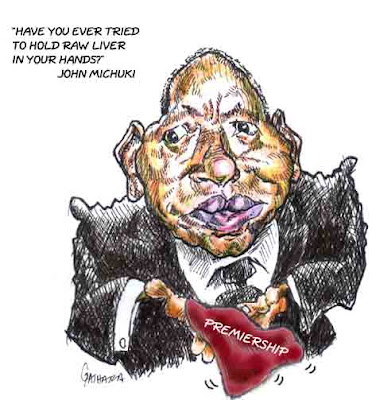 Every nation has its myths. The Americans have their exceptionalism -the supposed "city on a hill", the Koreans their Tan'gun, supposedly the scion of a son of the gods and a bear-turned-into-woman who became the first human king of the people of the peninsula. Kenyans are not to be left out. At death, their politicians are raptured through pearly white gates, instantly forgiven for earthly sins and elevated to the status of national heroes, joining the mythical pantheon that bequeathed uhuru, dignity and relative, if somewhat skewed, prosperity to the population.

The public outpouring of grief over the passing in the past week of John Michuki and Njenga Karume has once again highlighted this cognitive dissonance at the heart of the national narrative. For here, Kenyans are celebrating the lives of people who were part and parcel of the very establishment that consigned them to seemingly perpetual poverty and indignity; persons who openly sought to subvert the constitution in the service of tribal supremacy; who had no qualms about using inordinate violence to instil order and crush dissent in the same way they had previously sought to crush the Mau Mau rebellion; whose accomplishments -such as they were- rarely outlived their time in office; who lived and died in luxury while their countrymen languished in penury.

Kenyans at times appearto suffer from the Stockholm Syndrome where hostages develop positive feelings for their captors. According to Wikipedia, this is a form of traumatic bonding, which causes victims to develop strong emotional ties with those who intermittently harass, beat, threaten, abuse, and intimidate them.

Take the late Michuki, for example. The past few days have seen the newspapers and social media filled with glowing eulogies and tributes to his energy and discipline. In an article in the Daily Nation, Dr. Mukhisa Kituyi, he of the fight for democracy (see my take on him here) approvingly quotes a young woman who describes Michuki "a good dictator." Dr. Kituyi declares that "in a society so beholden to short-term popularity, Michuki did what he thought was right regardless of how popular it was."

"Over the past two decades, the struggle against authoritarian government necessarily gave strong focus to libertarian agitation. The battle call for change has been about rights. The results have been satisfactory. A Constitution that defines and defends all the rights acceptable in a democratic society is in place. But we have in the process behaved as if life is all about haki yetu."

It is interesting that the good Dr. Kituyi does not seem to recall that Michuki once sought to convince Kenyans, following the demise of the KANU dictatorship in 2002, that the reform they had fought so hard and so long for was no longer necessary.

Further, the methods that the "good dictator"employed, such as his preference for extrajudicial murder as a technique for dealing with criminal suspects, are glossed over as mere "mistakes." As one Facebook comment I have seen says:


"Yes, some youth died but let's be practical. They were terrorizing villages and attacked his home, and women bore the front of it by being forced to be circumcised and to join the group! The be-headings ( case in point- a former member's head found dumped in a sack off River rd) that followed if one member 'betrayed' the sect."

Of course the fact that all this is unproven in a court of law, that some innocent people may have been executed along with the Mungiki, is not something to lose sleep over.

There is little discussion of how Michuki acquired his wealth or his nickname "Kimeendero" (meaning the one who crushes) or the fact that he had no scruples about handing out cash as enticements to potential voters during campaigns for public office. None of his being named in Parliament as allegedly demanding US$3 million as protection fee for the Artur brothers or of the "rattlesnake" raid on the Standard offices. None of the various scandals where his name popped up including his decision as Transport Minister in 2003 to exempt a company represented by his son from telecommunications regulations; the allegation by the Public Investment Committee that he, together with Prof Anyang’ Nyong’o, Dr Mukhisa Kituyi had "interfered with tendering processes at the Kenya Ports Authority contrary to government procedure"; or the suspicious speed with which containers of seat belts and speed governors arrived at the Mombasa port shortly after he gazetted his famous "Michuki Rules."

For Kenyans, death is the ultimate sanitizer. In the cemetery that is the collective memory, the tended graves and monuments are reserved for the powerful, the corrupt and the wicked. Their records -purged of indiscretion- are presented as examples to emulate. Meanwhile, the ordinary Kenyans who bore the brunt of their violence, both physical and economic, rest unlamented in unmarked graves.