In Defense of Our Democracy? 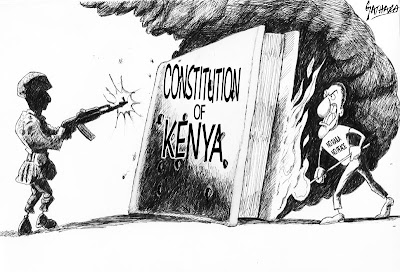 Raila Odinga, during his interview on BBC's Hardtalk yesterday, said he is willing to join a transitional arrangement that would

1) recognise Mwai Kibaki as President still in his first term and
2) create conditions for an independent forensic audit and retallying of the ballots or put in place a truly independent ECK to organise a re-run of the Presidential election.

Most importantly, he said he would abide by the results even in the unlikely event (his words) that a retallying showed a Kibaki win.

I think there is still remains an opportunity to salvage the nation and even to make the necessary constitutional changes that would enable us to emerge from the crisis as a stronger democracy.
Posted by Gathara at 4:23 PM

Instead of dwelling on who holds the keys to the white house, time for Odinga to invest the time and money that he'd like to use on a re-election/audit in recovering the nation's economy. Poverty will breed more hatred, anger and greed. How can he do this: by investing his efforts in parliament (seeing his party are in the majority).