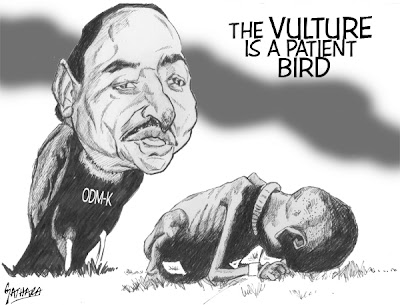 Hehehe - getting real deep with the innuendos, are we?!

This guys were on PNU's pay roll all along, and this is the 'just' reward!

They haven't caused over votes being stolen in Eastern - why?

Who bankrolled their campaigns?

Why did they stick with breaking up with ODM instead of just staying put, or joining PNU, when it was rather obvious to the whole wide world they were loosing?

Poor Kenyans, we really do not understand democracy at all do we? First of all it was Raila and company who left ODM-K, remember? Now how would you expect that Kalonzo would defect to join him? Should you not be encouraging such independence of thought?

Secondly, why would Kalonzo join the PNU at that time? His campaign position was very different than theirs! Very different.

Why carry on with the fantasy that the PNU paid Kalonzo? There is absolutely no evidence for it, in fact Kalonzo hurt Kibaki far more than he hurt Raila. The ODM certainly know this, I wonder why it is not more obvious to you?

You need to ask yourselves why you have this pathological hatred for Kalonzo. It makes absolutely no sense, but then again you are Kenyans, right? Please research on the workings of a democracy, look into the UK's Liberal Democrats, or better still the FDP and the Greens in Germany, or the Green Parties across Northern Europe. Kalonzo has played a very smart move, too bad he is a politician in such a backward country.

First, I stand corrected, yes, Kalonzo (with the help of Dan Maanzo) kept the ODM-K certificate under lock and key...

Now, back to your insult...some of us know far more sensitive and detrimental info on some high profile people, repeat ing it would be suicidal. That said, I have nothing personal against Kalonzo - far from it! I admire his cunning. From the word go, the 'donkey' was the only winner, and so it has passed. Did/will it help his people? We wait. Is he principled? Nope, not a bone in his body. Neither is he bold, or rash. He's a gentleman, laid back, composed, and sadly, spineless.

Secondly, now compare http://www.youtube.com/watch?v=5aVocVdp9h4
him with Obama (or any of the domo domo nonsense we were treated - sorry - subjected to, and you see the difference. He's not half a leader..

Thirdly, kindly do not lump us (non-Kalonzo adherents) with fools. Two wrongs don't make a right, and just because some people are willing to point it out, doesn't make them supporters of any grouping. And as I said before, you don't know, what I do!

Have a lovely week!

if with 8% national support, you still can end up "second in waiting" to the throne, one wonders.....what smarts are needed to run kenya? what happened to meritocracy, however measured? i read kalonzo's slamming of obaks on so many occasions and over several issues, that i am TOTALLY puzzled what they agree on!

Anon,
I know exactly what they agree on: It's time to "eat"!

hehehehe! Anon, that's why neither you or I was sworn in last night...schemers!