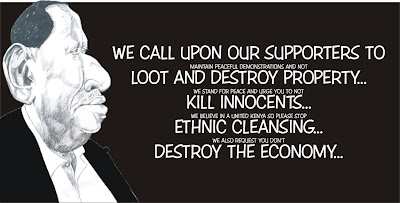 The crisis the country is above all attributable to a failure in leadership. None of the protagonists (Mwai Kibaki and Raila Odinga) could bring themselves to rise above their individual interests in securing power. They have both deliberately trampled on the national interest in their vainglorious search for personal fulfilment. Kibaki, seeking to extend his State House tenancy undoubtedly stole the election, and thus brought us to the brink of this precipice. However, Odinga's reaction to this injustice is what is now threatening to push us over the edge.

Over the past week, Kenyans have been disabused of the notion that we are somehow immune to the sorts of state collapse and genocidal tendencies that characterise much of the rest of Africa. Long touted as "an island of peace and stability" we have suddenly come face to face with the reality that underneath the seeming calm lies a smouldering volcano of disaffection, hate, desperation and fear. It is no coincidence that most of the carnage we are witnessing on our TV screens is visited upon the poor, by the poor.

I live in a middle class housing estate, only a few hundred metres from the Kibera slums. Yet, the place is no need of police protection. None ofthe rioting mobs has ventured close in spite of the lack of a police presence. While looting, chaos and death have reigned within the slum, we have been carrying on as normal, only slightly inconvenienced by the fact that the supermarkets, restaurants and bars were closed.

What we are witnessing in Kenya is more than just a political crisis with tribal overtones. It is the result of decades of unequal development that has led to one of the most inequitable societies on earth. The richest 10% (who are drawn from almost every tribe) of our society control the vast majority of our GDP. The people rioting in the streets are part of the 46% of our population that lives on less than $1 a day. They have nothing to lose. 5 years of steady economic growth under Kibaki has clearly demonstrated to them that even in boomtime, they will gain nothing. The UN's Human Development Index indicates that they are worse off today than they were 5 years ago. Inflation is running at levels not seen since the economic collapse of 1990s.

So they jump onto the ODM bandwagon which promises more equitable distribution of resources. It is immaterail that the populist Odinga is one of the wealthiest people in the land. It is also immaterial that he once joined the kleptocratic Moi in government (ironically denouncing the sorts of unlicensed political rallies he is calling for today as "treasonous"). All that matters is that he is offering an alternative (however illusory) to a deperate and marginalised people. It is the proverbial straw that the drowning man will clutch for.

Yet, as events in past few days have demonstrated, neither Odinga nor Kibaki have much regard for the suffering of their fellow Kenyans. They are content to issue alarmist and inciting statements from the comfort and safety of their fortified, luxurious homes. Each passing day they polarise the country further with their political brinkmanship.

However, the country is fighting back. Led by the media, artists, businesspeople and trade unionists, many are rejecting the slide towards anarchy. In this, I find a great deal of hope. For if we can develop alternative centres of power and influence, and rob the political class of the all-encompassing grip it has on our collective throat, then future political problems can be quarantined within the political sphere and not allowed to infect the rest of society.
Posted by Gathara at 1:24 PM

Excellent article. I am an Ethiopian and have been following closely the post electoral violence in Kenya. My prayers are with my Kenyan brothers and sisters. I hope reason will prevail and Kenyans will start the healing process sooner rather than later.

In hindsight, I believe the electoral dispute in the 2005 Ethiopian parliamentary elections could have led to the same degree of violence had the government not reacted firmly and rounded up 30,000 inner city slum dwellers suspected of involvement in the violence and put them in prison for a few days (that being said, the murders committed by the police are deplorable, to say the least). The government may have lost the elections and wanted to stay in power by any means necessary, but there were also credible reports that some residents of Addis Ababa were stocking up on machetes... The recent events in Kenya may have vindicated Meles Zenawi.

The poor in Ethiopia are worse off than in Kenya and although the gap between the haves and have-nots is not as bad, it's widening. There is also an increasing hatred towards the Tigres because of a real and apparent perception that they are overly represented in government. With twice the number of population and ethnic groups, and a plethora of liberation fronts, there is a serious risk that things could get out of hand in the 2010 Ethiopian elections and beyond. I hope Ethiopians will look at Kenya and wake up and smell the coffee.

I agree that economic growth in Africa should be more equitable. What Africa needs is not more tribalism and fake multi-party elections but less corruption,more transparent institutions, a better tax collection, an effective redistribution of wealth, improved social safety nets and education for the poor. We also need a better, if not a compulsory, civic education on the meaning of democracy and tolerance in order to get rid of the winner-take all mentality that's dragging the continent down.