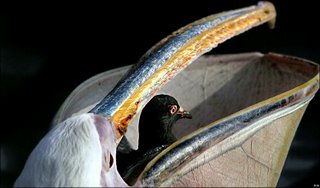 Families and tourists in a London park were left shocked when a pelican picked up and swallowed a pigeon.

The unusual wildlife spectacle in St James's Park was caught on camera by photographer Cathal McNaughton.

Hodi!
I thought I'd stop by and say how very much I appreciated your comments on my recent posting (and also how much I like your blog, which I had not read before.) You are right,of course--I'm not thrilled with Malawians either, or, for that matter, with Namibians and their governments. Nor with Kenyans and our government, if it comes to that.

However, I just can't stand being perpetually "saved," which really means being stage scenery for the drama of white/western virtue enacted by Geldorf, Bono, and assorted variations on this type of person. Today Madonna insisted that really, EVERYBODY in the West who has the means to do so should follow her example, because, my god, she's BEEN there, she has seen FOR HERSELF the terrible terrible conditions these pathetic Africans and their children are suffering. Don't people realise that Africans are living in POVERTY, with OPEN SEWAGE and AIDs?? My beef with Madonna--thus the basis for my rant--is that, whilst I am extremely admiring of her ability to constantly reinvent herself, and to force the world to take her on her own constantly changing terms, I don't think this reinvention should use African babies, sorry African baby (one), as a prop for her new philanthropic version of herself. However, it is true that I in any case think the whole celebrity universe is pretty much a surreal nightmare planet, the outstanding characterist of which is its capacity to devour souls, decency, and the capacity to think (okay, Steve Martin's an exception, and perhaps a few others.) In the main, Planet Celebrity is populated by vain, self-absorbed, shallow, selfish people who manage to be simultaneously immensely insecure and fantastically egomaniacal. I'm frankly horrified for Baby David.
More to the point, the "horrors of Africa" is a trope that works to bolster the smugness and complacency of the West and I am weary of it. Our governments are either comatose or actually evil--that doesn't make the rest of us pathetic and helpless victims of our circumstances. I think you and I are saying the same things, more or less, really: I probably just didn't express myself as well as I could have. In whatever event, thanks again for stopping by and for your thoughtful comments. I hope you'll be back.