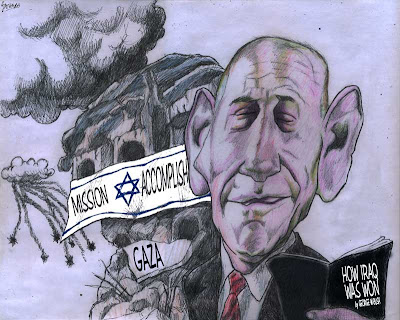 Having failed to achieve the initial aim of destroying Hamas, and then, after lowering expectations, failed to destroy the group's rocket launching abilities, murdered over 1000 innocents, undermined the Mahmoud Abbas administration and legitimized Hamas, Israel declared its military objectives in Gaza had been met and announced a unilateral ceasefire. If this is success, I wonder what failure would look like! George Mitchell certainly has his work cut out.
Posted by Gathara at 10:14 PM

To make love, or to make war? It seems like when either is made, it is in the name of pleasure [or is it peace?]. I get the feeling that the world is very benumbed to reality, caused by years of avoiding hard decisions. Kwani when these choices are being made, they ask, "Chick flick or action, what do people want?"