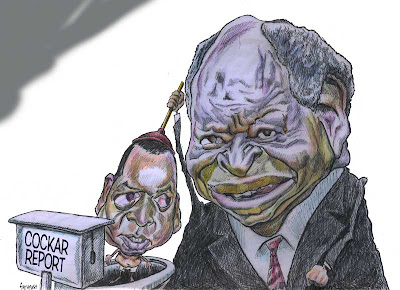 After declaring he had rather die than resign, then "stepping aside" to allow for independent investigations which reportedly found him culpable for misleading parliament andselling the Grand Regency hotel with undue haste and secrecy, Amos Kimunya is back in Mwai Kibaki's promised "Clean Cabinet".
He joins a distinguished group of presidential cronies who have been, despite all evidence to the contrary, "cleared of wrongdoing" (at least in the President's fevered imagination). The Fellowship of the Wringer. It includes persons such as George Saitoti, Fred Gumo, David Mwiraria and Kiraitu Murungi, who after being caught with their hands in the public till, are forced to resign (OK, OK Amos, step aside), subjected to Commissions of Inquiry whose reports and recommendations are neither released nor implemented and after a short stint in the backbenches to allow for public tempers to cool down, are reappointed to the Cabinet.
The oldest members of this fellowship are Saitoti and Gumo, who even prior to Kibaki taking power had been included in a "List of Shame" in a report into the Goldenberg scandal by the Parliamentary Select Committee on Anti-Corruption and Economic Crimes (popularly known as the Kombo report).  That report recommended that they both "be investigated with a view to prosecution" and candidate Kibaki promised to implement in full the recommendations. However, one of the first acts of Kibaki's Presidency was to appoint the two to his Cabinet! A subsequent Commission of Inquiry into Goldenberg also recommended that Saitoti be prosecuted. However, he managed to convince a constitutional court that he had been "cleared" by his fellow MPs. Attorney-General Amos Wako vowed to appeal that particular constitutional court ruling though an appeal that is yet to materialise several years later.
And when it comes to being cleared by Paliament, Mwiraria's name was expunged from the Parliamentary Accounts Committee report into the Anglo-Leasing scandal, largely at the instigation of that other anti-corruption crusader, Justice Minister Martha Karua (who in an interview with the BBC's Hardtalk two years ago said that she could offer no evidence that the war on corruption was being won and admitted that after more than 4 years in power,the Kibaki administration could not produce a single corruption conviction of note). During the vote, the August House was less than a quarter full, and the motion was passed by a majority of 3 with Mwiraria himself casting one of those votes in his own favour! A thunderous vindication indeed!
President Kibaki has shown a propensity for disregarding the recommendations of the people he appoints to investigate corruption when their reports threaten to disturb hios otherwise peaceful slumber. He was AWOL when his own anti-corruption czar, John Githongo, was asked to "ngo srowry" in his investigations into Anglo-Leasing and eventually hounded out of the country, his evidence dismissed on the spurious assertion that it did not matter because he was not an "investigator".  The Kroll report into the looting of Kenya under Moi was kept under wraps for over 3 years and has not been acted upon till today. Similarly, Kibaki has now ignored the recomendations of the Cockar Report which he himself commissioned.
Thus we conduct the War on Corruption.
Posted by Gathara at 9:43 AM

One thing that irks me is how the Head of State is always conveniently left out of these corruption scandals. Lists of shame normally include presidential aides/advisors, members of kitchen cabinets, MP's, et cetera, but no President. Are we to believe that 'Baba wa Taifa' has no clue as to who, how, when, and what is eating mali ya umma? No wonder these chaps are so emboldened. If mkubwa is doing it, and not resigning, why should they?

I am curious to see what the "rest" of the Kenyan public will do. particularly if a constituency that will emerge to use the plentiful "fodder & rope" so gleefully provided by current gava....and pretty much put them out of bizness. i just read up on wangari maathais' latest opinion piece in the daily nation....she is quite strange these days!

Anon,
I do not believe that such a constituency as you describe will evolve. Kenyans are notoriously fickle. These events will be soon forgotten.