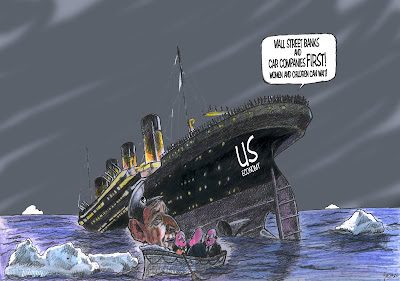 The Weekly Telegraph is reporting that the US porn industry is seeking a multi-billion dollar bailout from Washington similar to the ones dished out to failing banks and car companies. According to Larry Flynt, founder of Hustler magazine, the state of the US economy has many Americans "too depressed to be sexually active" and has teamed up with Joe Francis, creator of the Girls Gone Wild video series and convicted child abuser, to urge the government to pump in $5 billion "to rejuvenate the sexual appetite of America."
The pair acknowledged that , though DVD sales were down 22%, online traffic was booming and the $13 billion industry was not in any immediate danger of going limp. However, Flynt warned of dire consequences should the feds fail to get it (the bailout) up. "Americans can do without cars and such, but they cannot do without sex."
Posted by Gathara at 12:48 PM