The Eating Season Is Here 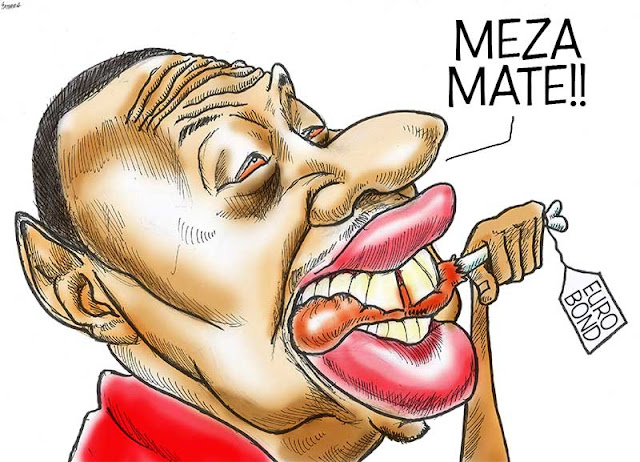 I have a theory about why our political parties engage in obscene shows of wealth in the midst of the dire poverty that pervades Kenya. In a country where politics has been reduced to an eating competition, politicians must demonstrate to their supporters that they are capable of laying on the buffet.

From the reported 2 billion that the Jubilee Party spent on its coming out party to the fleet of swanky new buses that CORD has unveiled in Mombasa ahead of its ten-year anniversary, the political coalitions are attempting to outdo each other in parading their wealth. During the last campaign season, helicopters became an indispensable asset and as we approach the 2017 poll, it is clear that no politician worth his salt will be seen dead without one. Their importance to the political class can be seen in the oft-cited fact that they are exempted from VAT even when school books aren’t.

For the people, such displays of opulence are meant to signal that the season for feasting has begun. In return for a seat at the table of state where the country is gobbled up, the politicians will dispense their largesse. The choppers and Prados, the buildings and buses, are the promise of that.

The limits on campaign finance spending recently announced by the Independent Electoral and Boundaries Commission will do little to diminish appetites. With Presidential candidates each officially allowed to spend up to Sh5.2 billion, candidates for 337 Parliamentary seats dishing out up to Sh30 million each; potential Governors and Senators for the 47 counties each allowed to serve up Sh443 million, and folks competing to be one of the country’s 2,258 MCAs offering up to Sh10 million each, it is clear that there will be plenty of money rolling around. And that’s only what they officially spend.

Unofficially, you can expect much more will be on offer. Given the ambiguity surrounding the IEBC regulations and lack of clarity about how they are to be enforced, it is unlikely that there’ll be much of a deterrent to exceeding the stated limits. For example, the period covered by the new regulations is the six months prior to August 8, 2017, the date of the next General Election. But five months ahead of the February 8 start date for the official campaign period, the country is already firmly on an election footing and money is already being spent without IEBC oversight.

Clearly, many, many billions will be poured over the next year or so.

The question is: What will these billions be buying? And sadly, for many, it will be silence and acquiescence. For most Kenyans, whose lives have been blighted by governmental neglect, theft and oppression, this is their one chance to get something back from the system which only seems to take. They know, from previous experience, there is little chance that all the promises that candidates and manifestos will make will amount to anything after the polls. They know that the system which their vote will legitimize is already rigged against them; once the politicians are in office, the opportunity to hold them accountable effectively disappears.

For example, although the constitution guarantees that the electorate has the right to recall an MP before the end of his term, it also effectively defeats its purpose by saying those very MPs will “enact legislation to provide for the grounds on which a member may be recalled and the procedure to be followed.” Predictably, the MPs made sure it would take nothing short of a miracle for them to so lose their seats. The law is currently being challenged in court.

For many, the electoral period is their only chance to “eat”. And in return, they will be expected to stay silent as the politicians steal and kill in their name. “You took our money and voted for us therefore you are complicit in our robbing you”.

But it is all little more than a ruse; a false bargain since the people are essentially forced to negotiate with a gun held to their heads. The displays of opulence that inaugurate the start of the eating season serve to hide the violence of the dispossession under a veneer of civility and mutual consent. “Willing buyer, willing seller” as Uhuru Kenyatta famously described it in 2013.

Remember that as you take your place at the national buffet. Bon Appétit.

Meza mate? Swallow saliva in ChiKaranga (Shona). On politics, we have the same plague in Zimbabwe.