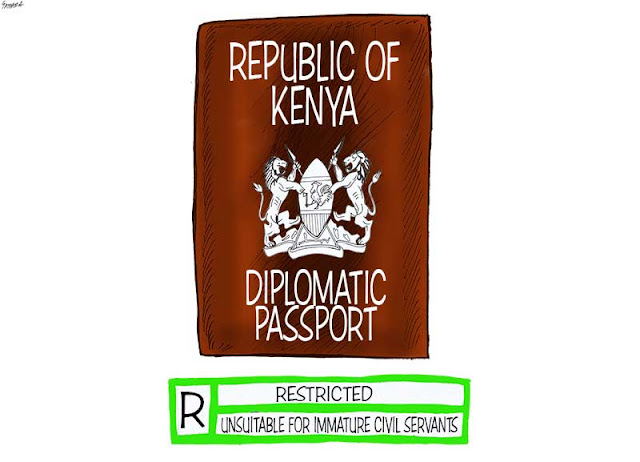 Ezekiel Mutua is at it again. The head of the Kenya Film Classification Board has developed a fondness for showing off the perks that come with his job. In April, he took to social media to boast about using an airport’s VIP lounge and flying business class.

This week, he posted pictures of his diplomatic passport (which, to the schadenfreudic glee of many tweeps, an embarrassed government has since ordered to him to surrender) on his Facebook account to brag that he had received a visa to visit the United States despite his bigoted and illegal crusade against “content promoting LGBT and Atheists culture in Kenya”. "I didn't even have to go to the Embassy for biometrics or pay the visa application fee. It was delivered to my office free of charge," he averred.

Mutua’s immaturity predictably drew a large number of mocking responses which only spurred him on to new lows, petulantly sending insulting direct message calling one “an idiot” and a “bloody fool”. But however disgraceful we might think his antics to be, we should be careful not to be distracted by them.

It would be a deadly mistake to focus on the theatrics and ignore the real danger. For that lies, not in his braggadocio, but in the silence that has greeted his distorting the law and the constitution in an attempt to impose his views and beliefs on the rest of Kenya.

Mutua has used the KFCB, which was set up to regulate “the making and exhibition of cinematograph films, for the licensing of stage plays, theatres and cinemas” in ways not contemplated in legislation. He has attempted to police parties, the internet, TV ads and even claimed the power to regulate the content of political shows. Though there is no law criminalizing homosexuality, he purports to declare it illegal and to ban internet videos that celebrate love between same sex couples. He has claimed that atheism is similarly unconstitutional despite the clear constitutional prohibition on establishing a state religion.

Yet few of these outrages have elicited much discussion outside social media. Much of Kenyan media seems to be blissfully unaware or even worse, dismissive, of the threat he poses especially as we head into the election season. If nothing else, one would expect that the idea of a government official prescribing the limits of political speech would have both journalists and opposition politicians up in arms. But it has elicited little more than whimpers and an empty threat to sue from media owners, which Mutua has laughed off.

This silence mirrors a wider quiet, a tendency to focus less on the substantial and more on the superficial. Last week, as the country marked the third anniversary of the horrific attack on the Westgate mall, I noted that official accounts of terror incidents were mostly designed to cover up the incompetence and culpability of senior officials and officers rather than reveal the truth. But the really alarming fact is that the government’s obviously flawed tales do not elicit much commentary or questioning from either the press, civil society or the opposition.

But just as the silence over the mistakes and criminality at Westgate allowed them to be repeated at Mpeketoni, Garissa, Mandera and El Adde, so the silence over Mutua's overreaching only serves to embolden him and spur him on to further violations. Like the proverbial frog slowly boiled alive, we are all imperiled by the failure to raise the alarm over his menacing of citizens and the government attempt to control the lives and opinions of citizens.

Kenyan novelist, Yvonne Owuor, has described silence as one of our languages, which "plays out in the hasty attempt of the powerful to shut down independent voices that cannot be controlled." From the harassment of bloggers, to the firing of free-minded journalists, editors and cartoonists, this "shutting down" has been particularly evident in Kenya media. But it is not only happening there. Today Mutua is illegally transforming the KFCB into a tool to bludgeon vulnerable minorities -and political dissidents- into silence.

It is a truism worth repeating that eternal vigilance is the price of liberty. Whether it is about security and terrorism or the diminution of citizens’ rights to free speech and conscience, this silence leaves us all vulnerable. Freedom from predation by terrorists or even by a narcissistic and insecure public official, will only come when we loudly and consistently demand it.