The Price Of A Good Kenyan Name 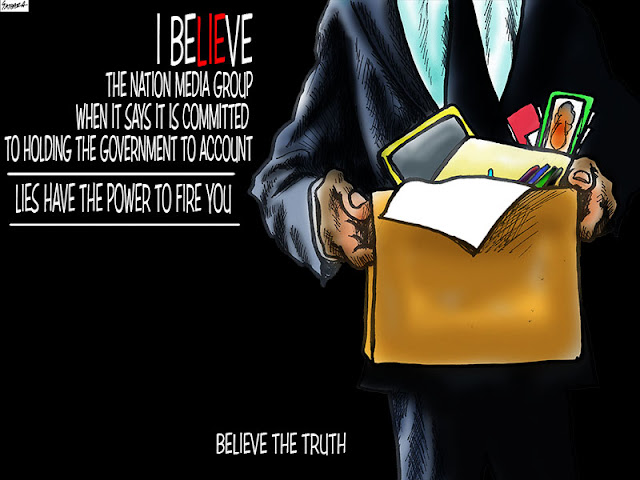 Kenyan media is going through a torrid time. Once described as one of the most vibrant and critical on the continent, it is today looking like little more than a shadow of its former self. From the firing, reportedly at the behest of the state, of editors and journalists at the country’s two leading newspapers, The Daily Nation and The Standard, to the anodyne and superficial coverage of governmental malfeasance, media in Kenya appears to have raised the white flag of surrender.

It must be particularly humiliating for our veteran journalists, many of whom cut their teeth standing up to and exposing the ills of the dictatorship of Daniel Arap Moi only to see their publications succumb to the supposedly more democratic regimes that succeeded it. It is a sign that despite all the reforms that have been enacted, including the adoption of a new progressive constitution, little has changed in the fundamental dynamic between the rulers and the ruled. Kenya still very much remains a country of wenyenchi and wananchi.

And every so often, when one peers behind the timid headlines, one is reminded of this.

This week, the newspapers reported on the now “retired” Mr Moi apparently “breaking his long silence” to warn that corruption under the Uhuru Kenyatta administration was “getting out of hand” and to “urge Kenyans to help the government to wage the war on graft.” Now, the irony will not be lost on many Kenyans: the man who presided over a 24-year kleptocracy, and who is still allowed to enjoy the illicit fruit undisturbed, today calls corruption “this bad thing”. Talk about glass houses and throwing stones!

However underneath the comical rubbish that is Mr Moi’s condemnation of graft, lies a gem. For the aging kleptocrat unwittingly offers valuable insight into how Kenya’s ruling and still thieving elite sees its own corruption. And why so little has changed since he left power.

Notice that Mr Moi is not particularly distressed by the misery graft has visited on Kenyans. The fact that corruption has destroyed lives and livelihoods, robbed kids of their future and impoverished millions pales into significance compared with the fact that it has given "the government a bad image". Further, the talk of it "getting out of hand" appears to imply that some level of abuse of public office for private gain is fine. Graft, it seems, is only bad when many officials do it, causing government to get blamed. Mr Moi appears to pine for the good old days when the eating was "in control".

In his eyes, corruption is not a vice to be eliminated. It is a resource to be managed lest over-exploitation causes disaffection, either among the people or, more likely given his history, among the donors. Thus the problem is not that corruption kills or impoverishes. The real crime is in exposing it and giving government "a bad image".

One only has to compare this to the prevailing rhetoric from the Kenyatta administration and its communications minions, to appreciate that it is the prevalent view among our ruling elite. Late last year, Kenyans loudly demanding a proper accounting of the Kshs 200b the government had borrowed via a Eurobond were warned that their questions, not the government’s inability to provide convincing answers, were sabotaging the economy. On social media sites, criticism of government is being equated with a destructive negativity, and the media is constantly being urged to opt for “positive” news.

Thus coverage of the plunder of Kenya’s wildlife is more likely to steer clear of the government’s role in protecting poachers and to focus attention on the fact that President Kenyatta has invited A-list Hollywood celebrities such as Leonardo DiCaprio to witness the burning of Kenya’s ivory stockpile.

Similarly, GoK has tended to deal with insecurity and terrorism primarily as threats to its image, not as threats to the lives of Kenyans. The failure to institute a promised public inquiry into security lapses and response failures linked to the September 2013 Westgate attack can be attributed squarely to the imperative to protect government’s “good name” and avoid accountability. A similar dynamic is at work in the two-month silence over the casualties of the Al Shabaab attack on a Kenyan-manned AMISOM base in El Adde, Somalia.

The effective binning in Parliament of the report of the Truth, Justice and Reconciliation Commission also illustrates the elite belief that historical injustices can be solved via transient political arrangements and empty rhetoric about "restorative justice".

It all boils down to the conflation of Kenyans’ troubles with those of its politicians. In this formulation, citizens don't have bread-and-butter issues. They have "political problems" requiring "political solutions". An ethnic community’s welfare is improved, and its poverty vicariously eradicated, by granting its political sons opportunities to “eat” public resources. And conversely, it is impoverished by their exclusion from the feast.

Thus the response of the Jubilee government to allegations of corruption, which has essentially been to point out that the leaders of the opposition CORD coalition are similarly implicated, is entirely understandable. Because, as Mr Moi has revealed, the problem is not that public money has been stolen, but that the government is getting blamed for it. And the reason why so little has changed since he left power is that this continues to be the problem Kenyan politicians are grappling with.

They don't want to change the system. They want their turn to eat.

Garth, on a different matter, I often watch some Ktn tv debates on replay on the internet from here in Scotland. I have realised that whenever there is a hot debate where the govt is loosing - the video clips are often "scrambled". Maybe I am just wrong - but it is worth checking - I am beginning to see a pattern. Technology is so good all over the world nowadays that such incidences NEVER EVER happen eg on BBC.
VLO.

What a great giveaway! Thank you for your wonderful review,It inspires me a lot. Keep posting.
หวยชุดรัฐบาล

I have checked your new blog and I want to say that it is really awesome!
ดูบอลสด
ผลบอลเมื่อคืน
ผลบอลสด

If you're American, soccer probably isn't your cuppa tea.
ข่าวด่วนวันนี้

First of all, at all times I used the soccer teams themselves as a starting point.
ข่าวสดวันนี้