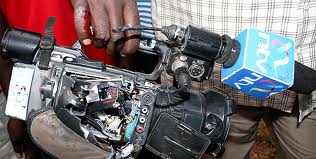 A local journalist displays a camera vandalized by
frustrated foreign correspondents at a polling station.

Anger and frustration are said to be rising within the foreign correspondent community as expectations of widespread chaos during the Kenyan election fade.

Hopes had been raised by the butchering of 12 people, including 6 police officers, in the coastal city of Mombasa, but have now been replaced by a growing sense of disappointment.

Many have expressed shock at the alarming shortage of bad news stories and pictures of machete-wielding tribal youths.

"This is a hoax!" exclaimed one of the correspondents. "Even the politicians are saying they will accept the results. What are we supposed to report now?" he asked dejectedly.

At polling stations, tens of bewildered reporters were seen huddled in small groups and conversing in low tones. "This is not what our audience is expecting to see," said one, who declined to giver her name. "They watch CNN and read the Financial Times and know that people are arming themselves and politicians won't concede," she said.

"Kenyans are playing with fire," said another. "If they do not get their act together during the presidential run-off, major news networks will no longer be interested in covering the country," he added.

Kenyan authorities are scrambling to diffuse the tensions, promising a slew of corruption scandals and broken promises in the coming months but this is unlikely to assuage the anger. "We were given the same promises before the election but now look at what has happened," said one photographer."We cannot trust them any more and we will be taking action," he added ominously.

A hotline (072-PISSOFF) has been opened to assist any reporters who may be traumatised by the lack of violence.