Peace For Our Time 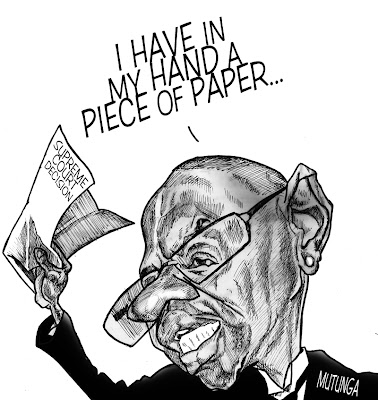 On 30 September 1938, British Prime Minister, Neville Chamberlain, walked the steps of a plane at the Heston Aerodrome in London brandishing a piece of paper, the result of negotiations he had had with the German Chancellor. “I believe this is peace for our time,” he would later say, a phrase he would come to regret. For a world still traumatised by the Great War which had ended just two decades prior, the news of an agreement between the British and the Germans averting another catastrophe was welcome.  “Good man,” US President Franklin Roosevelt telegraphed from the across the Atlantic.

The Munich Agreement would turn out to be nothing more than a temporary stay and within a year the globe would be consumed by an even greater conflict. Three quarters of a century later, Kenyans find themselves at a similarly pivotal moment. Like the British at the time, memories of a recent conflict are still fresh. Like them, our overriding objective is to avoid a repeat. We too have been guilty of selling out the weak in the course of doing so.

Today, all eyes are on the Supreme Court. With bated breath the country awaits its decision on the petitions challenging the outcome of the election. The court’s decision may resolve the question of who becomes the next president of the republic, but like the Munich Agreement, it will only be a balm on a festering wound. It will not address the feelings and emotions tearing at our hearts, the underlying currents rending our national soul.

The fixation with who becomes president is diverting our energies from more fruitful pursuits. More important than who moves into Statehouse after its current tenant vacates is what that person does. And we should give thought to a post-election agenda to tackle the issues that have been highlighted by the election.

The urgent priority must be to begin the process of healing the country following a bruising election. The president, whoever it is, must recognize that half the country voted against him. This is not a time for chest-thumping and claiming wide ranging mandates. It is rather a time to reach out.  Also, there is an urgent need to build bridges between our polarised communities and begin to address the root causes of that polarisation. We cannot afford to spend another five years burying our heads in the sand. Our ignorance has not brought us bliss, and it is unlikely to.

The work of the Truth, Justice and Reconciliation Commission will be crucial to this. The Commission’s report is due out in just over a month’s time and should cover gross violations of human rights, economic crimes, illegal acquisition of public land and the marginalization of communities. That report can form the basis for a national catharsis. For the first time, the country can bare its soul and confront the past. It must be made public and not be hidden like other reports that have gathered dust on the presidential shelf. Victims must be given the opportunity voice to their pain, families to grieve and sinners can seek penitence.

According David Tolbert, president of the International Centre for Transitional Justice, “truth commissions work more effectively when they complement the work of criminal justice, reparations programmes and institutional reform.” If the TJRC will have done a thorough job, and it is hoped that it will, then its report should make for uncomfortable reading for many of our most powerful and long self-serving public officials. The TJRC may not have the power to prosecute, but it can recommend prosecutions, reparations for victims, institutional changes, and amnesty.

The implementation of these recommendations will fall squarely on the incoming administration and its leader must be seen to act quickly and to act comprehensively. It will not do to repeat the pattern of the past with the charade of half-hearted prosecutions. If it is to be a credible exercise, the justice must be real. There must be no return to business as usual. Necessary reforms must be undertaken to prevent future injustice.

If this is done then Kenya will be well on its way to a real recovery. Defending the rights of the weak and the marginalised, not ignoring them, is the true path to a genuine peace.

viva Kenya. thanks for your excellent writing, mzee.

Hey Gath,
thank you for your posts they give me the solace that i can only dream of.

Gath as always, a fantastic piece...but alas we know what reality awaits us however gets into the State House...