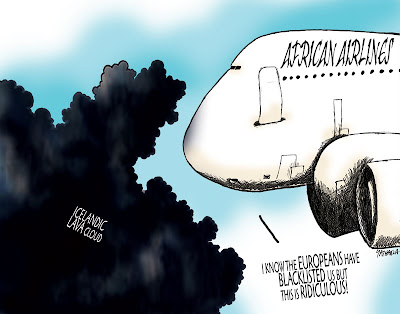 According to a 2005 International Air Transportation Association (IATA) report, Africa has a crash rate 9 times the world average. Though the continent accounts for only 4% of global air traffic it is home to more than a quarter of all air crashes. And the situation is worsening.

Between 1996 and 2005, the number of fatal crashes per million departures, already the worst in the world, rose from 3.6 to 5. In 2006, alarmed by the grim statistics, then African Civil Aviation Commission (AFCAC) president Tshepo Pheege threatened to name and shame airlines operating what he called "flying coffins." "You don't want to fly out as a passenger and come back as cargo," he added. Although African carriers account for more accidents than airlines on any other continent, Ethiopian Airlines, together with South African Airways and Kenya Airways, have air safety records that are similar to those of most European airlines.

However, for most airlines on the continent, maintaining good safety records is so much pie-in-the-sky. Much of the carnage is caused by low investment due to a weak local environment. African carriers transport less than a third of travelers to and from the continent and the intra-Africa aviation network remains weak. The continent has failed to fully implement the Yamoussoukro declaration, which was meant to open the African airspace to African carriers meaning that in some cases one has to connect through Europe in order to fly from one African city to another.

The results are plain to see. A tiny air transport industry which has created a total of 500,000 jobs compared with a global total of 29 million. In 2003, the average fleet age on the continent was 20 years, double the average for the rest of the world. Air navigation and proper management of the continental airspace is hindered by old and obsolete equipment and by the limited ability of some African states to maintain a national safety oversight workforce. International Civil Aviation Organization (ICAO) safety oversight audits have shown that many African Countries have not established effective oversight systems within the Civil Aviation Authorities.

All this comes at a time when the number of Africans willing and able to fly is exploding. A 2008 IATA report shows that while the growth in international passenger numbers was a sluggish 0.7%, Africa’s internal passenger growth was 18%. This cocktail of factors is making for a lethal recipe. As the skies get ever more crowded, overwhelmed and understaffed authorities are struggling to cope.

Here are some of the major air accidents involving African carriers in the past decade.

Jan 30, 2000 - Kenya Airways Airbus A-310 crashed in the sea shortly after takeoff from Abidjan in the Ivory Coast, killing 179 passengers and crew (Ten people survived).

Aug 23, 2000 - Gulf Air Airbus A320 crashed in the waters off Bahrain on a flight from Cairo, killing all 143 aboard. Pilot disorientation (the "pitch-up illusion" over the black waters of the Gulf at night).

Nov 1, 2000 - Russian-built passenger plane crashes after exploding in the air in northeastern Angola, killing all 48 people on board. UNITA rebels say they shot it down.

Nov 15, 2000 - An Antonov plane crashes near Angola's capital Luanda, killing all 39 people aboard.

Feb 08, 2002 - A Ukrainian AN-32 cargo plane crashed high in the Atlas mountains of southern Morocco at 9,900ft and killed all eight crew members, not long after leaving the coastal city of Agadir, 370 miles south of Rabat.

May 4, 2002 - BAC 1-11-500 belonging to Nigeria's EAS Airlines with 105 people on board bound for Lagos crashes and bursts into flames in the northern Nigerian city of Kano.  It plowed into a poor, densely populated suburb shortly after takeoff, killing 148. Dead included all 76 aboard and dozens on the ground.

July 8, 2003 - Port Sudan, Sudan: A Sudan Airways airplane, a Boeing 737, experienced technical difficulties shortly after takeoff and crashed while attempting to return to the Port Sudan airport. One child survived and 116 passengers and crew perished.

June 10, 2008 - Narok District, Kenya: All four occupants, including Kenyan Roads Minister Kipkalya Kones and an Assistant Minister in the Office of the Vice-President, Lorna Laboso, killed when their Cessna 210E plane crashes in bad weather.

June 30, 2009 - Yemenia Airways Flight 626 crashes while trying to land in the Comoros island killing all but one of the 153 people on board.
Posted by Gathara at 9:58 PM