I Have A (pipe) Dream 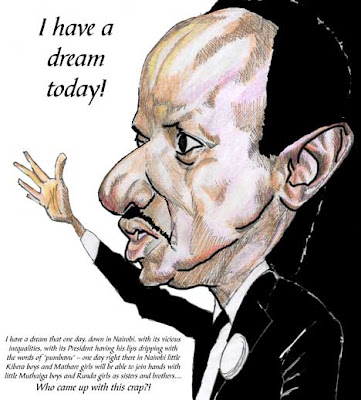 Kalonzo Musyoka: "I have a dream today! I have a dream that one day, down in Nairobi, with its vicious inequalities, with its President having his lips dripping with the words of "pumbavu" -- one day right there in Nairobi little Kibera boys and Mathare girls will be able to join hands with little Muthaiga boys and Runda girls as sisters and brothers... Who came up with this crap?!"

How about this for a campaign promise? Why not propose a law obligating all public servants (including the President, Cabinet Ministers, their assistants as well as MPs) to take their kids to public school and their families to public hospitals? More than any other measure, this would concentrate the minds of our famously selfish legislators and result in a world-class public health and education system in the shortest time possible. It would also eliminate the hypocrisy of the politicians recommending to the rest of us a system they themselves are unwilling to abide.

While such a policy is bound to be popular with the electorate, I don't expect to hear it from any of the current crop of presidential aspirants. Instead, I have to do with supposedly "realistic" promises that have nothing to do with the quality of education and healthcare offered at our schools and hospitals.

I recently posted my thoughts on Kalonzo Musyoka's promise of free secondary education if he secures the presidency in the forthcoming general elections. It has since come to my attention that when he was Minister for Education in 2000, he rejected the Koech report's TOTALLY INTEGRATED QUALITY EDUCATION AND TRAINING (TIQET) concept which among other things recommended expanding basic, universal and compulsory education from the current 8-year primary education to include secondary school (1 year, pre-primary, 7 years primary and 4 years secondary).

The report proposed a total overhaul of the country's education system, including pre-primary and tertiary levels. According to analysis by the Institute of Policy Analysis and Research, if effectively implemented, its 588 recommendations would have led to savings of up to 21% in the education budget by 2004 (as of 2000, compared to other Sub-Sahara African countries with similar GDP per capita, Kenya spent considerable more on education in relation to total Government expenditure (23.7%) and Gross National Product (7.4%). With free primary education, the figures are undoubtedly higher), while addressing issues of access, quality, relevance, dropout and retention. In response Kalonzo came up with a mysterious figure of 320 billion needed to implement the report (mysterious because the he never bothered to explain how he arrived at that figure) and instead chose to reform the system in bits starting with the primary and secondary curricula.

It is still unclear how Kalonzo intended to sort out the critical issues of access, quality, life-long learning, relevance, regional and gender equity, cost and finance of education by focusing on curricula. Since he has made education reform (if you can even call it that) his campaign's cause celebre, I think he needs to explain why, as in 2000, he has chosen to ignore early childhood education and the tertiary sector, which are key in the life-long learning cycle as well as emerging alternatives like non-formal education, whose target is to provide opportunities to those out of school. By proposing his limited scheme, he, like Kibaki, is in the words of Daily Nation's David Aduda "massaging rather than diagnosing and reforming an education system that was on the verge of collapse".

He now says that the country is able to offer free secondary schooling and doesn't bother to explain where the cash will come from, especially considering that the free primary education is already straining resources, and why we couldn't use those resources to implement the Koech report back in 2000. Anyone see a pattern here? Is it sensible to continue spending more resources in education and achieving less? Why not consider spending more in the short-run, less in the medium and long-term and achieving more for individuals and the country as a whole by implementing the Koech report?

you should check out my yahoo group, it's just getting started so I am looking for members to share their political views with me, as of yet I am the only member but you may join just to read what I have posted thus far and then remove your membership if you are not satisfied...